Gravitational microlensing is a phenomenally interesting way to find unusual things in the cosmos. A closer star can bend space around itself enough that, when it passes between us and a more distant star, a distinct brightening of the distant star’s light is apparent, a lens effect. That’s a useful phenomenon in its own right, and gravitational lensing involving distant galaxies is a significant part of some astronomers’ toolkits. But we can also use the effect when looking for exoplanets, and in the case of recent work, even a candidate for an exoplanet’s moon.

The method works in this context because if the foreground star has a planet orbiting it, a second lensing event can occur, and a comparison between the two brightening events can help us figure out the relative mass of the two objects. The problem with microlensing is that these are one-shot events, dependent on chance celestial alignments. In other words, we can’t go back and study them a second time. That’s a shame, because some studies have found what appear to be free-floating planets, an interesting find we’d like to learn much more about.

Now we have MOA-2011-BLG-262, a microlensing observation made by the Japan-New Zealand-American Microlensing Observations in Astrophysics (MOA) and the Probing Lensing Anomalies NETwork (PLANET) programs, working with telescopes in New Zealand and Tasmania. The work shows two objects, one of them about 2000 times smaller than the other. We are looking at either a small star and a planet about eighteen times as massive as Earth around it, or else a planet larger than Jupiter orbited by a moon less massive than Earth. 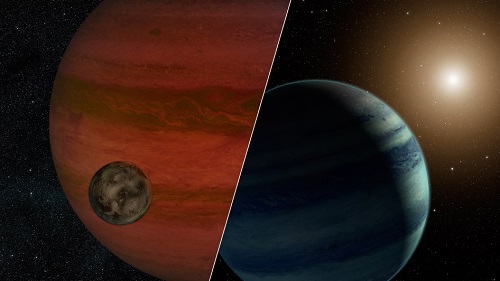 Image: Researchers have detected the first “exomoon” candidate — a moon orbiting a planet that lies outside our solar system. Using a technique called “microlensing,” they observed what could be either a moon and a planet — or a planet and a star. This artist’s conception depicts the two possibilities, with the planet/moon pairing on the left, and star/planet on the right. If the moon scenario is true, the moon would weigh less than Earth, and the planet would be more massive than Jupiter. Credit: NASA/JPL-Caltech.

The exomoon option seizes the attention because exomoons have yet to be detected, and pushing the limits of detectability down to this scale is a real achievement. But why the wide range between the two possibilities? The problem is that we don’t know how far away the two objects are. If they’re closer to the Earth, they’ll produce the same effect as a more massive pair — planet around star — would at a considerably larger distance. It’s possible to use parallax techniques, taking advantage not only of ground-based telescopes but of space assets like the Spitzer space telescope, but we don’t have that data for MOA-2011-BLG-262, which will remain a mystery.

Gravitational microlensing, then, gives us a sudden illumination of a distant stellar system, after which all hopes of future observations disappear. It’s like a sudden beam of light illuminating part of the cosmos whose effects disappear all too quickly, leaving us to ask questions like this one: If this is a rogue planet, and assuming it was ejected from a young planetary system by gravitational interactions there, how did it keep its moon, and how likely are such scenarios?

Meanwhile, we continue with the other methods in our arsenal, as highlighted, for example, by David Kipping’s Hunt for Exomoons with Kepler project, in hopes of answering questions about more conventional moons in actual solar systems. The paper is Bennett et al., “MOA-2011-BLG-262Lb: A Sub-Earth-Mass Moon Orbiting a Gas Giant Primary or a High Velocity Planetary System in the Galactic Bulge,” The Astrophysical Journal Vol. 785, No. 2 (2014), 155 (abstract).