Saturn: Commotion in the A Ring

After yesterday’s look back at the ambitious Project Orion planners and their hopes of reaching Saturn’s moons by the 1970s, let’s stay in the same vicinity today to look at what may be the emergence of an entirely new moon. As always, we have Cassini to thank for this work, which shows a disturbance at the outer edge of Saturn’s A ring. This is the outermost of the large, bright rings, with a width of approximately 14,600 kilometers. Its inner boundary is the Cassini division, a 4800 kilometer wide region between it and the B ring.

The image below shows the disturbance, an area in the shape of an arc that is about 20 percent brighter than its surroundings. The region is some 1200 kilometers long and 10 kilometers wide, and it is accompanied by breaks in the otherwise smooth profile at the edge of the ring. The current thinking is that both the arc and the protuberances are the result of gravitational effects caused by a nearby object. Are the rings, then, giving birth to a new moon? 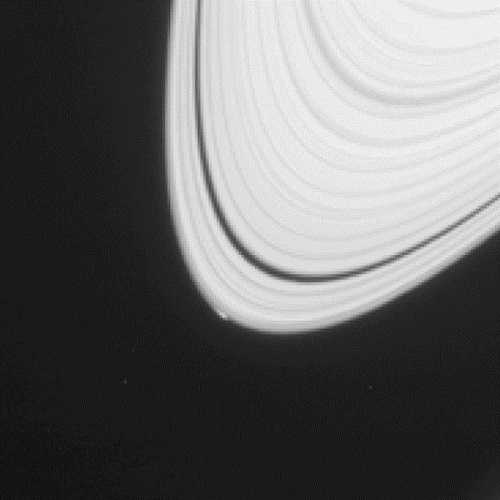 Image: The disturbance visible at the outer edge of Saturn’s A ring in this image from NASA’s Cassini spacecraft could be caused by an object replaying the birth process of icy moons. This view looks toward the illuminated side of the rings from about 53 degrees above the plane of the rings. It was obtained from a distance of approximately 775,000 miles (1.2 kilometers) from Saturn, with a sun-Saturn-spacecraft, or phase, angle of 31 degrees. The scale is about 7 kilometers per pixel. Credit: NASA/JPL-Caltech/Space Science Institute.

Informally dubbed ‘Peggy,’ the proto-moon, assuming that is what it is, cannot yet be resolved in Cassini’s imagery, although the spacecraft will move closer to the outer edge of the A ring in late 2016, perhaps offering an opportunity to study it in greater detail. Scientists estimate it to be no more than a kilometer in diameter, but the diminutive object could give us the chance to shake out a recent proposal that all the icy moons formed originally from ring particles before moving further away from the planet, growing over time as they merged with other moons.

“The theory holds that Saturn long ago had a much more massive ring system capable of giving birth to larger moons,” said Carl Murray (Queen Mary University, London), lead author of the paper on this work. “As the moons formed near the edge, they depleted the rings and evolved, so the ones that formed earliest are the largest and the farthest out.”

Many of Saturn’s moons are composed largely of ice, and they do indeed increase in size with distance from the planet. “We may,” adds Murray, “be looking at the act of birth, where this object is just leaving the rings and heading off to be a moon in its own right.” 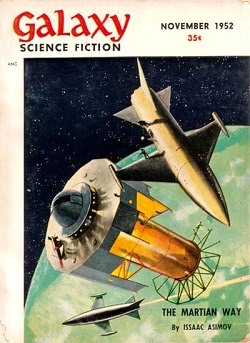 This news combined with the thought of using Enceladus to refuel a Project Orion vessel, as we discussed yesterday, somehow calls to mind Isaac Asimov’s story “The Martian Way,” a novella first published in Galaxy Science Fiction (1952) and later made available in The Martian Way and Other Stories (1955). Martian colonists make the trip to Saturn to bring back a cubic mile of ice that will supply the colony for 200 years. They, embed their ships in the ice block for the return even as they use its resources as reaction mass.

Martians, it turns out, are the perfect crew for deep space vehicles because — Gerald Driggers, author of the Earth-Mars Chronicles, will like this — they’ve been forced to acclimatize to cramped conditions and the rigors of space travel. Asimov’s characters look down upon the unfortunate planet-bound population of Earth and discuss what they see as an inevitable future:

“Even if they come to Mars, it will only be their children that are free. There’ll be starships someday: great huge things that can carry thousands of people and maintain [their] self-contained equilibrium for decades, maybe centuries. Mankind will spread through the whole Galaxy. But people will have to live their lives out on shipboard until new methods of interstellar travel are developed, so it will be Martians, not planet-bound Earthmen, who will colonize the Universe. That’s inevitable. It’s got to be. It’s the Martian way.”

The new work on the A-ring anomaly is Murray et al, “The discovery and dynamical evolution of an object at the outer edge of Saturn’s A ring,” published online by Icarus, 28 March 2014 (abstract).

Next post: A New Look at Sea Floor Astrobiology