Last week’s announcement about Kepler-186f presented a world that is evidently in the outer reaches of its star’s habitable zone, with the usual caveats that we know all too little about this place to draw any conclusions about what is actually on its surface. Is it rocky, and does it have liquid water? Perhaps, but as Greg Laughlin (UC-Santa Cruz) points out on his systemic site, the widely circulated image of Kepler-186f was all but photographic in its clarity. Listen to Laughlin as he looks at the image:

I stared at it for a long time, tracing the outlines of the oceans and the continents, surface detail vivid in the mind’s eye. Yes, ice sheets hold the northern regions of Kepler-186f in an iron, frigid grip, but in the sunny equatorial archipelago, concerns of global warming are far away. Waves lap halcyon shores drenched in light like liquid gold.

He goes on to look at how the press has handled earlier stories on habitable planets, dating back to the Gliese 581c frenzy of 2007. And you can see the evolution in artist’s renderings of the various worlds under discussion, culminating in a Kepler-186f image that could indeed be misconstrued as a photograph by someone who didn’t realize the limits of our capabilities. Here’s the image again (credit: NASA Ames/SETI Institute/JPL-Caltech): 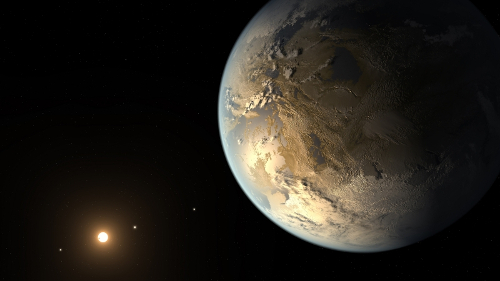 It’s beautiful work, and I ran it last Thursday along with my story on the new planet. But we have to be careful not to get too far ahead of ourselves. Yes, researchers tracking the exoplanet hunt understand that this is entirely conjectural, but upon reflection, I think we’re sending a signal to the general public that we’re more confident about what these worlds are like than is justified. In the case of Kepler-186f, the fact that a planet is close to Earth-sized does not render it Earth’s twin in any other meaningful way, especially given that the planet orbits a red dwarf and pulls in only about a quarter of the insolation that Earth receives.

The Benefits of Axial Tilt

What we do surmise about habitable zones keeps getting tweaked around the edges, and on a more theoretical plane, the work on planets with ‘tilted’ orbits — this comes out of the University of Washington, Weber State and NASA — is intriguing because it pushes liquid water on the surface much further out than earlier habitable zone notions would allow. The paper, which appears in the April Astriobiology may, in fact, expand the habitable zone by ten to twenty percent, which would greatly increase the number of planets suitable for life.

We’re talking about planets whose axis has been tilted from their orbital plane thanks to gravitational interactions with other planets in the system. The contention here is that a fluctuating tilt in a planet’s orbit may enhance rather than diminish the chances for life, because glaciation becomes more difficult when polar regions melt thanks to the erratic spin. Says Rory Barnes (University of Washington), “…the rapid tilting of an exoplanet actually increases the likelihood that there might be liquid water on a planet’s surface.” From the paper: 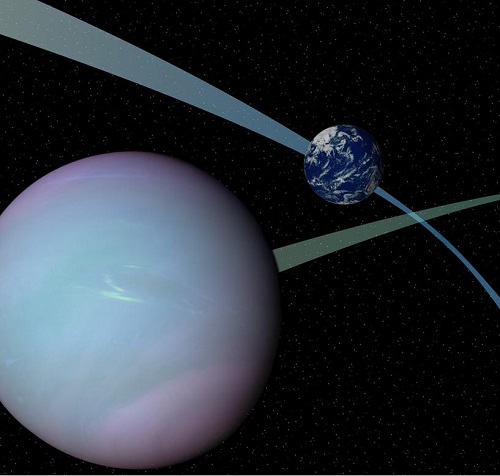 Image: Tilted orbits such as those shown might make some planets wobble like a top that’s almost done spinning, an effect that could maintain liquid water on the surface, thus giving life a chance. Credit: NASA/GSFC.

One consequence is that future searches for living planets might be extended farther from the target star, given the deeper habitable zone available, a result with a bearing on how difficult it is to separate stellar and reflected planetary light. The researchers do point out in their conclusion that their simulations all began with planetary spin rates of 24 hours and obliquities of 23.5 degrees, clarifying the need for future work on a wider range of initial conditions. In particular, does a specific solar system ‘architecture’ always produce a particular obliquity cycle?

Interesting stuff, and bear in mind that it could have ramifications on another theory, that planets need a large, stabilizing moon to be suitable for life. The Earth’s axial tilt of 23.5 degrees would, in the absence of Luna, increase to the point where climate fluctuations became more extreme. This could be problematic for planets in orbits like ours, but at the outer edge of the habitable zone, in this view, those fluctuations could be precisely what is needed to prevent ice from becoming global, making the lack of a moon is a distinct plus. Large moons, then, may have a role to play in both directions, depending on the planet’s position in the habitable zone.