Gravitational lensing is a technique rich enough to help us study not only distant galaxies but exoplanets around stars in our own Milky Way. As gravity warps space and time, light passing near a massive object takes the shortest route, from our perspective seeming to be bent by the gravitational field. Inside the Milky Way, such effects are referred to as ‘microlensing,’ capable of magnifying the light of a more distant object and sometimes revealing the presence of an unseen planet around the intervening star. Now we have a Kepler find with implications for binary stars.

Working with Eric Agol at the University of Washington, graduate student Ethan Kruse has discovered a ‘self-lensing’ white dwarf eclipsing binary system. He made the find while looking for transits in the Kepler data, the signatures of planets crossing in front of their stars as seen from Earth. KOI-3278 turned out to have an unusual signal, says Kruse:

“I found what essentially looked like an upside-down planet. What you normally expect is this dip in brightness, but what you see in this system is basically the exact opposite — it looks like an anti-transit.” 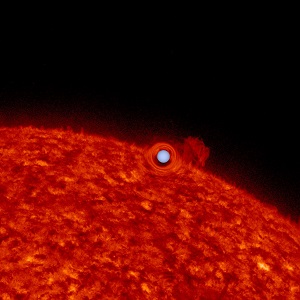 In other words, a transiting planet causes a dip in the overall light of the star that shows up in the well known lightcurves that have flagged the presence of so many Kepler planets. Kruse was seeing not a dip but a surge in brightness, the apparent result of movement within this binary star system. 2600 light years away in the constellation Lyra, KOI-3278 is now known to be made up of two stars with an orbital period of 88.18 days, one of them a white dwarf, separated by about 70 million kilometers. The brightness surge is the white dwarf’s lensing effect upon the star it passes in front of as we view the system. The lensing effect allows the mass of the white dwarf to be measured as roughly 63 percent the mass of our Sun.

Image: An image of the Sun used to simulate what the sun-like star in a self-lensing binary star system might look like. Credit: NASA.

It was about a year ago that Philip Muirhead (Caltech) and colleagues published their own findings, likewise based on Kepler data, of a white dwarf being orbited by an M-class dwarf that was, although larger, less massive than the white dwarf it circled. KOI-256 looked at first glance to show the signature of a gas giant planet eclipsing the red dwarf, but radial velocity follow-up studies using the Hale instrument at Palomar Observatory demonstrated that the intervening object was a white dwarf. The KOI-256 data showed the same brightening effects that Kruse found with KOI-3278, although the microlensing in the former was not nearly as powerful.

In both cases, refined mass measurements of the white dwarf have followed, as well as more accurate analysis of the mass and temperature of both stars. Kruse and Agol think the effect can be used in follow-up observations to reveal the white dwarf’s size, and have applied for time on the Hubble Space Telescope to study the system in greater detail. We may or may not find more systems like this in the Kepler data, but the KOI-3278 discovery gives us yet another way to use the extremely subtle effects of microlensing. In this case, the lensing is a repeatable phenomenon as the two stars orbit each other, not the case with most microlensing events.