We’re developing a model for the fascinating planetary system around the binary star 55 Cancri, a challenging task given the complexity of the inner system in particular. What we have here is a G-class star around which five planets are known to orbit and a distant M-dwarf at over 1000 AU. Have a look at the diagram below and you’ll see why the system, 39 light years away in the constellation Cancer, draws so much attention. It’s much more than the fact that direct measurements of the G-class star’s radius are possible at this distance, which have led to precise measurements of its mass, about the same as our Sun. It’s also the tightly packed configuration of the inner planets. 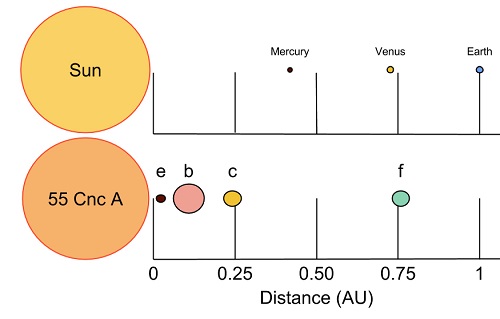 Image: An illustration of the orbital distances and relative sizes of the four innermost planets known to orbit the star 55 Cancri A (bottom) in comparison with planets in own inner Solar System (top). Both Jupiter and the Jupiter-mass planet 55 Cancri “d” are outside this picture, orbiting their host star with a distance of nearly 5 astronomical units (AU), where one AU is equal to the average distance between the Earth and the Sun. Credit: Center for Exoplanets and Habitable Worlds, Penn State University.

First discovered to be orbited by a giant planet in 1997, 55 Cancri A has been the subject of numerous studies in the years since. We have five planets in total, one a cold gas giant evidently similar to Jupiter and in a similar orbit and another, of particular interest, a ‘super-Earth’ in close proximity to the host star. This world, 55 Cancri e, was thought until 2011 to orbit the star in three days, but astronomers then determined that its complete orbit took less than 18 hours. The software developed by Penn State graduate student Benjamin Nelson and Eric Ford (Penn State Center for Astrostatistics) has pegged the mass of 55 Cancri e at eight Earth masses.

A quick note on nomenclature: The formal designation for the innermost world here should be 55 Cancri A e, with the other planets referred to accordingly. I’m following the just published paper on this work in referring to it as 55 Cancri e, without reference to the distant M-dwarf.

The transiting world is now known to have a radius twice that of Earth and a density about the same as our planet. Another glance at the diagram shows that this is a world far too hot for life as we know it, reaching temperatures in the range of 2300 Kelvin. The computations of Nelson and Ford draw the details of 55 Cancri e out of the motions of the giant planets 55 Cancri b and c, worlds that although orbiting outside the orbit of 55 Cancri e are still located closer to the star than Mercury is to our Sun. The new techniques help us understand how large planets like these can orbit so close to their star without collision or the expulsion of one of the two worlds.

The motion of the inner giant planets has to be accounted for to measure the detailed properties of the ‘super-Earth,’ and Ford notes that most previous work on this system had ignored their interactions. Nelson explains the significance of understanding the stability of their orbits:

“These two giant planets of 55 Cancri interact so strongly that we can detect changes in their orbits. These detections are exciting because they enable us to learn things about the orbits that are normally not observable. However, the rapid interactions between the planets also present a challenge since modeling the system requires time-consuming simulations for each model to determine the trajectories of the planets and therefore their likelihood of survival for billions of years without a catastrophic collision.”

1418 radial velocity observations from four observatories went into this work along with transit studies for 55 Cancri e, out of which orbital solutions stable for a minimum of 108 years emerge. The researchers evolved four- and five-planet models as they examined instabilities in the system, coupling their work with radial velocity observations to constrain the planet masses and orbital parameters that produce dynamically stable solutions. As the paper notes, “By combining a rigorous statistical analysis, dynamical model and improved observational constraints, we obtain the first set of five-planet models that are dynamically stable.” Another interesting finding: 55 Cancri d turns out to be “the closest Jupiter analog to date” in terms of orbital period and eccentricity.