Kevin Luhman (Pennsylvania State University) has focused much of his research on the formation of low-mass stars and brown dwarfs in star-forming regions near the Sun. This involves working with relatively young stars, but Luhman is also on the alert for older objects, very cool brown dwarfs in the solar neighborhood. Brown dwarfs cool over time, and as Luhman describes on his university web page, they are ‘valuable laboratories for studying planetary atmospheres.’ They also give us a chance to test theories of planet formation in extreme environments. 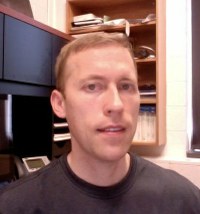 Now we have Luhman’s latest, and it would not be a surprise if the whole category of nearby, cool stellar objects begins to get referred to as ‘Luhman objects’ or some such. Remember that it was just back in March that the astronomer discovered, using WISE images, a binary brown dwarf system at a scant 6.5 light years from Earth. The new find is WISE J085510.83-071442.5. It has the third highest proper motion and the fourth largest parallax of any known star or brown dwarf, and can lay claim to being, at least for a time, the coldest brown dwarf on record.

Image: Penn State’s Kevin Luhman, a specialist in low mass stars and brown dwarfs, who is filling in our map of such objects close to the Sun.

How cold? This object is thought to be between -48 to -13 degrees Celsius, colder than previous record holders, which were found to be close to room temperature. WISE imagery from 2010 was confirmed by two additional images taken by Spitzer in 2013 and 2014, with further observations at the Gemini South telescope on Cerro Pachon in Chile. The WISE and Spitzer data were used to measure the distance to the object via parallax. It turns out to be 7.2 light years away, fitting nicely into the chart below, which shows the Sun’s immediate neighborhood. 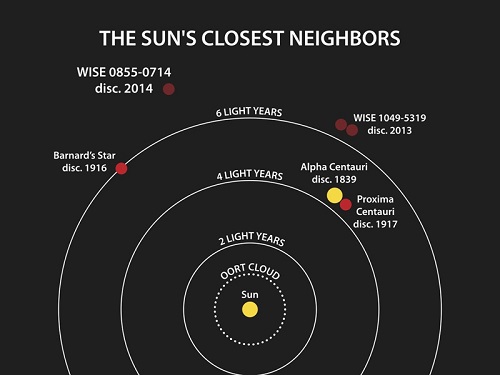 Image: This diagram illustrates the locations of the star systems closest to the sun. The year when the distance to each system was determined is listed after the system’s name. NASA’s Wide-field Infrared Survey Explorer, or WISE, found two of the four closest systems: the binary brown dwarf WISE 1049-5319 and the brown dwarf WISE J085510.83-071442.5. NASA’s Spitzer Space Telescope helped pin down the location of the latter object. The closest system to the sun is a trio of stars that consists of Alpha Centauri, a close companion to it and the more distant companion Proxima Centauri. Credit: NASA/Penn State University.

That’s a fascinating chart, and while all of us can share the determination to learn more about brown dwarf and planet formation and the atmospheres of cold objects, some of us also think in terms of targets for future probes, hoping that brown dwarf hunter Luhman may turn up something even closer than the three he has already discovered. Objects as cool as Luhman’s latest can all but disappear at visible wavelengths, but their infrared glow makes detection possible, with surely more to come. Thus Michael Werner, a Spitzer project scientist at JPL:

“It is remarkable that even after many decades of studying the sky, we still do not have a complete inventory of the sun’s nearest neighbors. This exciting new result demonstrates the power of exploring the universe using new tools, such as the infrared eyes of WISE and Spitzer.”

We’re talking about an object somewhere between 3 and 10 times the mass of Jupiter, which makes WISE J085510.83-071442.5 one of the least massive brown dwarfs known, if indeed it is a brown dwarf rather than a free-floating gas giant that has been expelled from some undetermined star system. Luhman comments on the latter possibility in the paper on this work:

At this mass, WISE 0855−0714 could be either a brown dwarf or a gas giant planet that was ejected from its system. The former seems more likely given that the frequency of planetary-mass brown dwarfs is non-negligible while the frequency of ejected planets is unknown. Assuming that WISE 0855−0714 is a Y dwarf, the four closest known systems now consist of two M dwarfs and one member of every other spectral type from G through Y. 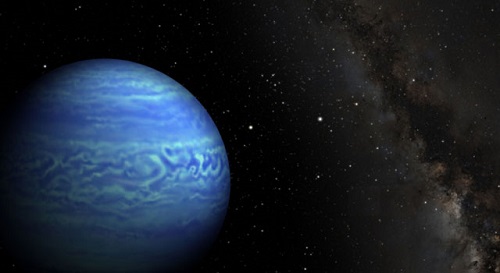 Image: This artist’s conception shows the object named WISE J085510.83-071442.5, the coldest known brown dwarf. Brown dwarfs are dim star-like bodies that lack the mass to burn nuclear fuel as stars do. WISE J085510.83-071442.5 is as cold as the North Pole (or between minus 48 to minus 13 degrees Celsius). The color of the brown dwarf in this image is arbitrary; it would have different colors when viewed in different wavelength ranges. Credit: NASA/JPL-Caltech/Penn State University.

The paper goes on to note that the newly discovered brown dwarf now offers the chance to test various atmospheric models in an unexplored temperature regime, something that will require refining the parallax measurement and ‘deeper near-IR photometry to better constrain its spectral energy distribution.’ We’ll also need to take advantage of near-term advances in our spectroscopy of the sort the James Webb Space Telescope should make available.

Next post: Night and Day on β Pictoris b