Stanley G. Weinbaum is best known for the 1934 short story “A Martian Odyssey,” lionized by readers and critics alike after it appeared in the July issue of Wonder Stories. Isaac Asimov would later opine that “A Martian Odyssey” was one of a handful of stories that changed the way all later science fiction was written. But Weinbaum’s depiction of a genuinely alien being called Tweel sometimes obscures his other work, which you can find collected in The Best of Stanley G. Weinbaum (1974), a worthwhile addition to the library of any SF fan, and a reminder of the loss the genre suffered when the author died at age 33. 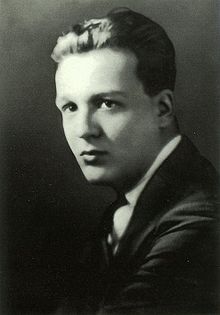 This morning I’ve been thinking back to a little known Weinbaum story called “Redemption Cairn,” which ran in the March, 1936 Astounding Stories and which, because I have a good run of Astounding issues from that era, sits not ten feet away from me on my shelf. I don’t know if this is the first appearance of Europa in science fiction, but “Redemption Cairn,” with its exotic biosphere in a valley on the moon, shows us a time when Jupiter was thought to produce enough heat to make the Galilean moons habitable. Arthur C. Clarke would imagine a warm Europa as well, but his, in 2061 Odyssey Three (1988) was the result of Jupiter’s transformation into a small star and the birth of a biosphere.

One thing we’re not going to find when we get a dedicated probe to Europa is a tropical habitat, but the musings of science fiction writers remind us that we shape our aspirations around our dreams, and the encounter with the unknown becomes just as meaningful in real life whether the ocean we’re probing lies under balmy skies or a kilometers-thick layer of ice. Want to see an icy, science fictional Europa? Try Kim Stanley Robinson’s Galileo’s Dream, in which the astronomer is transported from Padua into the depths of Europa’s deep ocean.

A NASA Request for Information

Galileo had plenty of Europan connections, from being the person who discovered the moon to having his name attached to the spacecraft that sent us our best images of the surface. Like all of us, NASA would like more information about Europa than the Galileo mission could provide, and while it takes science fiction to get us into the Europan ocean for now, down the road we may have more concrete options. The agency’s recent issuance of a Request for Information (RFI) asks the scientific and engineering communities to come up with ideas that can help us answer some of our longest-standing questions. The ultimate goal: A $1 billion mission (excluding launch) that can achieve the following goals, or at least as many of them as possible:

These requirements come from the National Research Council’s 2011 Planetary Science Decadal Survey. Why we need a mission like this is clear enough. For all its achievements, Voyager could give us nothing more than a quick flyby, and while the Galileo spacecraft was able to make repeated flybys (fewer than a dozen), it labored under serious communications problems with the failure of its high-gain antenna. We’ve seen what Cassini can do in the Saturn system with repeated observations of high-value targets like Titan and Enceladus, but Europa is a tough nut to crack, particularly given the radiation environment that surrounds Jupiter.

For more on the RFI, whose deadline is May 30, visit the NSPIRES site. NASA has been funding work into mission concepts and in particular the science instruments that will be needed for Europa, including possible ways to penetrate surface ice. The Decadal Survey considers a Europa mission among the highest priority scientific pursuits for the agency, and the recent findings from Hubble of possible water vapor ejections from the moon’s surface add punch to the statement. The RFI, says John Grunsfeld, associate administrator for the NASA Science Mission Directorate at the agency’s headquarters, “is an opportunity to hear from those creative teams that have ideas on how we can achieve the most science at minimum cost.” 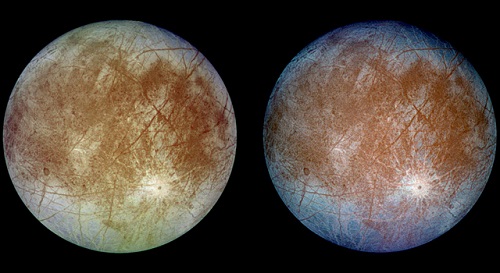 Image: Two views of the trailing hemisphere of Jupiter’s ice-covered satellite, Europa, returned by the Galileo spacecraft. The left image shows the approximate natural color appearance of Europa. The image on the right is a false-color composite version combining violet, green and infrared images to enhance color differences in the predominantly water-ice crust of Europa. Dark brown areas represent rocky material derived from the interior, implanted by impact, or from a combination of interior and exterior sources. Bright plains in the polar areas (top and bottom) are shown in tones of blue to distinguish possibly coarse-grained ice (dark blue) from fine-grained ice (light blue). Long, dark lines are fractures in the crust, some of which are more than 3,000 kilometers (1,850 miles) long. The bright feature containing a central dark spot in the lower third of the image is a young impact crater some 50 kilometers (31 miles) in diameter. This crater has been provisionally named “Pwyll” for the Celtic god of the underworld. Credit: NASA/JPL.

But back to science fiction, and Kim Stanley Robinson, a fine science fiction author indeed. In Galileo’s Dream, before the celestial voyaging that will give Galileo a much closer look at what he sees in his telescope, Robinson depicts the discovery of the Galilean moons: 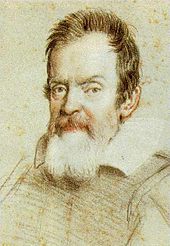 On the night of January 12, Galileo trained the glass on Jupiter in the last moments of twilight. At first he could see again only two of the little bright stars, but an hour later, when it was fully dark, he checked again, and one more had become visible, very close to Jupiter’s eastern side.

He drew arrows trying to clarify to himself how they were moving, shifting his attention between the view through the glass and his sketches on the page. Suddenly it became clear, there in the reiterated sketches: the four stars were moving around Jupiter, orbiting it in the same way the moon orbited the Earth. He was seeing circular orbits edge-on; they lay nearly in a single plane, which was also very close to the plane of the ecliptic, in which the planets themselves moved.

He straightened up, blinking away the tears in his eyes that always came from looking too long, and that this time came also from the sudden urge of an emotion he couldn’t give a name to, a kind of joy that was also shot with fear. “Ah,” he said. A touch of the sacred, right on the back of his neck: God had tapped him. He was ringing.

The pace of space exploration is sometimes frustrating, particularly when we gauge it against the optimism of the Apollo era and the dreams of von Braun. But when I think about Europa and our opportunities there, I always think back to this passage in Robinson, and ultimately back to Galileo himself. We have come so far since the days when he identified those bright objects around Jupiter as moons. Surely the drive for discovery — the zest, the enchantment of it — that drove Galileo is something hard-wired into our species, a sort of ‘ringing,’ as Robinson describes it, or perhaps a kind of inner fire that won’t allow us to turn away from these explorations.

Previous post: Night and Day on β Pictoris b