A Layered Ocean within Ganymede?

Remember as you ponder NASA’s Request for Information about a Europa mission that the agency is contributing three instruments to the European Space Agency’s JUpiter ICy moons Explorer (JUICE) mission, to be operational in Jupiter space in the 2030s. The goal here is to explore Europa, Callisto and Ganymede through numerous flybys, with the craft finally settling into orbit around Ganymede. This would be the first serious look at multiple Jupiter moons by a visiting spacecraft since the Galileo mission, which explored the system from 1995 to 2003.

The large Jovian moons have always been of interest, with not just Europa but Callisto and Ganymede also thought to have deep oceans beneath their icy crusts. Galileo, in fact, found evidence for salty seas within Ganymede, probably containing magnesium sulfate. At the Jet Propulsion Laboratory, a team led by Steve Vance is offering new research showing that what we may have on Ganymede is more than a simple sea between two layers of ice. Using computer modeling of the processes involved, the scientists are talking about regions of ice and oceans stacked in layers. “Ganymede’s ocean might be organized like a Dagwood sandwich,” says Vance. 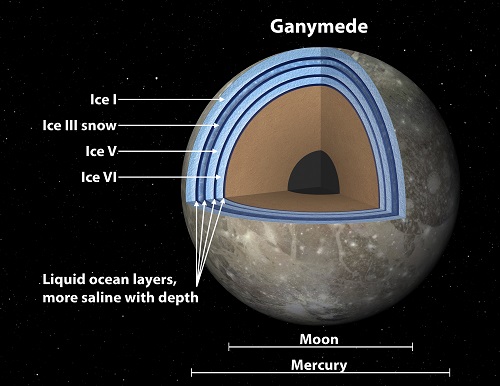 Image: This artist’s concept of Jupiter’s moon Ganymede, the largest moon in the solar system, illustrates the “club sandwich” model of its interior oceans. Scientists suspect Ganymede has a massive ocean under an icy crust. Previous models of the moon showed the moon’s ocean sandwiched between a top and bottom layer of ice. A new model, based on experiments in the laboratory that simulate salty seas, shows that the ocean and ice may be stacked up in multiple layers, more like a club sandwich. Credit: NASA/JPL.

Larger than Mercury, Ganymede may have 25 times the volume of water found on Earth. The JPL work, reported in a new paper in Planetary and Space Science, suggests that the sea bottom in the various layers may not be coated with ice but with salty water. Earlier models had shown the probability of dense ice at the bottom of a huge ocean with enormous pressures, but Vance’s team added salt to its models and found that liquid dense enough to sink to the sea floor was the result. Salt, as it turns out, makes the ocean denser, particularly under the extreme pressure conditions found within Ganymede and other moons.

Oceanic pressure on Ganymede would be high, for the moon’s oceans may be up to 800 kilometers deep. The deepest, densest form of ice thought to exist on Ganymede is known as Ice VI. If ordinary refrigerator ice (Ice I) floats in a glass of water, heavier forms of ice produced by extreme pressures show much more compact crystalline structure, with the molecules packed more tightly together, which is why some forms of ice can fall to the bottom of the ocean.

That would seem to produce an icy ocean floor, making potentially life-producing chemical interactions between water and rock unlikely. But the team’s models show up to three ice layers and a rocky seafloor, with the lightest ice on top and salty, dense liquid at the bottom. Moreover, the layers in the diagram above account for odd phenomena, with Ice III in the uppermost ocean layer being formed in the seawater and salts precipitating out. As the heavier salts begin to settle to the bottom, the lighter ice would float upward, perhaps melting again before it reaches the top of the ocean or leaving slush layers in the Ganymede ocean. When it’s snowing on (or within) Ganymede, in other words, the snow floats up, not down.

This JPL news release offers more, including the notion that the ‘club sandwich’ structure the researchers describe varies over time, sometimes returning to a single ocean found below a layer of Ice I and existing on top of regions of different high-pressure ices. In any case, the idea of chemical interactions where water and rock meet is intriguing from an astrobiological viewpoint, suggesting that a wet seafloor could produce the necessary conditions for life. The salts the Vance team added to its model can produce a sea bottom with the needed dense liquids.