Our recent discussions of the Jovian moons Ganymede and Europa highlight a fact that not so long ago would have seemed absurd. Three of the four bright dots that Galileo saw through his primitive telescope around Jupiter are potential habitats for life. Even battered Callisto gives evidence of an internal ocean, as do, of course, both Ganymede and Europa. But why stop there? Further out, Titan is worth exploring both on the surface and under it, and tiny Enceladus may be both the easiest to study and the most bizarre astrobiological possibility we’ve yet found.

The ‘easy to study’ part comes from the fact that Enceladus conveniently spews vapor from its own internal reservoirs into space, making it possible for a space probe to analyze the contents without ever touching down on the surface. The ‘bizarre’ part comes from the fact that those fissures exist, surely a sign of Saturn’s gravitational grip upon the flexing moon, but also a reminder that these outer moons have leaped into our consciousness as liquid water-bearing places. Remember, it wasn’t that long ago that we assumed Europa itself would be just another crater-scarred, inert ball of rock and ice. The Voyager missions changed everything.

Lee Billings is sufficiently encouraged by facts like these to put Europa at the very top of his list of destinations, speculating in his new essay in Aeon Magazine that our enthusiasm for Mars may be misplaced. We’re always ‘following the water,’ knowing that water helps in the transmission of biochemical energy, nutrients and waste, not to mention its shielding effects against cosmic radiation and its ability to retain warmth. But Billings, the author of Five Billion Years of Solitude (Current, 2013) sees our current Mars efforts as ‘cautious and procedural, perhaps to a fault, as a result of past overreaches in the search for Martian life.’

Indeed, scientists who specialise in Mars have been forced to dial down their dreams, hypothesising ever-smaller windows of opportunity for past life on the red planet, and ever more inaccessible refuges for anything now living there. Native Martians, if they exist at all, are most probably microbes clinging to life almost unreachably deep beneath the surface. This does not diminish the importance of exploring our neighbouring planet, but it must be admitted that there might well be more promising places to seek alien life. Indeed, if following the water is the prime directive in the search for extraterrestrial life, it increasingly appears that we should look beyond Mars to an icy moon of Jupiter called Europa. 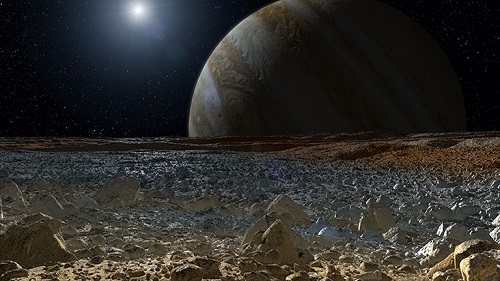 Image: This artist’s concept shows a simulated view from the surface of Jupiter’s moon Europa. Europa’s potentially rough, icy surface, tinged with reddish areas that scientists hope to learn more about, can be seen in the foreground. The giant planet Jupiter looms over the horizon. Credit: NASA/JPL-Caltech

The russet upwellings of mineral salts that mark Europa’s cracks and fissures helped us see that a warm ocean sustained by Jupiter’s tidal forces and the flexing of the interior could exist, and that that ocean could have existed for billions of years. Imagine finding evidence that life of some kind existed under that ice. The discovery would implicate the other moons I’ve mentioned, and could, as Billings reminds us, take us out as far as Pluto in the hunt for subsurface water, looking for tidal heating or radioactive decay as sources of a comfy astrobiological warmth.

Europa, of course, is a very tough nut to crack. For one thing, you’re dealing with magnetic fields around Jupiter that produce extreme radiation hazards not just for manned missions but robotic orbiters, which adds greatly to the cost of any contemplated mission. Then there’s the matter of Europa’s crust, which might be a few kilometers deep or a hundred. Here the Enceladus model may come to our rescue, for just as Enceladus vents subsurface materials into space, so too may Europa. It was just last year that the Hubble Space Telescope was used to detect water vapor here — an estimated 7000 kg of water per second — blown 200 kilometers into space.

Fly a mission through these plumes and it should be possible to learn a great deal about what’s going on by way of chemical and physical processes beneath the ice, perhaps even evidence of biological activity or, as Billings adds with a touch of whimsy, ‘you might even catch a flash-frozen fish.’ For that matter, a robotic lander near a Europan fissure might snare highly interesting results. Sure, Mars is a much easier target, but look at the sheer number of orbiters and landers both in place and planned and contrast that commitment to the less than $1 billion NASA is now targeting as the pricetag for the Europa mission it’s gathering concepts for. 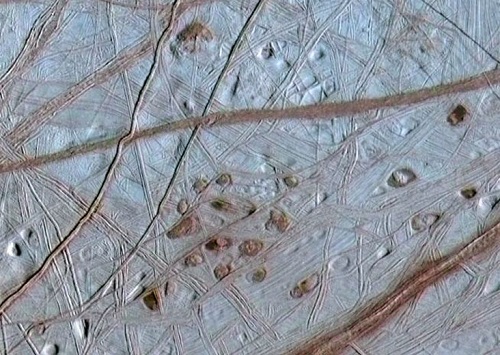 Image: Reddish spots and shallow pits pepper the enigmatic ridged surface of Europa in this view combining information from images taken by NASA’s Galileo spacecraft during two different orbits around Jupiter. The spots and pits visible in this region of Europa’s northern hemisphere are each about 10 kilometers across. The dark spots are called “lenticulae,” the Latin term for freckles. Their similar sizes and spacing suggest that Europa’s icy shell may be churning away like a lava lamp, with warmer ice moving upward from the bottom of the ice shell while colder ice near the surface sinks downward. Other evidence has shown that Europa likely has a deep melted ocean under its icy shell. Ruddy ice erupting onto the surface to form the lenticulae may hold clues to the composition of the ocean and to whether it could support life. Credit: NASA/JPL/University of Arizona/University of Colorado.

Even if Mars proves totally, irrevocably dead, one can still squint up at its ruddy disk in the night sky, and envision a better future for it. Someday, humans might walk there, perhaps even live. No one has such dreams for Europa. If Mars is a warped mirror we stare into, while imagining ourselves as explorers in some pleasantly familiar frontier future, then Europa must be a locked door, or maybe a matte-black monolith, cold and indifferent, an abyss that might, some day, gaze back at us, if only we could first convince ourselves to look.

I like that, especially the nod to Clarke’s monoliths, and I thought about the distance between Bradbury and Clarke as I absorbed Lee’s essay. Clarke went to Mars as well, in The Sands of Mars (1951), his first published novel, while Bradbury’s Mars was a splendid, visionary dream sequence. Both writers depicted a Mars that could be tamed by humans, but it’s the mysterious Europa of Clarke’s Space Odyssey series that draws me more.

Clarke had planned to delay 2061: Odyssey Three until the Galileo mission to Jupiter was operational, but he went ahead after that mission’s launch delay, so that when the book was published in 1987, it couldn’t have drawn on any of the Galileo findings. But even with Galileo’s imagery, Europa’s hidden depths are still enigmatic, their exciting promise hidden by their layered ice. Clarke’s Europa would be all about transformation as an ignited Jupiter (‘Lucifer’) heated up all the Jovian moons to bring life to a once desolate system.

What might come out of a thawed Europan ocean in a scenario like that? Life is all about transfiguration — it emerges out of an environment, changes and is changed by that environment — and we are left to wonder how complex it might become given the right mix of oxidized mineral salts filtering back down through the fractured Europan ice and the chemical reactions near deep water hydrothermal vents. The prospect is so compelling, the possibilities so alien to our earlier conceptions of the Galilean moons, that surely we can come up with a mission following up ESA’s Jupiter Icy Moons Explorer (JUICE) to make the 2030s the decade of Europa.