GU Piscium b: Tuning Up our Imaging

How do you go about characterizing a directly imaged planet around another star? In the absence of a transit, one way is to apply theoretical models of planetary formation and evolution to the light spectrum you’re working with. When a team of researchers led by Marie-Ève Naud (a graduate student at the Université de Montréal) used these methods on direct imaging data from four different observatories to characterize a planet 155 light years from the Earth, they arrived at a temperature of some 800 degrees Celsius. The work drew inferences based upon the location of the newly detected world. For the planet, GU Piscium b, orbits a star that is a member of the AB Doradus moving group, some 30 stars that move together with the star AB Doradus.

The AB Doradus association is helpful because a moving group is made up of stars of roughly the same age and metallicity, a sign they probably formed in the same location. The fact that these are young stars, perhaps 100 million years old, also helped the team pull together an estimate of the planet’s mass, some 9 to 13 times that of Jupiter. The striking thing about GU Piscium b is that it orbits at about 2000 AU, the farthest exoplanet from its host that I am aware of. A single trip around its star would take GU Piscium b some 80,000 years. That distance makes infrared detection possible, particularly since young planets like this are still cooling and are therefore brighter. 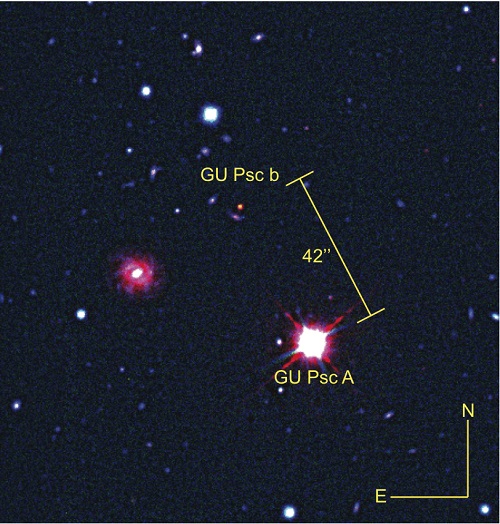 Image: The planet GU Piscium b and its star GU Piscium. This image is composed of visible and infrared images from the Gemini South telescope and an infrared image from the CFHT. Because infrared light is invisible to the naked eye, astronomers use a color code in which infrared light is represented by the color red. GU Piscium b is brighter in infrared than in other filters, which is why it appears red in this image. Credit: Gemini Observatory/OMM/CFHT/W.M. Keck Observatory.

René Doyon, director of the Observatoire Mont-Mégantic (OMM) some 200 kilometers east of Montreal, calls GU Piscium b “a true gift of nature,” noting that its large distance from the star means a number of instruments can study it in depth, including smaller telescopes like the one at OMM. In this case, the work also involved the Gemini Observatory, the Canada-France-Hawaii Telescope (CFHT) and the W.M. Keck Observatory, whose combined resources produced images at a variety of wavelengths. Having such a clearly defined object for direct imaging studies should be helpful as we work on imaging planets closer to their stars.

On that score, a nod to the debut of the Gemini Planet Imager (GPI), whose first image produced the high-quality result shown below. This is Beta Pictoris b, some 63 light years from Earth, seen through a single 60-second exposure. The GPI’s advanced optics can detect planets down to Jupiter mass orbiting stars similar to the Sun, whereas the previous generation of adaptive optics could image planets no smaller than three times Jupiter’s mass, and only planets as far from their star as Saturn or Neptune is from the Sun. 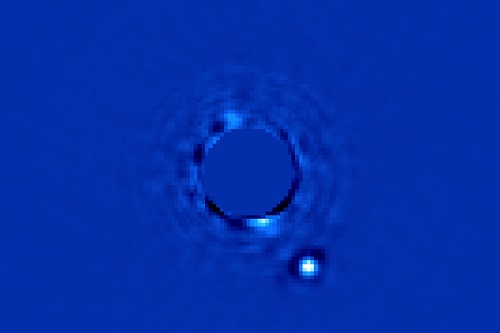 Image: The bright white dot is the planet Beta Pictoris b, glowing in the infrared light from the heat released when it was formed 10 million years ago. The bright star Beta Pictoris is hidden behind a mask at the center of the image. (Image processing by Christian Marois, NRC Canada).

So we’ve had only a few planets directly imaged, but we’re making progress. Enough so that Bruce Macintosh, principal investigator on the GPI project, predicts in the team’s paper on this work that the planet may transit the host star in 2017, based on information gleaned from the GPI dataset, which yielded clues to the planet’s orbit. A transit of a directly imaged planet would open up in-depth investigation of the planet’s characteristics — remember that Kepler, although it has found thousands of transiting worlds, cannot produce direct imagery of any of them.

And no, not even the Gemini Planet Imager, in operation since November at its site in Chile, will let us see planets as small as the Earth. But Macintosh sees a continued and positive evolution in our capabilities. “…[I]t’s a step on the road,” he added. “Some day a future space telescope will use the same technology, and be able to see an Earth around one of these nearby stars.”

The Beta Pictoris b paper is Macintosh et al., “First light of the Gemini Planet Imager,” published online by Proceedings of the National Academy of Sciences (abstract). The GU Piscium b paper is Naud et al., “Discovery of a Wide Planetary-Mass Companion to the Young M3 Star GU Psc,” The Astrophysical Journal Vol. 787, No. 1 (2014). Abstract and preprint available.