A New Marker for Planet Formation

Given how many planet-hosting stars we’re finding, any markers that can tell us which are most likely to have terrestrial worlds would be welcome. New work out of Vanderbilt University is now providing us with an interesting possibility. Working with the university’s Keivan Stassun, graduate student Trey Mack has developed a model that studies the chemical composition of a given star and relates it to the amount of rocky material it has ingested during the course of its lifetime. Stars with a high amount of such material may be places where small, terrestrial worlds are rare.

What Mack has done is to look at the relative abundance of fifteen specific elements. According to this Vanderbilt news release, he was most interested in elements with high condensation temperatures like aluminum, silicon, calcium and iron, the kind of materials that become building blocks for planets like the Earth. In this context, it’s important to remember that stars are 98 percent hydrogen and helium, with all elements heavier than these being referred to as ‘metals.’

Bear in mind how stellar metallicity may be affected during planet formation, as discussed in the paper:

There are at least two planet formation processes that may alter stellar surface abundances: (1) the accretion of hydrogen-depleted rocky material (Gonzalez, 1997), which would result in the enrichment of the stellar atmosphere, and (2) H-depleted rocky material in terrestrial planets may be withheld from the star during their formation, which would result in the depletion of heavy elements relative to H in the stellar atmosphere (Melendez et al. 2009).

All of this can lead to scenarios involving planetary migration:

For the enrichment scenario, Schuler et al. (2011a) suggest that stars with close-in giant planets (∼0.05 AU) may be more enriched with elements of high condensation temperature (TC). This is thought to be a result of giant planets which form in the outer planetary system migrating inward to their present close-in positions. As they migrate, they can push rocky material into the host star (e.g., Ida & Lin 2008; Raymond et al. 2011). For the depletion scenario, Melendez et al. (2009) and Ramırez et al. (2009) propose that the depletion of refractory elements in Sun-like stars may correlate with the presence of terrestrial planets.

For the Vanderbilt work, the wide binary pair HD 20782/81 proved a useful study, chosen by Mack because both stars have planets and both evidently condensed out of the same cloud of dust and gas, thereby beginning their lives with the same chemical compositions. To my knowledge, this is the only known wide binary in which both stars host detected planets. The two stars are G-class dwarfs like the Sun, one being orbited by two Neptune-class planets, the other by a single Jupiter-size world in a highly eccentric orbit. The spectra of the stars indicates that both show an abundance of refractory materials significantly higher than the Sun.

The abundances of these metals is high enough, in fact, to indicate that each of the two stars would have had to consume an amount of rocky material equal to 10-20 Earth masses to produce the observed spectra. On that score it is significant that both stars host giant planets on eccentric orbits closing as tightly as 0.2 AU. Mack summarizes the finding:

“Imagine that the star originally formed rocky planets like Earth. Further, imagine that it also formed gas giant planets like Jupiter. The rocky planets form in the region close to the star where it is hot and the gas giants form in the outer part of the planetary system where it is cold. However, once the gas giants are fully formed, they begin to migrate inward and, as they do, their gravity begins to pull and tug on the inner rocky planets. With the right amount of pulling and tugging, a gas giant can easily force a rocky planet to plunge into the star. If enough rocky planets fall into the star, they will stamp it with a particular chemical signature that we can detect.” 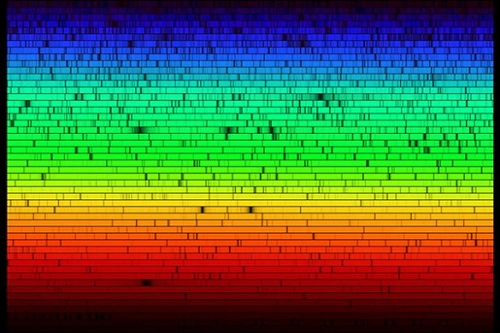 Image: What if we could determine if a given star is likely to host a planetary system like our own by breaking down its light into a single high-resolution spectrum and analyzing it? A spectrum taken of the Sun is shown above. The dark bands result from specific chemical elements in the star’s outer layer, like hydrogen or iron, absorbing specific frequencies of light. By carefully measuring the width of each dark band, astronomers can determine just how much hydrogen, iron, calcium and other elements are present in a distant star. The new model suggests that a G-class star with levels of refractory elements like aluminum, silicon and iron significantly higher than those in the Sun may not have any Earth-like planets because it has swallowed them. Credit: N.A.Sharp, NOAO/NSO/Kitt Peak FTS/AURA/NSF.

With this in mind, the possibility that either of the binary twins hosts terrestrial planets is sharply reduced. The star orbited by two Neptune-class planets seems to have ingested more rocky material than its twin, with Mack and Stassun speculating that the two planets proved to be more efficient orbital disruptors for any terrestrial worlds that may have once been there. Even so, the other star, orbited by a Jupiter-class world, evidently pushed a large amount of rocky material into its star as well. The chemical composition is telling us that G-class stars with such high metallicities probably lack the kind of inner rocky planets many astronomers are searching for.

If these signatures are born out by subsequent study, we may have found a way to quickly determine whether a given G-class star is likely to have terrestrial planets, simply by analyzing its chemical composition. Several previous studies have linked star metallicity with planet formation, with one concluding that gas giants are found around high-metallicity stars, while terrestrial planets can be found around stars with a wide range of metal content. This work extends the use of metals as a marker in interesting new directions, playing off the link between a G-class star’s chemical composition and the kind of solar system it is likely to produce.

Previous post: GU Piscium b: Tuning Up our Imaging