Exomoons: A New Technique for Detection

A friend asked me the other day whether my interest in exomoons — moons around exoplanets — wasn’t just a fascination with the technology of planet hunting. After all, we’ve finally gotten to the point where we can detect and confirm planets around other stars. An exomoon represents the next step at pushing our methods, and a detection would be an affirmation of just how far new technology and ingenious analysis can take us. So was there really any scientific value in finding exomoons, or was the hunt little more than an exercise in refining our tools?

I’ve written about technology for a long time, but the case for exomoons goes well beyond what my friend describes. We’ve found not just gas giants but ‘super-Earths’ in the habitable zones of other stars, and it’s a natural suggestion that around one or both classes of planet, an exomoon might he habitable even if the parent world were not. It’s a natural assumption that moons exist around other planets elsewhere as readily as they do around the planets of our own Solar System, and given the sheer number of planets out there, the prospect of adding potential sites for life — perhaps more common sites than habitable planets themselves — is irresistible.

Then in catching up with work after my recent trip, I noticed René Heller’s work on the exomoon question, as reported in Astrobiology Magazine. Heller (McMaster University, Ontario) is proposing a new method of detection that involves the particular eclipsing effect of moons during the kind of transit studies that Kepler has provided so much data on. What is striking here is that if Heller is right, we may be able to detect not just moons several times larger than Ganymede — this is where the current state of the art seems to be — but moons much smaller still, on the scale of the moons we find in our own Solar System.

Heller’s paper, recently published in The Astrophysical Journal, picks up on further scientific advantages in studying exomoons. Such objects can offer us insights into how exoplanets formed. Consider this (internal references omitted for brevity):

The satellite systems around Jupiter and Saturn, for example, show different architectures with Jupiter hosting four massive moons and Saturn hosting only one. Intriguingly, the total mass of these major satellites is about 10-4 times their planet’s mass, which can be explained by their common formation in the circumplanetary gas and debris disk…, and by Jupiter opening up a gap in the heliocentric disk during its own formation… The formation of Earth is inextricably linked with the formation of the Moon…, and Uranus’ natural satellites indicate a successive ‘collisional tilting scenario’, thereby explaining the planet’s unusual spin-orbit misalignment.

And so on. Between astrobiology and planet formation, I’d say there is plenty of reason to be interested in exomoons, though my friend is right that I still get jazzed by the ability of skilled researchers to develop the strategies we need for their detection. We’ve followed the fortunes of the Hunt for Exomoons with Kepler (HEK) for some time in these pages, and it’s fascinating to me that what Heller is proposing would also make use of the abundant Kepler data. .

Addendum: My mistake. A note from exomoon hunter David Kipping, who heads up the Hunt for Exomoons with Kepler, sets this straight. Let me quote it:

“This is not true, actually HEK uses dynamics and photometric effects in combination. We model both the moon transit effects (which Heller is talking about) plus the dynamical perturbations, such as transit timing and duration variations, simultaneously. The difference is that Heller stacks all of the transit data on top of itself and we do not. An important point to bear in mind is that this stacking process does not give you any more signal-to-noise than using the entire time series and fitting it globally, as HEK does. Since one does not actually gain any greater sensitivity by using the OSE method, one cannot finds moons smaller than the sensitivity limits we’ve achieved thus far in HEK and I can tell you that Galilean satellites are only detectable in very exceptional cases- generally Earth-like radius sensitivity is the norm.

“Let me say though, the OSE method is fast and computationally cheap but lacks the dynamics of our models, which ultimately allow for an exomoon confirmation. So I think this method could be useful tool for quickly scanning the Kepler data to identify interesting anomalies worthy of further analysis.”

What more can we tease out of an exoplanetary transit? Observation of a moon orbiting an exoplanet around its equatorial midline and passing in front of the planet, then behind it, should — over the course of time and numerous observations — build up a series of dots representing its position at any given moment in its orbit. With enough observations, the effect is of two ‘wings’ coming out of the sides of the planet, an effect that will appear lighter at the inner edges and darker at the outer edges. Astrobiology Magazine explains:

That’s because when the moon reaches the extent of its orbit and then starts circling back around the planet, its positions overlap more in a tighter space. As such, the “wingtips” look darker; that is, there is increased eclipsing of background starlight at the moon’s farthest apparent positions from the planet.

And of course to spot this effect requires constant observation of the star over a long period of time, allowing the moon to complete a large number of orbits “in order for its light-blocking effect to preferentially stack up at the wingtips.” And voila, what we have with the Kepler spacecraft is an observatory that gave us precisely this, observations of about 150,000 stars through its long stare of data gathering, some four years before equipment failure laid it low. Heller’s point is that we need wait for no future technology to hunt today for moons like those in our Solar System. 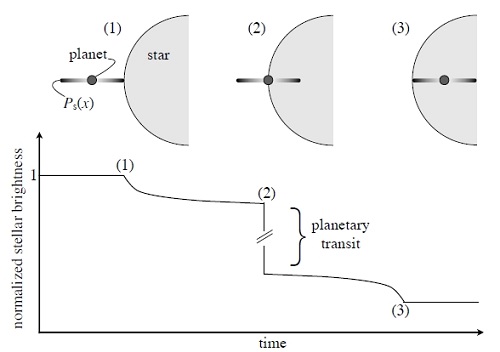 Image: This figure from Heller’s paper depicts the effects of a transiting exoplanet with exomoon averaged over time. We would expect a drop in starlight as the exoplanet moves in front of the host star, but Heller’s method focuses on the change to the lightcurve caused by the exomoon before and after it crosses the stellar disk, an effect which repeats on the other side. Credit: René Heller.

The ‘stacking up’ effect of these transit observations over time as the moon and planet transit the star in different configurations allows the detection. Because we need plentiful statistical data to make all this work, red dwarf stars are ideal candidates because habitable zone planets there have extremely short years and thus make many transits. According to Heller, moons down to Ganymede size should be detectable around M-dwarfs, while around warmer orange dwarf stars, exomoons about ten times Ganymede’s mass would be within range. G-class stars like the Sun are not represented well enough in the Kepler data because they lack sufficient transits.

The minute effects discernible in an exoplanet’s regular transit are what make the exomoon detection possible. Heller notes that the Orbital Sampling Effect (OSE) yields data indicative of the moons’ radii and planetary distances, while study of the planet’s transit timing variations (TTV) and transit duration variations (TDV), in conjunction with Orbital Sampling Effect, allow measurements of the moon’s mass. More complex transit signatures could, using this method, even allow the detection of multiple exomoon candidates.

The paper is Heller, “Detecting extrasolar moons akin to solar system satellites with an orbital sampling effect,” The Astrophysical Journal, Vol. 787, No. 1 (2014), abstract and preprint available. Thanks to Dave Moore for the pointer to this work.