Sunset at Titan: The Problem of Haze

Given the high quality imagery returned by Cassini on an almost routine basis, it’s interesting to remember how little we knew about Saturn’s moon Titan back in November of 1980, when Voyager 1 made its closest approach to the planet. Think of the options the Voyager 1 team had in front of it. The craft could have been sent on to Uranus and Neptune, a trek Voyager 2 would later accomplish. It could have preempted New Horizons if, on a different trajectory, it had been sent to Pluto. But Titan had the allure of a thick atmosphere, making it an irresistible target. 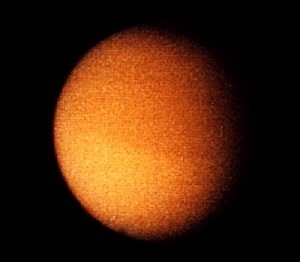 Deflecting Voyager 1 past Titan meant taking it out of the plane of the ecliptic, canceling the other two options, and the frustration of the Titan images the spacecraft returned is summed up in the view we see at the right, a moon whose surface is completely obscured. The visually impenetrable atmosphere was also found to be topped by a thick layer of haze. Learning about that atmosphere was hugely important for planetary science — the spacecraft detected methane, ethane, nitrogen and numerous organic compounds — but I can recall the sense of letdown in the general public upon seeing a featureless orange ball instead of a detailed surface like those of other gas giant moons Voyager 1 had seen.

Image: Titan as seen by Voyager 1’s cameras, which could not penetrate the deep haze of organic aerosols. Credit: NASA.

Titan’s murk would eventually be penetrated by Cassini’s instruments and, of course, the Huygens lander that descended into the atmosphere for its long parachute drop to the surface. But the haze continues to be a major part of Titan’s story, and as this JPL news release points out, its effects can be useful even in terms of how we learn about exoplanets. For Cassini is in position to witness Titan’s sunsets, solar occultations that mimic what we observe when collecting spectra of an exoplanet’s atmosphere as its star’s light passes through it.

The technique is called transmission spectroscopy. As the star’s light passes through the atmosphere of an exoplanet in transit, some of that light is absorbed by the atmosphere, giving us a spectrum that can tell us about the atoms, molecules and grains found there. Knowing that clouds and high-altitude hazes like those on Titan are not uncommon in our own system, we can assume that many exoplanets will have them as well. That means that understanding their effects is key to describing the limits of this transit technique.

A team led by Tyler Robinson (NASA Ames) used four Cassini observations of Titan made between 2006 and 2011 using the spacecraft’s visual and infrared mapping spectrometer instrument (VIMS). The work, described in Proceedings of the National Academy of Sciences, then compared the complex effect of hazes to exoplanet models and observations. The result: Hazes like those on Titan provide a severe check on what we can learn from transmission spectroscopy, and may give us information only about the planet’s upper atmosphere. That’s a level that on Titan would be 150 to 300 kilometers above the surface. 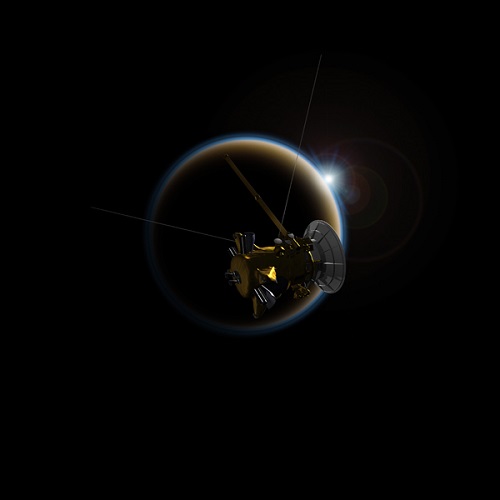 Image: Using data collected by Cassini’s Visual and Infrared Mapping Spectrometer, or VIMS, while observing Titan’s sunsets, researchers created simulated spectra of Titan as if it were a planet transiting across the face of a distant star. The research helps scientists to better understand observations of exoplanets with hazy atmospheres. Credit: NASA/JPL.

We also learn that Titan’s hazes affect shorter, bluer wavelengths of light more strongly than other colors, a result not anticipated by previous studies of exoplanet spectra, which assumed that hazes affected all colors of light in more or less the same way.

“People had dreamed up rules for how planets would behave when seen in transit, but Titan didn’t get the memo,” said Mark Marley, a co-author of the study at NASA Ames. “It looks nothing like some of the previous suggestions, and it’s because of the haze.”

Using Titan as a close-up stand-in for a distant exoplanet helps us see how much an effect haze can have. In Titan’s case, we would be looking at layers far above the densest and most complex layers of its atmosphere. All of these complicated effects have to be worked out as we extract the signature of an exoplanet’s atmosphere, a challenge that is clearly formidable. The good news is that techniques like these can be applied to the atmospheres of planets in our own Solar System just as they were at Titan to help us develop more accurate, workable models.

Next post: Human Universals and Cultural Evolution on Interstellar Voyages