In our email conversations leading up to my publishing Human Universals and Cultural Evolution on Interstellar Voyages, Cameron Smith confirmed that there were few anthropologists engaged in studying long-term spaceflight. The same can be said for historians and sociologists, although we do have some prominent names devoting themselves to changing that. Kathleen Toerpe is doing splendid work with the Astrosociology Research Institute (I’m hoping for a new report from her soon in these pages), while Interstellar Migration and the Human Experience (1985) made a determinedly multidisciplinary effort to study our place in the cosmos.

The latter book was actually the proceedings of the Conference on Interstellar Migration held in Los Alamos in 1983, and it remains a storehouse of insights into spaceflight’s effect on humanity. Presenters at the 100 Year Starship symposia have thus far been multidisciplinary as well, with representation from biologists, philosophers, writers and psychologists as well as scientists working the ‘hard science’ fields of propulsion and aerospace engineering. Of course, the place where starflight is most vividly presented from all angles of human experience is in science fiction, which over the years has explored many of the issues raised by, for example, putting a human crew into a multi-generational starship and shooting for Alpha Centauri.

Reading Cameron Smith’s essay, though, had me thinking all weekend about some of the fictional situations great writers have gotten their interstellar crews into. A trip that takes a thousand years inspires thoughts of generations that eventually forget their mission and may not realize they are on a starship. This is familiar turf, worked by Brian Aldiss in his novel Non-Stop (1958), and of course famously portrayed by Robert Heinlein in Orphans of the Sky, which grew out of two novellas in Astounding Science Fiction. Ever the bibliographer, I must mention both: “Universe,” in ASF May, 1941, and the sequel “Common Sense,” which ran in October of the same year. 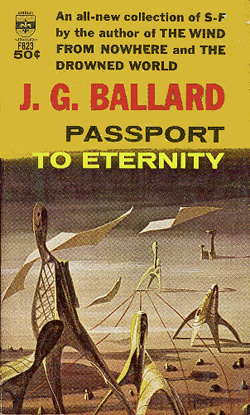 But if crews that forget where they are is a classic trope of science fiction, somewhat less so is the different kind of ignorance portrayed by J. G. Ballard’s crew in “Thirteen to Centaurus,” a story mentioned by Centauri Dreams commenter Alex Tolley over the weekend. Here the issue is how human crews react to long-haul spaceflight, and we learn early on in the story that the narrative being told by the authoritative ship’s doctor is not exactly what it seems. Here he’s speaking with a young man who has come to believe that his ‘world’ may be a ship:

“You’d more or less guessed before I told you. Unconsciously, you’ve known all about it for several years. A few minutes from now I’m going to remove some of the conditioning blocks, and when you wake up in a couple of hours you’ll understand everything. You’ll know then that in fact the Station is a spaceship, flying from our home planet, Earth, where our grandfathers were born, to another planet millions of miles away, in a distant orbiting system. Our grandfathers always lived on Earth, and we are the first people ever to undertake such a journey. You can be proud that you’re here. Your grandfather, who volunteered to come, was a great man, and we’ve got to do everything to make sure that the Station keeps running.”

Abel nodded quickly. “When do we get there — the planet we’re flying to?”

Dr. Francis looked down at his hands, his face growing somber. “We’ll never get there, Abel. The journey takes too long. This is a multi-generation space vehicle, only our children will land and they’ll be old by the time they do. But don’t worry, you’ll go on thinking of the Station as your only home, and that’s deliberate, so that you and your children will be happy here.”

This all seems familiar for a time, but of course this is J. G. Ballard, in whose hands the tools of science fiction take evocative new form. Normally I would worry about spoiler alerts, but this is a short piece and the reader learns early on that things are not what they seem, so I feel comfortable saying that Dr. Francis is himself lying, that the ship is a long-term Earthbound experiment, and that its crew is being used to study the problems humans will have when we really do send ships to another star. The boy Abel is smart enough to start seeing through even this subterfuge, and our friend Dr. Francis learns he has an agonizing decision to make. 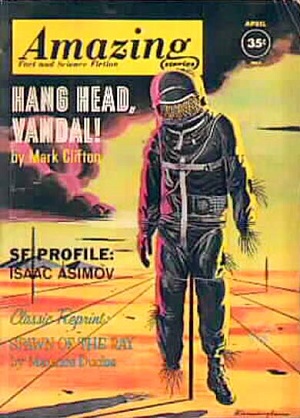 Published in the April, 1962 issue of Amazing Stories — then under the leadership of Cele Goldsmith, whom I consider one of science fiction’s great editors — “Thirteen to Centaurus” was also dramatized by the BBC in 1965 as part of its ‘Out of the Unknown’ series. If you’re not a collector of old magazines, you can track it down in 1963’s collection Passport to Eternity, or more easily still in 2010’s The Complete Stories of J. G. Ballard.

It would be interesting to know how much of an influence the Ballard tale played on Bruce Sterling, whose story “Taklamakan” won a 1999 Hugo Award. Here simulation again comes into play, this time in a remote cave under the Taklamakan desert. There, within three enormous structures each the size of a high-rise building, what one of the characters calls ‘a dry-run starship experiment’ is ongoing, an entire, isolated community having been chosen for the task, which has aspects of both ethnic cleansing and scientific study. The characters ‘Spider Pete’ and Katrinko talk over the ramifications:

“You suppose these guys really believe they’re inside a real starship?”

“I guess that depends on how much they learned from the guys who broke out of here with the picks and the ropes.”

Katrinko thought about it. “You know what’s truly pathetic? The shabby illusion of all this. Some spook mandarin’s crazy notion that ethnic separatists could be squeezed down tight, and spat out like watermelon seeds into interstellar space. . . . Man, what a come-on, what an enticement, what an empty promise!”

“I could sell that idea,” Pete said thoughtfully. “You know how far away the stars really are, kid? About four hundred years away, that’s how far. You seriously want to get human beings to travel to another star, you gotta put human beings inside of a sealed can for four hundred solid years. But what are people supposed to do in there, all that time? The only thing they can do is quietly run a farm. Because that’s what a starship is. It’s a desert oasis.”

And maybe you’ll remember one last story that traded off isolation and experimentation on human crews. The very first episode of Rod Serling’s series The Twilight Zone was “Where Is Everybody?” First broadcast in October of 1959, the story, written by Serling, stars Earl Holliman as a man who finds himself in a town where no one seems to exist, even though evidence of recent occupation is everywhere. We learn at the end that the character Holliman plays, Mike Ferris, is an astronaut in training. He’s been inside an isolation room for almost 500 hours during a simulated trip to the moon. Can the human mind handle deep space in tiny spacecraft?

The message of the show is ‘yes,’ as Ferris looks out and sees the Moon when he is being taken on a stretcher to the hospital. His hallucinations haven’t altered his determination. He yells into the sky:

“Hey! Don’t go away up there! Next time it won’t be a dream or a nightmare. Next time it’ll be for real. So don’t go away. We’ll be up there in a little while.”