Building public interest in deep space is a long-term goal for most of us in the interstellar community, and the release of the film Interstellar this fall may set off a new round of discussion among reviewers and movie fans alike. Also helpful is the DVD release of the Neil deGrasse Tyson Cosmos series, given Tyson’s performance and the stunning visuals that communicate the majesty and power of the universe around us.

But I think it’s encouraging that while these blockbuster media releases work their magic, what used to be staid scientific conferences frequented only by specialists are turning into media events of their own. The American Astronomical Society is currently meeting in Boston, with exoplanet papers that I’m already seeing discussed well outside the usual venues. The more we see the excitement and sheer scope of the exoplanet hunt communicated to the public, the more likely we’re building the kind of interest among young people that may one day turn into scientific careers and — dare I say it — funding for missions that will fly beyond our system’s edge.

Maybe Dimitar Sasselov (Harvard-Smithsonian Center for Astrophysics) had a bit of media buzz in mind when he described a rocky world known as Kepler-10c as “the Godzilla of Earths.” The finding is exciting enough that he can, in any case, be forgiven the hyperbole. Kepler-10c is located about 560 light years from us in the constellation Draco, orbiting its host star every 45 days. A second world in this system, the star-hugging Kepler-10b, was the first rocky planet detected by Kepler and confirmed by radial velocity follow-ups from Earth. With a diameter of about 29,000 kilometers, Kepler-10c looked to be another ‘mini-Neptune,’ a world with a thick atmosphere covering a much smaller rocky core.

The surprise came when a research team led by Sasselov’s colleague Xavier Dumusque at the CfA went to work with the HARPS-North instrument on the Telescopio Nazionale Galileo (Canary Islands) to measure the mass of the planet. The result: Kepler-10c weighs fully 17 times as much as the Earth, demonstrating it is made of rocks and other solids. A rocky planet on this scale is beyond the designation ‘super-Earth.’ This CfA news release calls it a ‘mega-Earth,’ a world that we would have expected to have become the core of a Neptune- or Jupiter-class gas giant. 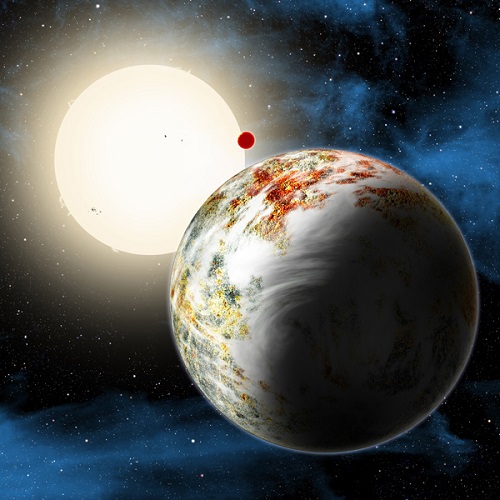 Image: The newly discovered “mega-Earth” Kepler-10c dominates the foreground in this artist’s conception. Its sibling, the lava world Kepler-10b, is in the background. Both orbit a sunlike star. Kepler-10c has a diameter of about 18,000 miles, 2.3 times as large as Earth, and weighs 17 times as much. Therefore it is all solids, although it may possess a thin atmosphere shown here as wispy clouds. Credit: David A. Aguilar (CfA).

The paper on this work notes that “Kepler-10c might be the ﬁrst ﬁrm example of a population of solid planets with masses above 10 M⊕.” And it goes on to discuss the work of Lars A. Buchhave, a CfA astronomer who likewise presented at the AAS meeting in Boston, whose work supports the idea that orbital period correlates with the size at which a planet makes the transition from rocky to gaseous:

If this model is correct, it implies that the core mass limit for gas accretion should increase with orbital period. A recent study from Buchhave et al. (2014, in press.), analyzing hundreds of Kepler candidates, seems to agree with this theoretical prediction. With a period of 45.29 days, a radius of 2.35 R⊕, and a density higher than Earth, Kepler-10c would be at the limit of the transition from terrestrial to gaseous planets observed by Buchhave et al. (2014, in press.). Kepler-10c might be the ﬁrst object conﬁrming that longer period terrestrial planets can be more massive than ones with shorter periods.

The implication is that Kepler-10c is not likely to be the last ‘mega-Earth’ we find. And this is interesting:

We note that Kepler-131b (Porb = 16 days, 16.1 ± 3.5 M⊕, 2.4 ± 0.2 R⊕, Marcy et al. 2014) lies in the same location of the mass-radius diagram as Kepler-10c. However the mass determination of Kepler-131b is not as robust as for Kepler-10c and more data are needed to conﬁrm the high density of this planet. Measuring precisely the mass of several other long-period Kepler candidates orbiting bright stars could test this speculation. This experiment has just been started as a new observational program on HARPS-N.

Observational errors dominated by photon noise are a problem with a star as faint as Kepler-10, and the paper adds that future transit searches focusing on bright stars will allow the high-quality radial velocity findings needed to measure planetary masses to greater precision. The TESS (Transiting Exoplanet Survey Satellite) mission should provide numerous candidates, as should the ESA’s PLATO mission (PLAnetary Transits and Oscillations of stars).

Meanwhile, we may be learning something new about the early universe, for the Kepler-10 system is some 11 billion years old. Huge, rocky planets could evidently form despite the fact that heavy elements were scarce in this era. Says Sasselov: “Finding Kepler-10c tells us that rocky planets could form much earlier than we thought. And if you can make rocks, you can make life.” Even stars as old as this one, then, shouldn’t be ruled out when we look for astrobiology candidates, a finding that expands the parameters of our search for life elsewhere in the universe.

The paper is Dumusque et al., “The Kepler-10 planetary system revisited by HARPS-N: A hot rocky world and a solid Neptune-mass planet,” accepted for publication in The Astrophysical Journal (preprint).