The red dwarf known as Kapteyn’s Star — the name comes from the 19th Century Dutch astronomer Jacobus Kapteyn — is about thirteen light years from Earth in the southern constellation of Pictor, close enough that a small telescope can pick it out. Kapteyn’s efforts at cataloguing the star in 1898 revealed that it had the highest proper motion of any star then known, a position it lost with the discovery of Barnard’s Star in 1916. Because I find stellar encounters interesting, I’ll note that about 11,000 years ago, Kapteyn’s Star would have come within seven light years of the Sun. It has been moving away from us ever since.

Kapteyn’s Star belongs to the galactic halo, a dispersed population of stars on elliptical orbits that wraps around the galactic disk and bulge. It is the nearest known halo star to the Sun. We now know, through the efforts of an international research team, that at least two planets are found here. Kapteyn c is a ‘super-Earth’ with an orbit of 121 days, while Kapteyn b comes in at about five Earth masses and orbits the star every 48 days, potentially making it warm enough for liquid water to exist on the surface. Bear in mind that this is the 25th nearest star to the Sun, a star with a history that evidently includes birth in an original dwarf galaxy now known as Omega Centauri, which was long ago absorbed and disrupted by its encounter with the Milky Way. 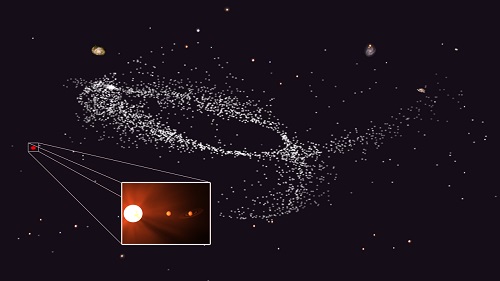 The paper explains this intriguing background and estimates the star’s age:

The age of Kapteyn’s star can be inferred from its membership to the Galactic halo and peculiar element abundances (Kotoneva et al. 2005). The current hierarchical Milky Way formation scenario suggests that streams of halo stars were originated as tidal debris from satellite dwarf galaxies being engulfed by the early Milky Way (Klement 2010, and references therein). This scenario is supported by the age estimations of the stars in the inner halo (~10-12 Gyr, Jofré & Weiss 2011), and globular clusters. The work by Eggen and collaborators… established the existence of such high-velocity, metal-poor moving groups in the solar neighborhood. Kapteyn’s star is the prototype member of one of these groups…

So we’re dealing with an ancient star with an age not likely to be less than 10 billion years, and perhaps much older (the obvious upper cut-off being 13.7 billion years). The paper speculates that detecting two super-Earths around Kapteyn’s Star is consistent with the idea that low-metallicity stars tend to produce low-mass planets rather than gas giants, an idea supported by the small number of low mass planets found in radial velocity searches of metal-rich stars.

It’s also interesting to consider, as the paper does, that at the likely age of the Kapteyn’s Star system, most G and K dwarfs would be evolving away from the main sequence into giants, which would make detecting planets around them through Doppler methods all but impossible because of the high level of solar activity. The result: If we want to learn about the oldest planetary systems in the galaxy, we’ll need to turn to low-mass stars like this one, which remain on the main sequence and will stay there for a long time to come.

If you’re a science fiction fan, you’ll want to check out this news release from the University of London, which interweaves within the text a short story by Alastair Reynolds called ‘Sad Kapteyn.’ The tale describes in just a few paragraphs the arrival of a robotic interstellar probe at the Kapteyn’s Star planetary system. Reynolds is always worth reading (the Revelation Space novels in particular), and I quote him here as he recounts the AI probe’s discovery of a long-dead civilization on Kapteyn b:

“Continent-sized craters mar Kapteyn b, and I wonder if they speak of some truly awesome catastrophe – a cosmic accident, or something worse? Whatever the case, the builders of these cities are long gone. Perhaps they were dead even before Kapteyn’s star was snatched from the clutches of its mother galaxy.

“At the risk of inferring too much from too little data, I can’t help indulging in a little speculation. I too was the product of a technological civilisation, with the capability to transform a planet, to colonise other moons and worlds, to build daunting structures. The people of Kapteyn b were clearly more advanced than you, my own builders – but given time, you too could have transformed a world in this manner.

“Something to think about, isn’t it?”

The paper is Anglada-Escudé et al., “Two planets around Kapteyn’s star: a cold and a temperate super-Earth orbiting the nearest halo red-dwarf,” accepted at Monthly Notices of the Royal Astronomical Society (preprint).