Although I’m sure I’ll refer to various papers presented at the American Astronomical Society this week in future entries, I’ll close our current look at the Boston meeting with word of two planets that will be falling into their star in short order (at least as astronomers measure time). Kepler-56b and Kepler-56c have a predicted era of death, some 130 million and 155 million years from now respectively. I can’t think of any other exoplanets about which we’ve been able to make such statements, making this a system worth watching as we ponder our own Sun’s future.

Just as the Sun will one day enlarge to red giant status, threatening the inner planets, so Kepler-56 is growing, already reaching four times the size of the Sun. The star has a long way to go as it continues its outward expansion, and the two planets in question are in a perilous position, with Kepler-56b orbiting the host star every 10.5 days, and Kepler-56c every 21.4. Gongjie Li (Harvard-Smithsonian Center for Astrophysics) and team have worked the number’s on the star’s evolution, leading to this prediction about the inner worlds’ demise.

You may recall this system as the first multi-planet system to be found with a tilt, as the orbits of the two inner planets are tipped from the star’s equator. Li told her session at the AAS conference that while the inner planets will be gradually destroyed by the star, heated enough to boil off any atmospheres and stretched by stellar tides along the way, a third known planet in this system, Kepler-56d, will be far enough out to survive. The latter is a gas giant in a 3.3 year orbit, and the researchers now believe that its orbit is tilted relative to the star as well. Such systems demand explanation since we would expect that planets formed from the same gas and dust disk as their host star would orbit in the plane of the star’s equator, as we see in our own system. 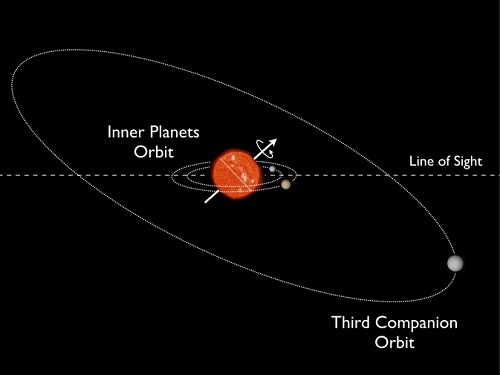 Image: Graphical sketch of the Kepler-56 system. The line of sight from Earth is illustrated by the dashed line, and dotted lines show the orbits of three detected companions in the system. The solid arrow marks the rotation axis of the host star, and the thin solid line marks the host star equator. Credit: NASA GSFC/Ames/D Huber.

Li pointed out in Boston that finding the inclination of the outer companion was important in helping us learn about the processes that produced the planetary misalignments. Last October I wrote about Daniel Huber’s work at NASA Ames involving the misalignment of the Kepler-56 inner planets with the host star. We do know of systems where ‘hot Jupiters’ are found that are not aligned with the equatorial plane of their hosts. Is this the result of planetary migration and chaotic close encounters with other planets in the system? If that is the case, then multi-planet systems without hot Jupiters should not show misalignment with the host star.

But we have no hot Jupiters around Kepler-56. Huber’s team used radial velocity measurements from the HIRES instrument at the Keck 10-meter telescope to study the system, seeing the signature of a third planet in a wide orbit (Kepler-56d) that was likewise misaligned from the equatorial plane of the star. It’s that outer planet that could in Huber’s view, have torqued the orbits of the inner planets out of the star’s equatorial plane. From the paper:

The inner planetary orbits would stay aligned with one another because of strong coupling between their orbits, resulting in a misalignment of the two co-planar transiting planets with the host star. Dynamical simulations that include a third companion in an eccentric orbit inclined to the equatorial plane of the host star conﬁrm that such a mechanism can reproduce the architecture of the Kepler-56 system.

At 3000 light years from the Earth, Kepler-56 turns out to be a fascinating system. Huber found the rotation axis of the star tilted about 45 degrees to our line of sight at the same time that we were seeing the two transiting inner planets (Kepler-56d was detected solely by radial velocity methods). Both Li’s and Huber’s earlier work point to misalignment like this not being caused by hot Jupiters, and leave open for study how Kepler-56’s tilting mechanism could be at play around other stars. The important work ahead is to further constrain the inclination of the outer planet, Kepler-56d.