I didn’t have the chance to meet Mark Lupisella at the first 100 Year Starship symposium in Orlando, but the publication of Cosmos & Culture: Cultural Evolution in a Cosmic Context in 2013 made me wish I had sought him out. Co-edited with Steven J. Dick (about whom there are so many interesting things to say that I’ll have to carry over into a future post with them), Cosmos & Culture offers essays from scientists, historians and anthropologists about the evolution of culture both on Earth and, most likely, beyond it.

These are, of course, issues we’ve been considering recently in the work of Cameron Smith and Kathleen Toerpe, and in a broader sense they inform many of the SETI and astrobiology discussions we have here. Then Clément Vidal, who is an author and a post-doctoral researcher at the Free University of Brussels, passed along the paper I missed in Orlando, Lupisella’s “Cosmocultural Evolution: Cosmic Motivations for Interstellar Travel.” To be fair to myself, we all missed plenty of papers at the first 100YSS, because there were five simultaneous tracks and it was impossible (at the current state of technology) to be in more than one place at a time. 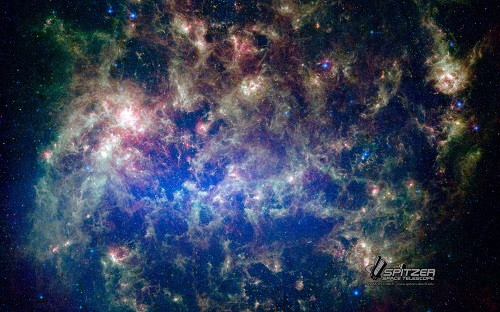 Image: A Spitzer infrared view of the Large Magellanic Cloud, a satellite galaxy to the Milky Way. How we define the human role in a cosmos of such immensity has ramifications throughout our culture. Credit: Spitzer Space Telescope/JPL.

I want to draw on Lupisella’s work this morning because it intersects with an issue I often deal with: How do we state a rationale for expansion into the cosmos? Lupisella discusses a very interesting ‘cosmocultural evolution’ that I’ll get to in a moment, but let’s focus on the motivations for going off-planet that inform any discussion about space. I take it for granted, for instance, that one key driver for a long-term human presence in space is simple survival, the universe being a dangerous place, and our Solar System littered with evidence in the form of space debris and cratered terrain of what can happen when one astronomical body runs into another.

Not everyone agrees with this motivation. I’ve written before about one dinner party where, in the midst of a discussion about everything but the future, one of the guests suddenly asked me why I spent so much time writing about space. It soon became clear that the consensus at the dinner table held that money spent on space was wasted by being diverted from pressing needs on Earth. After I had explained my view that our species needed to insure itself against future catastrophe, my first interrogator said, “Why? I would think that if we found a huge object headed for our planet, we would be doing the universe a favor by letting it hit us and getting it over with.”

So you can’t count on survival as a trump card. And by the way, trying to get past the attitude just cited is probably impossible, because anyone that misanthropic isn’t going to give ground even when reminded that if he did let an incoming asteroid hit the Earth, he would be signing not just his own death warrant but those of his grandchildren and everyone else’s grandchildren as well.

Lupisella sees interstellar flight as “the ultimate insurance policy,” but he brings to the question an added ethical dimension. We should consider our survival as necessary, in this view, because of the possibility that we may ultimately play a role in the broader evolution of the universe. So maybe we want to thrive and prosper not just for ourselves but for the sake of the meaning we can bring to life’s experience in the cosmos.

I find this a heartening view, but let’s add to it some other factors Lupisella pointed to in Orlando. A human presence in space sets up the conditions for countless new experiments in culture and philosophy, which means experiments in everything from social organization to means of governance, all of which would be interesting in and of themselves as well as providing data that could be of use for those remaining on the home world. The cultural experimentation this implies could also be complemented by new contexts for biological evolution — Freeman Dyson has written often about what could happen to our species as we begin to live in radically different environments and essentially begin to fork into various branches of homo sapiens, while the aforementioned Steven J. Dick has explored the emergence of post-biological intelligence.

Cultural diversity flows naturally out of all this, surely healthy for the species, but so does what Lupisella calls a ‘cosmic promotion,’ the reverse of the great demotions we have undergone throughout history as we adjusted our views of the cosmos. We’ve accustomed ourselves to being dethroned from the center of the universe, from being the place around which the Sun revolves, from being at the center of the galaxy, from being in the galaxy as we learned how many of them there are, and so on. Lupisella’s view of cosmocultural evolution suggests that although life, intelligence and culture could arise by chance, they still might have cosmic significance, or as he says, “Modest origins do not imply modest potential.”

Here’s the argument in a nutshell:

Does this remind you of anyone? For me, this is strikingly similar to Michael Michaud’s calls to bring meaning to the cosmos. In one of our dialogues in these pages (see Spaceflight and Legends: A Dialogue with Michael Michaud), the author and diplomat said this:

The moral obligation to assure the survival of intelligence is not imposed on us by gods or prophets, but by our own choices. Call that anthropocentrism if you will. I prefer to think of us as independent moral agents, perhaps the only ones in the galaxy. Until and unless we discover another technological civilization, we have a unique responsibility to impose intention on chance.

I love that phrase ‘to impose intention on chance’ and have used it in several talks. You may have run into Carl Sagan using language a bit like this. When pressed on what happens to humanity in a universe that can seem without meaning, Sagan would reply “Do something meaningful.” I take this to mean, whatever your views, whatever your angle on life, shape events toward a meaningful outcome. Don’t, in other words, let that asteroid hit the Earth. And no matter how bewildered you may be about your place in the cosmos, go forward and do your best.

I draw strength from Lao Tzu: “You accomplish the great task by a series of small acts.” The things we do every day to give meaning to our lives matter. Make them count.

Lupisella notes that in 2007, a panel of experts meeting at the Future of Space Exploration Symposium at Boston University recommended that a 50-year global vision be developed to guide future human space efforts. I am all for such long-term thinking and believe it dovetails nicely with our growing understanding of the meaning we can bring into being as we work. How energizing it is to see the cultural issues of future spaceflight in active discussion. Clément Vidal, by the way, has a book of his own coming out. I look forward to seeing The Beginning and the End: The Meaning of Life in a Cosmological Perspective, just published by Springer.