What to Look for at Charon

Let me suggest that you mark August 25th on your calendar. It’s the day we celebrate the 25th anniversary of Voyager 2’s closest approach to Neptune in 1989. That would be reason enough to look back and remember — marveling all the while at the Voyagers’ continuing mission — but it’s also the day when New Horizons will cross the orbit of Neptune. At work, as principal investigator Alan Stern points out in his latest PI’s Perspective, is ‘cosmic coincidence not design,’ but what a moment it will be as New Horizons moves at last into ‘Pluto space.’

90 percent of the long journey is over, with a bit more than 300 million miles to go before the encounter with Pluto/Charon next summer. Newly awakened from hibernation, the spacecraft will be put through a complete checkout of its onboard systems and scientific instruments, as well as conducting its first optical navigation campaign to study the approach into Pluto. Stern also reports that the upcoming cruise science will include imaging Pluto and its moons to study their light curves, seen by the spacecraft at a different angle than can be observed from Earth.

One more period of hibernation will occur before New Horizons is awakened in December, at which point the beginning of the encounter phase will be closing in. Recent work out of NASA GSFC, and an accompanying paper in Icarus, thus comes against the backdrop of a mission that will soon be answering many of our questions about this distant system. Alyssa Rhoden and team have developed a model that points to how we can study the possibility that Charon once had an underground ocean. Says Rhoden:

“Our model predicts different fracture patterns on the surface of Charon depending on the thickness of its surface ice, the structure of the moon’s interior and how easily it deforms, and how its orbit evolved. By comparing the actual New Horizons observations of Charon to the various predictions, we can see what fits best and discover if Charon could have had a subsurface ocean in its past, driven by high eccentricity.” 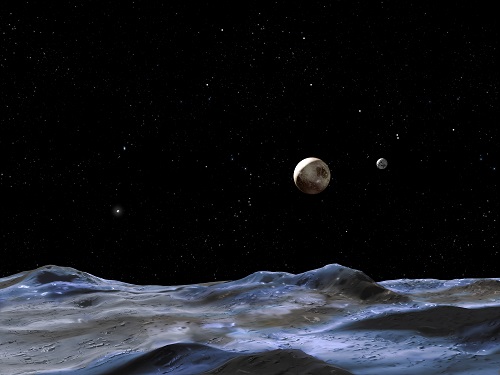 Image: This artist concept shows Pluto and some of its moons, as viewed from the surface of one of the moons. Pluto is the large disk at center. Charon is the smaller disk to the right. Credit: NASA, ESA and G. Bacon (STScI).

Both Europa and Enceladus show evidence for interior oceans, each experiencing tides that cause the interior to flex and heat enough to keep water under the ice in liquid form. What happened in the Pluto/Charon system depends upon its history. Charon could have had a highly eccentric orbit in the past that generated large enough tides to produce surface fractures. As tidally induced friction occurred in the interior of both Pluto and Charon, Pluto’s rotation would have slowed while Charon’s speeded up as the moon moved further away. Rhoden continues:

“Depending on exactly how Charon’s orbit evolved, particularly if it went through a high-eccentricity phase, there may have been enough heat from tidal deformation to maintain liquid water beneath the surface of Charon for some time. Using plausible interior structure models that include an ocean, we found it wouldn’t have taken much eccentricity (less than 0.01) to generate surface fractures like we are seeing on Europa. Since it’s so easy to get fractures, if we get to Charon and there are none, it puts a very strong constraint on how high the eccentricity could have been and how warm the interior ever could have been.”

So we have one more thing to look for as we approach Pluto/Charon next year. Bear in mind that Charon is unusually massive when compared to the body it orbits, about one-eighth of Pluto’s mass. Scientists believe the moon formed much closer to Pluto as the result of an impact that ejected material from Pluto to form the system of moons. Charon’s orbit is now circular, with a rotation rate that keeps Pluto and Charon showing the same side to each other at all times. Without significant tides in its present orbit, the odds are that any underground ocean inside Charon is long frozen.

The paper is Rhoden et al., “The interior and orbital evolution of Charon as preserved in its geologic record,” Icarus, published online 30 April 2014 (abstract). This NASA news release has more.