My guess is that the public thinks of the Hubble Space Telescope largely in relation to deep space objects. The Hubble Ultra Deep Field is a case in point, a region of the sky in the constellation Fornax that is no more than a tenth of the width of a full moon, but one that contains 10,000 galaxies. An image of the HUDF augmented by near-ultraviolet data has had considerable play in the media, showing star birth in galaxies five to ten billion years ago. It’s too lovely not to show here. 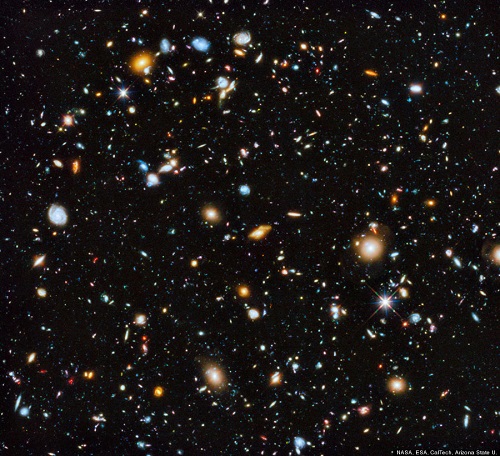 Image: The Hubble Ultra Deep Field with near-ultraviolet data, a false-color image that is the result of data acquisition from 841 orbits between 2003 and 2012. Credit: NASA/ESA/Caltech/Arizona State.

The HUDF attests to Hubble’s range, but we also know from Hubble’s studies of objects in our own Solar System that it can support ongoing planetary missions. Astronomers will now use the space observatory to help find tiny objects against the background of an immense starfield in Sagittarius. After consideration of the mission and the value of the data it will return, the Hubble Space Telescope Time Allocation Committee has recommended that the instrument be used to search for a Kuiper Belt Object that New Horizons can visit after its flyby of Pluto/Charon in 2015, a search contingent upon results of a pilot observation program using Hubble data.

We have two Voyagers still sending data as they push into interstellar space, but only New Horizons has a fully functioning set of instruments and the capability of making the necessary course alterations to perform a KBO flyby. The problem has been to identify the target, a hunt that could begin no earlier than 2011 because KBO candidates needed to be converging on the region of space that New Horizons can reach after the Pluto/Charon encounter. The 8.2-meter Subaru Telescope in Hawaii and the 6.5-meter Magellan Telescopes in Chile have so far been deployed on the task but it looks like it will take Hubble to make the call.

For of the roughly fifty new KBOs that the Subaru and Magellan instruments have thus far identified, none is within range of the spacecraft’s ability to maneuver. This is an extremely difficult search field, one that looks into the plane of the galaxy toward Sagittarius, and astronomers are searching for something that is both small and likely to be as dark as charcoal. But finding a target is important — the Kuiper Belt consists of debris from the Solar System’s formation, and we’ve never had the opportunity to get a close-up look at one of these objects. 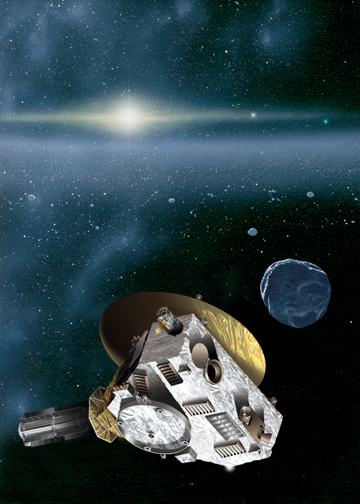 If Subaru and Magellan haven’t been able to find the right KBO, Hubble will try something different, turning at the rate that KBOs are predicted to move against the background stars. As this Space Telescope Science Institute news release explains, the result will be that KBOs will show up as pinpoint objects amidst a swarm of streaky background stars. Assuming the initial test observations — 40 orbits of Hubble observing time — show that the telescope can find at least two KBOs of the specified brightness, additional observing time covering a period of 156 orbits will be allotted to search a field of view the angular size of the full Moon.

Let’s wish Hubble success because New Horizons is the successor to the Voyagers, like them involved in a journey that should captivate and inspire our culture. The more science we can get out of it, the better, even though putting a payload past Pluto/Charon is itself a grand accomplishment. As for Hubble, its efforts on behalf of New Horizons point to its previous discovery of four small moons in the Pluto/Charon system as well as its search for dust rings that might have compromised the mission. Just as Hubble has proven its worth again and again in terms of planetary science (and don’t forget its contributions to the Dawn mission), we can hope for equally impressive accomplishments from the coming James Webb Space Telescope.