I’ll wrap up this week’s outer planet coverage with a look at recent Cassini flybys of Titan, but I also want to put these accomplishments in the context of what we might do with future missions to the ice giants Uranus and Neptune like the proposed ODINUS missions we looked at yesterday. One-off missions to explore a planet and its satellites collect highly detailed data, but comparative studies of the giant planets require accumulating datasets separated by decades. Are there alternatives?

Let’s hold that thought as we look at Cassini in this light. The flyby designated T-101 occurred on May 17 and was highlighted by Cassini beaming radio signals over Ligeia Mare and Kraken Mare, the two largest seas on Titan. The idea here is to bounce the signals off the surface of the lakes so that they are received by the ground stations of the Deep Space Network here on Earth. 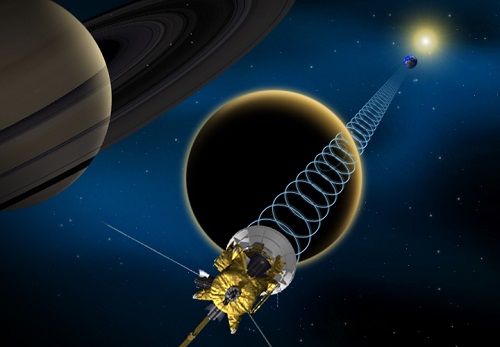 Called a bistatic scattering experiment, the radio signals encode information about Titan’s surface, including its solidity, reflectivity and composition. The attempt using the two seas in May demonstrated that specular reflections of the radio frequencies could be detected by the DSN. Essam Marouf (San Jose State), a member of the Cassini radio science team, describes the result: “We held our breath as Cassini turned to beam its radio signals at the lakes. We knew we were getting good quality data when we saw clear echoes from Titan’s surface. It was thrilling.”

The June 18 flyby, T-102, performed the same bistatic scattering experiment, during an approach that took the spacecraft just 3659 kilometers above the surface of the moon. Both flybys also experimented with radio occultation, as this NASA news release explains. Here a signal from Earth is sent through Titan’s atmosphere toward the Cassini spacecraft, which responds with an identical signal. Temperature and density differences can be teased out of the transaction, a method that has been used for several earlier occultations of Saturn.

The May flyby demonstrated that signal lock could be achieved quickly, making the method a useful tool in our efforts to track atmospheric variations during Titan’s changing seasons.

“This was like trying to hit a hole-in-one in golf, except that the hole is close to a billion miles away, and moving,” said Earl Maize, Cassini project manager at NASA’s Jet Propulsion Laboratory in Pasadena, California. “This was our first attempt to precisely predict and compensate for the effect of Titan’s atmosphere on the uplinked radio signal from Earth, and it worked to perfection.” 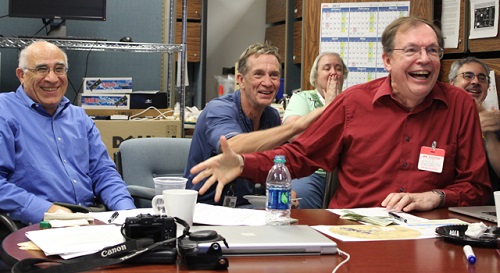 Image: Cassini team members react with excitement to the successful receipt of radio signals bounced off of Titan during a flyby on May 17, 2014. Credit: NASA/JPL-Caltech

If only we had a spacecraft as capable as Cassini orbiting Uranus and Neptune, as at least one commentator here noted after yesterday’s post on ODINUS, twin spacecraft that would orbit the two worlds in a new proposal for the European Space Agency. We could then imagine repeated flybys of Triton, that mysterious geologically active moon that circles Neptune in a retrograde orbit, while performing a variety of studies on the satellite system at Uranus. I want to drop back into the ODINUS paper to cite its statements on this matter, which remind us how little data we have on these moons since our only close encounter has been through the Voyager flybys:

The satellites of Uranus and Neptune are poorly known, mostly due to the limited coverage and resolution of the Voyager 2 observations. The Uranian satellites Ariel and Miranda showed a complex surface geology, dominated by extensional tectonic structures plausibly linked to their thermal and internal evolution… Umbriel appeared featureless and dark, but the analysis of the images suggests an ancient tectonic system… Little is known about Titania and Oberon, as the resolution of the images taken by Voyager 2 was not enough to distinguish tectonic features, but their surfaces both appeared to be affected by the presence of dark material.

As for Triton, it is itself a prime inducement to put such a mission together:

The partial coverage of the surface of Triton revealed one of the youngest surfaces of the Solar System, suggesting the satellite is possibly more active than Europa… Notwithstanding this, the surface of Triton showed a variety of cryovolcanic, tectonic and atmospheric features and processes… The improved mapping of these satellites, both in terms of coverage and resolution, would allow to study their crater records and their surface morphologies, which in turn would provide a deeper insight on their past collisional and geophysical histories.

Both Galileo and Cassini have given us in-depth looks at a gas giant and its satellites, and we now ponder the kind of follow-ups that will investigate specific areas like the interior of Jupiter (Juno) and specific Jovian moons like Ganymede, Callisto and Europa (the JUICE mission). Cassini’s successes have been spectacular, but I like the approach that Diego Turrini and his colleagues take when they observe that comparative studies of the gas giants involving separate missions demand the completion of each before a full assessment of their data can begin.

Instead, Turrini argues for ODINUS as “…two M-class spacecraft to be launched toward two different targets in the framework of the same mission.” The tradeoff is likewise obvious: While we get comparative planetary data — in this case on the ice giants Uranus and Neptune — in a shorter timeframe, we also need to produce two spacecraft and manage them simultaneously, likely limiting the amount of instruments in the scientific payload of each. Can we find a way to do this while still achieving the high-quality science we expect from separate dedicated missions?

It’s an open question, and every Cassini success speaks to the value of the more traditional approach, but we should be looking at ways to speed up the comparative data return in future missions. It will be interesting to see how ODINUS fares among its ESA critics. The Turrini paper cited here and yesterday is “The Scientific Case for a Mission to the Ice Giant Planets with Twin Spacecraft to Unveil the History of our Solar System,” submitted to Planetary and Space Science (preprint).