When Carl Sagan and Iosif S. Shklovskii discussed travel to another galaxy in Intelligent Life in the Universe (Holden-Day, 1966), they considered the problem from the standpoint of the technologies then under discussion by theorists like Robert Forward and Robert Bussard. As I mentioned yesterday, the authors found hibernation interesting, drawing on the ideas of the Swedish biologist Carl-Göran Hedén, with whom Sagan was then in contact. But it was time dilation that took center stage in their book, and that required stunning velocities. To reach M31, the Andromeda galaxy, in a human lifetime would require a velocity of 0.99999 c.

Behind the relativistic spacecraft on Earth, millions of years would have passed, but the same crew that departed would reach their destination. Here is Sagan discussing the matter. And a brief note: Sagan’s practice was to interleave his own material with that of Shklovskii, so that while the names of both authors are on the title page, it’s easy enough to extract who wrote what because Sagan’s material is marked paragraph by paragraph where it is inserted. So these are Sagan’s thoughts on time dilation, from the perspective of those left behind on Earth: 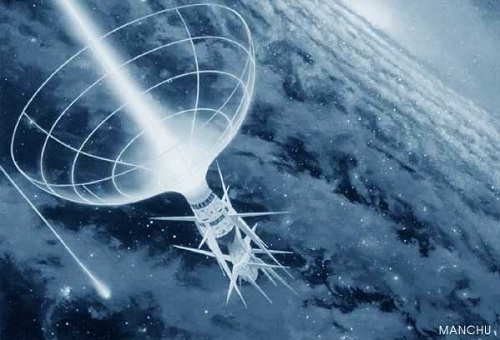 Now things get interesting, because a spacecraft moving with a constant acceleration of 1 g needs just a year to be traveling close to the speed of light. But Einstein’s special relativity reminds us that continuing to accelerate would not take the craft faster than the speed of light, but only closer and closer to it. As that process continues, time dilation gets more and more extreme. Sagan continues:

Thus, for a round-trip with a several-year stopover to the nearest stars, the elapsed time on Earth would be a few decades; to Deneb, a few centuries; to the Vela cloud complex, a few millennia; to the Galactic center, a few tens of thousands of years; to M31, the great galaxy in Andromeda, a few million years; to the Virgo cluster of galaxies, a few tens of millions of years; and to the immensely distant Coma cluster of galaxies, a few hundreds of millions of years. Nevertheless, each of these enormous journeys could be performed within the lifetimes of a human crew, because of time dilation on board the spacecraft.

When I was first getting involved in interstellar studies and talking to as many people as I could track down with experience in the field, I had a phone conversation with Gerald Nordley, whose work I was familiar with in places like Analog. I remember an off-the-cuff remark Nordley made, that it would make sense for the first human expedition to Alpha Centauri to be conducted at .86 the speed of light. Why that number? Because if you can reach .86 c, the time compression factor is two. Your crew experiences half the amount of time that those left behind will experience. And that makes for an Alpha Centauri crossing of about three years, on the order of Magellan’s circumnavigation of the Earth.

Of course, this is all so highly theoretical that it beggars description. How do you get velocities like that? We saw yesterday that while Carl Sagan had a deep interest in the work of Robert Bussard on interstellar ramjets (he described the ‘elegance in its conception,’ cited the fact that it violated no physical principles, and thought a Bussard ramjet could be built within a century), later studies have revealed serious flaws in the concept. In the archives here are a number of articles exploring ‘fixes’ to the original Bussard idea, and in coming months I’ll reprise these possibilities. Sagan also explored antimatter solutions but saw problems in manufacture and containment.

But even if we could somehow manufacture antimatter in sufficient quantities and contain it safely, the equations were merciless. Remember, we’re trying to reach 0.99999 c to make this Andromeda crossing. Even assuming complete conversion of the mass of the fuel into energy, with all energy released utilized for thrust (an ideal unlikely to be achieved), the total mass of the fuel would have to be 200,000 times greater than the mass of the remainder of the spacecraft. As Sagan dryly wrote: “…an interstellar space vehicle powered by anti-matter and requiring a mass ratio of 200,000 does not seem to be an elegant solution to this problem.”

In Martyn Fogg’s paper “The Feasibility of Intergalactic Colonisation and its Relevance to SETI” (citation below), having looked at the problems of the Bussard ramjet and pondered human life suspension, the author considers worldships as a non-relativistic way to reach another galaxy. Here the difficulties are likewise immense, with one concept (by Robert Page Burruss) involving a worldship a thousand miles wide carrying up to 50 billion people, to be sent on the ultimate generational voyage, one lasting hundreds of thousands of generations. As science author Adrian Berry notes, this is five times the past age of the human species.

Sagan didn’t like the mass ratio of his Andromeda ship, but Burruss came up with 500 billion tons of antimatter and an acceleration period of 50,000 years to make this work. And you can forget about relativistic efforts even with all that antimatter. This is a craft that would reach about 40 percent of the speed of light, so that relativistic time dilation is slight. Berry also notes that there is no provision in this design for artificial gravity generated by spinning the ship, making it an open question how evolution would treat a human population that evolved over a period of millions of years in weightless conditions. Fogg calls the Burruss ship “too ‘heroic’ to be taken seriously.” He also states:

…because of the great length of time involved in an intergalactic voyage the problem of creating a closed ecosystem capable of supporting a viable population is far greater. The only self-contained ecosystem we have knowledge of that remains habitable over a time scale of millions of years is the Earth’s biosphere. Life flourishes under conditions maintained by atmospheric, chemical, geological and biological feedback loops, driven ultimately by sunlight and the internal heat of the Earth. A galaxy ship carrying a fully and continuously functioning ecosystem might thus have to be the size of a small planet and capable of carrying a powerful long term energy source.

Which gets us to the most interesting part of the above description: A worldship the size of a small planet carrying its own long-term energy source sounds much like what Adam Crowl described on Monday, a small star and planet pair that can be flung out of the galactic core. Tomorrow I want to look at this idea — the adjustment of the trajectories of the stars themselves to migrate outward — as a non-relativistic solution to galaxy-spanning distances.

The Burrus paper is “Intergalactic Travel: The Long Voyage from Home,” Futurist 21 (1987), 29-33. And here again is the Fogg citation: “The Feasibility of Intergalactic Colonisation and its Relevance to SETI,” Journal of the British Interplanetary Society Vol. 41 (1988), pp. 491-496.