I’ve always loved the idea of an O’Neill space habitat because of the possibility of engineering a huge environment to specification. That notion translates well to worldship ideas — a multi-generational journey would certainly be easier to take in an environment that mimicked, say, a Polynesian island, than aboard something more akin to a giant metal barracks. But best of all is to take your environment with you, which is why the thought of moving entire stars and planets to another location has such appeal when we’re talking on an intergalactic scale.

Adam Crowl reminded us of the possibilities on Monday:

Back in November of 1973, Stanley Schmidt’s The Sins of the Fathers began as a three-part serial in Analog, then under the editorship of Ben Bova, who had taken over after the death of John Campbell in 1971. Schmidt would go on to become Analog’s editor himself in 1978, only retiring recently, so that his own tenure at the magazine matched Campbell’s long run. The Sins of the Fathers would be published as a paperback in 1976 with a cover by the brilliant SF artist Richard Powers. Lifeboat Earth would continue the journey in the Berkeley paperback of 1978. 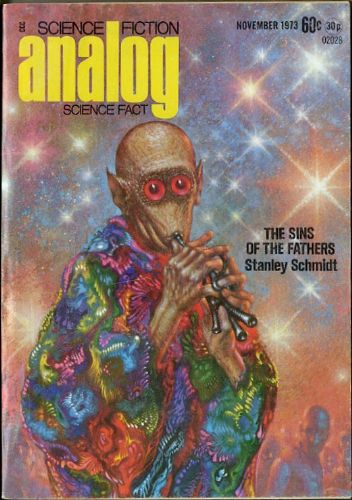 Schmidt’s plan was to make an intergalactic crossing to M31, the Andromeda Galaxy, with the help of alien technologies. The plot involves an explosion in the core of the galaxy on such a scale that planets will be rendered uninhabitable throughout the Milky Way. Fortunately, an alien race called the Kyrra has arrived to help, equipping the Earth with what Schmidt called an ‘induced annihilation’ drive that converts matter to energy without the need for antimatter. With this gigantic rocket nozzle mounted at the South Pole, the Earth is nudged out of its orbit, at which point the Kyrra’s FTL technology (Schmidt calls this the Rao-Chang drive) cuts in.

Of course, the effects of maneuvering the planet in this way are substantial. Schmidt explained them in an article called “How to Move Planet Earth,” which ran in the May, 1976 issue of Analog, after the serialization of his novel was complete. Here’s a bit of this:

Perhaps the most immediately striking of these [effects] is to change the effective ‘up-down’ direction. To a person standing on what had been a level plain (or floor or ocean), the appearance and feel of this is exactly as if the Earth were tilting under his feet. All over the Earth, the ground appears to slope downward to the south. The amount of tilt, and the strength of the effective field, vary with latitude… One of the first globally important consequences of this effective tilting will be a tendency for the oceans and most of the atmosphere to flow ‘downhill’ and concentrate (to such extent as they aren’t blasted or blown away) at and near the South Pole.

And so on. Schmidt works through all the consequences in the article, which recounts his valiant attempt, having plugged in magical alien technologies, to work out their physical effects according to known physics. Surely he was smiling when he wrote: “But these things — the Rao-Chang, induced annihilation, and exhaustless conversion process, together with their logical implications — are the only really new physics I have assumed.” I love that ‘only’! In any case, the journey is a nightmare, with the alien technologies consuming what Earth resources they haven’t already destroyed in the propulsion process, so that by the time our battered world gets to M31, the few survivors must get off the planet and onto another one.

Robert Metzger, who for years wrote the science column in the Science Fiction Writers of America’s Bulletin, wrote a novel called Cusp (Ace, 2005) in which the Sun erupts with a massive, propulsive jet and begins a journey of its own, with the Earth suddenly encircled by enormous ring-like structures that help propel it along with the parent star. Here we’re in the company of quantum supercomputers (the ‘CUSP’ of the title) and technologies evolving into the Singularity so often speculated about in science fiction and elsewhere. Needless to say, the physical effects of moving the planet and star are as acute as they are in Schmidt’s novel.

In Bowl of Heaven (Tor, 2012), Gregory Benford and Larry Niven looked at ways to move an entire star to travel the galaxy — the sequel, ShipStar is just out (Tor, 2014), and nearing the top of my stack. Imagine half of a Dyson sphere curved around a star whose energies flow into a propulsive plasma jet that moves the entire structure on its journey. Here the notion of living space may remind you of Niven’s Ringworld, that vast structure completely encircling a star, though not enclosing it. The difference is that in the ShipStar scenario, most of the ‘bowl’ is made up of mirrors, with living space just on the rim.

I see the ShipStar model as a modified Shkadov thruster, a way of moving entire stars that the physicist Leonid Shkadov first described in 1987. In both cases, we’re talking about what can be called ‘stellar engines’ that use the resources of the star itself to create their propulsion. Would such a vast structure be detectible by another civilization? As with Dyson spheres, the size of the objects makes it feasible to consider picking them up in exoplanet transit data. Scottish physicist Duncan Forgan has considered the transit signature of a Shkadov thruster. As with the work of Richard Carrigan, the man whose searches for Dyson spheres have helped to define ‘interstellar archaeology,’ the Shkadov thruster could play a role in future SETI searches.

As is true of all such searches, we have to determine whether what we are seeing is fully explicable in terms of natural phenomena or whether there is a case to be made for technology, and I would rate the chances of our finding a Shkadov thruster quite low. But searching for artifacts in our existing astronomical databases is clearly a worthwhile idea. Certainly a civilization that had the power to move a star might find it a livable way to embark upon journeys lasting millennia. In such ways, a trip to another galaxy is not inconceivable even if tens of thousands of generations might live and die along the way. The key question: What compelling reasons might drive such a journey?

What I haven’t had the chance to get to today are astronomer Fritz Zwicky’s ideas on moving stars, an omission I’ll try to rectify next week. The Forgan paper mentioned above is “On the Possibility of Detecting Class A Stellar Engines Using Exoplanet Transit Curves,” accepted for publication in the Journal of the British Interplanetary Society (preprint). Leonid Shkadov’s paper on Shkadov thrusters is “Possibility of controlling solar system motion in the galaxy,” 38th Congress of IAF,” October 10-17, 1987, Brighton, UK, paper IAA-87-613.