We have interesting solar sail news coming up later this week, so it seems a good time to lead into it with some thoughts on NASA’s early solar sail work. For the theoretical work for a sail rendezvous with Halley’s Comet was well along in the 1970s, when Louis Friedman, later a founder and executive director of The Planetary Society, led what would become the first space agency attempt to develop an actual sail mission. Friedman’s interest in and commitment to sail ideas will become apparent as this week progresses and we look at other sail designs.

Much of the impetus for a NASA sail study in the 1970s — a $4 million effort at the Jet Propulsion Laboratory in 1977 and 1978 — can be traced back to Jerome Wright, an engineer at the Battelle Memorial Institute in Ohio. In his book Starsailing: Solar Sails and Interstellar Travel (John Wiley & Sons,1988), Friedman recalls a meeting of the Advanced Projects Group at the Jet Propulsion Laboratory in which he learned about Wright’s newest idea from Chauncey Uphoff, a senior member of JPL’s mission design section. Friedman describes the event:

Then, at the group meeting, Chauncey Uphoff and Phillip Roberts dropped the bombshell. “Jerry Wright has found a possible way to rendezvous with Halley’s Comet,” Chauncey announced.

“You mean fly-by, not rendezvous,” I said.

“No, I mean rendezvous.”

“With a trip time of ten years?”

“Would you believe four years?”

Image: Louis Friedman, former executive director of The Planetary Society and one of its founders, who led NASA’s study of a solar sail mission to Halley’s Comet.

Wright’s book Space Sailing (Routledge, 1992) lays out the basic concepts behind solar sails and the principles behind navigating with a sail in space — it was Wright who first realized that Halley’s Comet’s 1986 appearance in the inner Solar System offered a chance to try the technology out on an actual mission. Wright would be invited to conduct a seminar at JPL on sail techniques in May of 1975 that led to his joining the small team there in December of that year, with NASA’s approval of a study to design a vehicle and mission concept to the comet.

We’ve looked at solar sailing frequently on Centauri Dreams and traced the development of the idea from the first technical paper, Carl Wiley’s “Clipper Ships of Space,” which appeared in Astounding Science Fiction in May of 1951. Wiley, of course, built on ideas dating back to the time of Kepler, with major work accomplished by Konstantin Tsiolkovsky and Fridrickh Arturovich Tsander in the early part of the 20th Century. It’s interesting to learn from Friedman’s book that Wiley, then working as an engineer at Rockwell, came to some of the technical presentations at JPL as the Halley’s Comet idea was discussed.

Friedman credits Ted Cotter, working at Los Alamos, with the first presentation of a spinning sail. See A Sail Mission Emerges for more on Cotter’s ideas, and be aware that his 1958 memorandum “An Encomium on Solar Sailing,” distributed internally at Los Alamos, is now online. Spinning the sail helps because it allows the sail to be stabilized without the help of an external structure. I should also mention Richard Garwin, whose paper on solar sails that same year led to a lifetime of interest in the concept. Friedman credits Garwin with helping to inspire NASA’s later interest in a sail mission, leading NASA administrator James Fletcher to commission studies on sails that were assigned to Jerome Wright during his days at Batttelle.

So we can see a flurry of sail interest in the agency in the mid-1960s — an early meeting on solar sail design was actually held at NASA’s Langley Research Center as early as 1960 — but with the end of the Apollo missions, a dwindling space program had no plans for specific missions. Thus at the time Jerome Wright began talking about a Halley’s Comet mission in the mid-1970s, little other work was being done on sail technologies. Wright was more or less the only game in town.

Then Wright found the Halley rendezvous opportunity. By the time the JPL study team began its task, two major developments had occurred. First, NASA was developing the space shuttle, which promised to carry large-volume payloads into orbit. Second, there had been great advancements in the technology of deploying huge structures in space. The shuttle also made it possible for scientists to test space concepts, and the JPL study team hoped to test the solar sail from a shuttle in orbit.

The positive results of the 1976 and early 1977 JPL studies captured the imagination of the new director of the Jet Propulsion Laboratory, Dr. Bruce Murray. With his approval, the study team made a major effort to put together a project plan for a rendezvous with the comet. This work, however, had to be done rapidly. In order to launch in late 1981, the project would have had to start moving by the end of 1978. 1 was put in charge of the study and we quickly wrote a proposal for a one-year study and gave it to NASA.

The original NASA design called for a sail of 800 meters to the side supported by four diagonal cross beams, to be launched by the Space Shuttle in 1981. But in 1977 a ‘heliogyro’ approach invented in the mid-1960s by Richard MacNeal and John Hedgepath won out, featuring 12-kilometer long sails made up of narrow strips that would spin up like helicopter blades to keep the sail rigid. Unlike the earlier design, the heliogyro could use centrifigual force from its spin to unreel the blades from storage drums, thus requiring no human assembly in orbit. 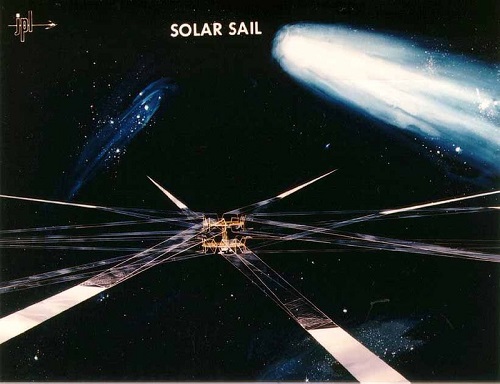 NASA’s acceptance of the proposal led to the design study that brought in industrial contractors, included support from NASA Ames and Langley, work that resulted in the conclusion that solar sailing was indeed feasible. The question, though, was whether it was practical to speak in terms of a Halley’s Comet rendezvous given the time constraints involved. NASA would ultimately turn down the proposal as being based on a technology that was not sufficiently mature. When I asked Dr. Friedman about this at the last 100 Year Starship symposium, he said NASA was probably right. The Halley’s sail was pushing too far, too fast for its time.

Cost was a factor as well, with a price tag estimated at $500 million — remember the budgetary morass NASA found itself in with Space Shuttle cost overruns in this era. Other comet missions were considered, but in the end the United States did not launch a dedicated mission to Halley’s Comet. The story of comet rendezvous, the Giotto mission from ESA, the Soviet Vega spacecraft and the Japanese Suisei and Sakigake probes, makes for fascinating reading, but in terms of solar sails, it would be a long wait before JAXA’s IKAROS sail took flight in 2010. Before then, though, Louis Friedman would be involved in other attempts, one of which we’ll discuss tomorrow.