We’re coming up on the tenth anniversary of Centauri Dreams, and it doesn’t surprise me even remotely that two of the earliest stories I ever wrote for the site involve solar sails. August 17, 2004’s Solar Sail Test by Japan talks about the Japanese Institute of Space Astronautical Science testing sail deployment strategies, and the August 14 entry, Cosmos 1 Solar Sail Closer to Launch, briefly describes the privately funded sail that was developed by The Planetary Society’s efforts, with financial contributions from members and major backing from Ann Druyan’s Cosmos Studios. 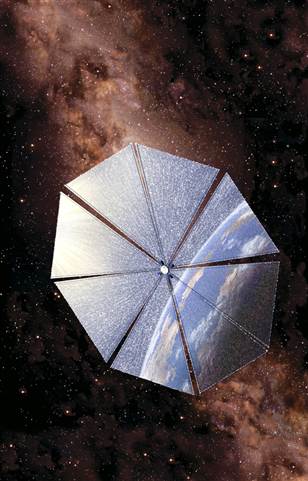 I’ve been fascinated with space sailing since first encountering the notion in 1960s-era science fiction, particularly Clarke’s “The Wind from the Sun” and Cordwainer Smith’s “The Lady Who Sailed the Soul.” What I lacked back then, though, was an appreciation for the challenge posed by the rocket equation, which demands so much more propellant the faster you want to go. Space missions demand huge mass ratios (the weight of the fueled rocket compared to the same rocket without fuel), and a chemical rocket on a deeply ill-advised Alpha Centauri mission would, to reach the target within a human lifetime, demand an amount of propellant larger than all the mass in the observable universe. Rocket scientists call that sort of thing a ‘showstopper.’

So using solar photons to impart momentum while leaving heavy propellant out of the vehicle entirely makes eminent sense, but it’s been a long, slow road from theory to implementation. We saw yesterday that sail ideas got a serious bump in interest when Jerome Wright, who had been studying sail techniques, began to look into a possible rendezvous mission to Comet Halley, and soon NASA had Louis Friedman’s team hard at work investigating the possibilities. Budgeting issues, a tight schedule and an untested technology accounted for the decision not to pursue the sail mission.

We did see what could be described as a solar sail test in 1993, when Russian scientists deployed Znamya 2 from the Mir space station, although Znamya was not a free-flying device and was designed as a thin-film mirror. The idea was to experiment with beaming solar power to the ground, but dealing with large, lightweight reflective material and unfurling it in space makes for a reasonable demonstration of some aspects of sail technology. The Japanese experiments in 2004 involved deployment of sail materials from a sub-orbital sounding rocket.

And I should mention the two communications satellites — INSAT 2A and 3A — launched by India in 1992 and 2003, each of which used sail material to offset the torque from solar pressure on their multi-panel solar arrays. You see, we did have plenty of data about the pressure photons could exert on objects in space — controllers had used vanes mounted on the Mariner 10 spacecraft for attitude control, and Louis Friedman recounts in his book Starsailing: Solar Sails and Interstellar Travel that NASA, experimenting early in the space era with small metal needles launched into the ionosphere to study communications, found that sunlight pressure was a significant factor in their trajectories.

So when The Planetary Society, of which Friedman was then executive director, took up private sail work that had been developed through the World Space Foundation after the latter group’s demise in 1998, it was building on known physics and an idea in need of deployment and testing in space. A suborbital test of the deployment system, using a sail with only two blades, was attempted in 2001, only to fail when the spacecraft did not separate from the Volna booster. The full 100-kilogram spacecraft, built at the Babakin Space Center and the Space Research Institute in Russia, was paired with another Volna, a former intercontinental ballistic missile.

Cosmos 1 was launched on June 21, 2005 from a Russian submarine in the Barents Sea, but failure aboard the booster prevented the spacecraft from reaching orbit. Had it succeeded, this would have been the first orbital test of a true solar sail. The $4 million project was tiny by government space agency standards, but it produced an eight-blade sail, with each blade fifteen meters in length and a total surface area of some 600 square meters. The plan would have been to attain a circular orbit at 800 kilometers, at which point the sail blades would have deployed.

It surely would have been a test as exciting as the Japanese deployment of the IKAROS sail had everything gone according to plan. The deployed sail was to have used the momentum of solar photons to raise its orbit by 50 to 100 kilometers over the course of the 30-day mission. There were also plans to bounce microwaves from NASA’s Goldstone facility of the Deep Space Network off the sail to measure the effect of microwave beaming, the physics of which had already been demonstrated in laboratory work by James and Gregory Benford.

The Cosmos 1 launch failure was hard to take, but the idea of privately funding a significant space mission certainly did not die here, and as we’ll see tomorrow, The Planetary Society has continually renewed the effort to get a craft called LightSail into space in the context of a multi-vehicle project. As the space agencies continue their work, it’s heartening to see the commitment of volunteers and contributors to private projects that leverage public interest in these technologies and show what can be done on shoestring budgets and sheer dedication.