As Cosmos 1 demonstrated, launching solar sails isn’t always easy. The Planetary Society’s sail perished thanks to a malfunctioning Volna booster not long after launch in 2005. When NASA attempted to launch its NanoSail-D in 2008, a problem aboard the Falcon 1 booster destroyed the craft. And when the agency launched the backup, NanoSail-D2, in December of 2010, the CubeSat-based sail failed to eject from the FASTSAT satellite it was aboard. Just when all seemed lost, NanoSail-D2 ejected on its own on January 17, 2011 and deployed its sail soon after.

Now we’re looking at a new Planetary Society venture called LightSail-A, which grows out of the NanoSail-D project and, according to news that should be firmed up tonight, should be ready for launch in the near future. As with Cosmos 1, the funding for LightSail-A was raised from private sources and Planetary Society membership dues, with the spacecraft itself being built by Stellar Exploration Inc. out of San Luis Obispo, CA. With mylar sails 4.5 microns thick, the sail will extend upon deployment to cover 32 square meters. Three CubeSat spacecraft form a ‘bus’ about the size of a shoebox that weighs in at no more than 4.5 kilograms. 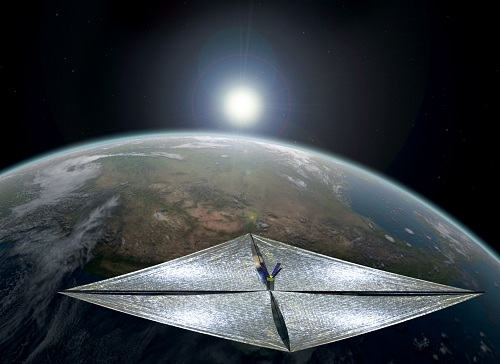 During the past two years, LightSail has come of age. The solar sail itself demonstrated a full deployment back in 2011, but the guts of the spacecraft were far from mature. Project manager Doug Stetson and his team have been shaking out bugs and overhauling LightSail’s electronics, attitude control, software and communications systems. Next up is a full “day in the life” flight system test on Wednesday, June 4 that includes another sail deployment and full operation of the spacecraft as if it were in orbit. I’ll be on hand at Cal Poly San Luis Obispo to observe and report.

The test in question had to be delayed because of problems involving the TRAC (Triangular Rollable and Collapsible) boom system so crucial in proper deployment of the sail. A breakdown of the three deployment problems the team uncovered is here. Later testing on June 24 showed that fixes for the power anomalies, spacecraft processor overload and other boom deployment issues seem to have worked. Davis has made a video of the June 24 deployment test available; he’s also offering regular updates explaining technical features of the diminutive spacecraft.

The LightSail project involves three craft, the goal of the first being to test deployment and basic operations at an altitude of 800 kilometers. A second mission, LightSail-B, will collect scientific data and demonstrate controlled solar sailing, while a third has the ambitious goal of reaching the L1 Lagrangian point, a useful position from which to detect solar activity producing geomagnetic storms.

At this point it’s always a good idea to distinguish between the phenomenon LightSail-A will be exploiting — the momentum imparted by solar photons — and that other means of ‘sailing’ through space, the solar wind. The sailing metaphor is what can make this confusing. The solar wind consists of particles streaming out from the Sun, moving much slower than the speed of light and offering a push to spacecraft designed to exploit them. So-called ‘magsails’ are under study that could use the solar wind for fast interplanetary transport, but the force from the solar wind is a thousand times less than the photon force a solar sail can draw on in its operations. By ‘solar sailing,’ then, I refer to drawing on the momentum imparted by massless photons.

We’ll know more about LightSail-A’s shakedown cruise this evening, when The Planetary Society hosts a live webcast from 2200-2330 EDT (0200-0330 UTC), billed as the venue for “a major announcement about our solar sail spacecraft.” Expect a tour inside the cubesat and presentations by the engineers behind it, as well as an announcement about its launch. Confusingly, The Planetary Society is referring to its sail as both LightSail-A and LightSail-1, but I suspect that by the time the evening is over, we’ll have the basic nomenclature set.