Reflections on the LightSail Project

I was delighted to see Doug Stetson, the program manager for The Planetary Society’s LightSail effort, quoting Johannes Kepler in last night’s webcast. If you missed the Pasadena event, which took place at the KPCC Crawford Family Forum in Pasadena, CA, you can watch the recorded session here, and I highly recommend it. Kepler’s 1610 letter to Galileo added context to the excitement over LightSail, for solar sailing has a rich history. Kepler wrote of providing “ships or sails adapted to the heavenly breezes,” and added that “there will be some who will brave even that void.”

It’s an inspiring thought as we now look into the launch of a privately funded sail that can join IKAROS and NanoSail-D in a series of operational experiments that will hone our sail knowledge. The chief news of the Pasadena meeting was the announcement of an approximate launch date. LightSail-1 is scheduled to go into space aboard a SpaceX Falcon Heavy rocket in April of 2016. The quick video Mat Kaplan showed illustrating the Falcon Heavy in flight was likewise energizing: This is a booster made up of three Falcon 9 cores, meaning 27 rocket engines. The Planetary Society’s Jim Bell calls it a rocket that ‘opens up the outer Solar System.’ 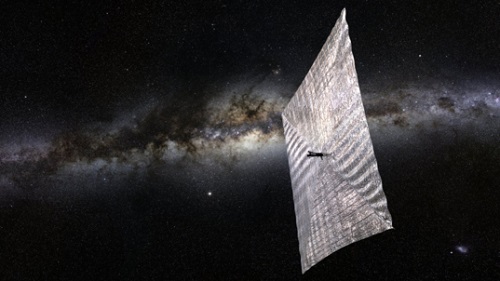 But let’s clear up that problem of sail nomenclature I referenced yesterday. What is being called LightSail-1 is the designation for two solar sail CubeSats, LightSail-A and LightSail-B. Whether LightSail-A or LightSail-B is the one to fly next depends upon systems tests that will be completed in coming months, as Jason Davis explains in LightSail Update: Launch Dates:

If LightSail-A goes to space, it won’t reach a high enough altitude for the momentum it gains from solar sailing to overcome atmospheric drag. The spacecraft will deploy its sails, capture images, and communicate with the ground, giving engineers a chance to work through any problems en route to a full-fledged solar sailing flight.

LightSail-B, on the other hand, will embark upon true solar sailing, using the momentum of solar photons to increase its velocity. Usefully, both missions now seem likely to fly. Stetson told the Pasadena audience that an opportunity exists for launching LightSail-A to a lower orbit, a test flight that would occur in May of 2015. Joining the crowd by Skype, he went on to say that a test like this would validate the sail by putting it through a full deployment in lower Earth orbit.

The image below, shown by Stetson during the presentation, shows LightSail-B capturing forward momentum from solar photons. You can see the changes in attitude as the sail, orbiting the Earth, adjusts its position to maximize the effect of sunlight. Ultimately, turning the sail at key points in the orbit allows the orbit to be raised, allowing the prospect of escaping Earth’s orbit entirely. We can envision a day when CubeSats, those tiny marvels of inexpensive engineering, could be equipped with sails and sent out in swarms to explore the Solar System. 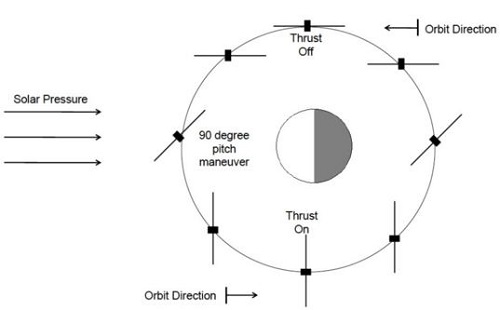 Image: In order to capture forward momentum from the sun’s rays, LightSail-1 will make two 90 degree pitches during an orbit. Credit: LightSail Team / The Planetary Society.

Planetary Society CEO Bill Nye refers to solar sailing in terms of power, utilizing ‘a fusion reactor at a safe distance, the Sun.’ Assuming we get LightSail-B into space in the spring of 2016, the surrounding package will be quite interesting. LightSail will launch embedded within a satellite called Prox-1. The latter, developed at Georgia Tech, was designed to conduct autonomous proximity operations in which two spacecraft operate at close quarters. Prox-1 will release the sail and then rendezvous with it, closing to within fifty meters and capturing images of LightSail. The actual sail deployment will occur after several weeks of operations.

We’re going to get some remarkable video of sail deployment, both from the cameras aboard the LightSail craft as well as those aboard Prox-1. System engineer Barbara Plante (Boreal Space/Ecliptic Enterprises) went on to discuss spacecraft attitude control after showing the crowd a large piece of the 4.5 micron sail material, roughly 1/50th the width of a human hair. Sail packaging and deployment is complicated business, but Plante said she was struck by the elegance of the design, referring to solar sailing as a ‘green method’ for exploration.

Looking to the future, David Brin joined the group by Skype as the panel discussed the implications of today’s sail experiments. Solar sails run into the obvious problem of diminishing sunlight the farther one goes from our star. The way around that problem is to imagine a future space infrastructure for power generation, one in which power is readily available for large laser arrays that can illuminate a sail and push it entirely out of the Solar System. Brin suggested the Sun’s gravitational lens at 550 AU and beyond as a natural target for later generation sails, a way of exploiting the extreme magnifications this natural lensing provides for our instruments.

For me, the word ‘lightsail’ has always referred to a sail under this kind of beamed power, and now I’ll have to be careful not to confuse that kind of sail with the experiments LightSail-1 will offer in nearby space. But we always need to think about how today’s efforts play into a larger scenario, including so-called ‘Sundiver’ missions that unfurl their sails after a close pass by the Sun to achieve high accelerations. It seems fitting to end this piece on LightSail-1 with Louis Friedman’s thoughts on such missions, he being a key player in making this happen.

Friedman, as we’ve seen, worked at the Jet Propulsion Laboratory on the design of a large sail targeting Comet Halley, and although that mission never flew, he has been an advocate of sail designs for decades, anticipating that we would one day understand the virtues of leaving propellant behind and shedding the rocket equation altogether. In his 1988 book Starsailing: Solar Sails and Interstellar Travel, he brings his experience to the long view:

[The sail] would provide a nearly perfect means of interstellar travel — except that it requires sunlight, and we will run out of that as we leave the solar system, a circumstance that could leave us becalmed, like a terrestrial sailboat on a windless ocean. We could, however, use a series of gravity assist maneuvers to keep ourselves moving along. We could fly around Jupiter, for instance, then head in toward the sun, picking up a lot of speed with our sail. Then we could swing around and head out past Jupiter and Saturn, picking up even more speed. With a large sail and with a close fly-by of the sun, assuming good thermal protection, we could conceivably exit the solar system at a rate of 40 astronomical units a year — in other words, we could travel through the whole solar system in about 1 year. Even at that great a speed, however, we would not reach the second star for 6,600 years! Not so good. Nevertheless, this use of gravity assist and solar sailing combined offers real promise for the use of solar sails even for traveling to the outer planets, which may extend the range of the interplanetary shuttle.

But Friedman has interstellar thinking in his bones. Intimately familiar with the work of Robert Forward, he goes on to describe the latter’s concept of a 3.6 kilometer sail that would, using laser beaming technologies, get a one-ton payload to Alpha Centauri in about 40 years, reaching a bit more than one-tenth of lightspeed. It was one of many Forward designs that speculate on what a human presence in space and the immense power of directed light could accomplish.

After the years at JPL, working with Bruce Murray and Carl Sagan, the time on Voyager, the 32 years as executive director of The Planetary Society, Louis Friedman, one of its founders, is seeing yet another result of his efforts pay off. I can assure you that when LightSail-1 flies, we’ll pop open a bottle of Champagne at my house, and the first toast of the evening will go to him.