When Clifford Singer proposed in his 1980 paper that a stream of pellets could be used to drive an interstellar vehicle, the idea emerged at a time when Robert Forward had already drawn attention to a different kind of beamed propulsion. Forward’s sail missions used a beamed laser from an array near the Sun, and he explored the possibility of building a Fresnel lens in the outer Solar System to keep the beam tightly collimated; i.e., we want the narrowest possible beam to put maximum energy on the sail.

It was an era when huge structures in space defined interstellar thinking. Forward’s lasers were vast and he envisioned a 560,000-ton Fresnel lens in deep space, a structure fully one-third the diameter of the Moon. Such a lens made collimating the laser beam a workable proposition, to say the least — at 4.3 light years, the distance of Alpha Centauri A and B, such a beam is still converging, and would not reach the size of its 1000 kilometer transmitting aperture until an amazing 44 light years out.

Singer’s ideas were just as big, of course, and we saw yesterday that they demanded not only a series of stations to keep the pellet beam collimated but also an accelerator in the outer Solar System that would be 105 kilometers long. If we’re building enormous structures to begin with, wouldn’t it be easier to just send laser photons than a stream of particles or pellets? The answer, and it’s surely one that occurred to Singer as he examined Forward’s ideas, is that there is an inherent downside to photon propulsion. Let Gerald Nordley explain it:

The pellet, or particle, beam propulsion system is conceptually similar to photon beam propulsion systems discussed by Forward and others. While the concept is feasible, the reflected photons must still move at the speed of light and so carry away much of the energy used to generate them. The velocity of a beam of particles, however, can be varied so that the reflected particles are left dead in space and thus waste much less energy.

Geoffrey Landis described the same problem in his 2004 paper “Interstellar Flight by Particle Beam.” For all their size, Forward’s laser-propelled lightsails have extremely low energy efficiency, which is why the laser installations have to be so large in the first place. Some of Forward’s proposals reach lasers with power in the range of 7.2 terawatts. So we have an inefficient mechanism forcing not just huge lasers but spectacular lenses in the outer system. I don’t rule out huge structures in space — nanotech assemblers may some day make this possible — but finding ways to eliminate the need for them may bring the day of actual missions closer.

The Nordley quote above is drawn from his website, where slides from a presentation he made at a workshop in 1993 are made available. Nordley had already addressed the matter of particle beam propulsion in a 1993 paper in the Journal of the British Interplanetary Society, in which he discussed a magnetic sail, or ‘magsail,’ as the reflector for the incoming particles. The magsail reflects the particles and, as Nordley notes, thereby gains some fraction of twice their momentum, although he adds that reflector concepts are not limited to magnetic sails.

A retired Air Force officer, Nordley is an astronautical engineer who also writes science fiction (under the name G. David Nordley), author of the highly regarded novella “Into the Miranda Rift” along with numerous other stories mostly in Analog. It was in that magazine in 1999 that he pursued the work on magnetic sails that Dana Andrews and Robert Zubrin had developed, combining their insights with Clifford Singer’s pellet concepts. The result: Mass beam drivers driven by solar power that shoot pellets to a spacecraft whose laser system ionizes them, reflecting the resultant plasma by a magnetic mirror to produce thrust. Or perhaps a self-destruct mechanism within each pellet that would be triggered by proximity to the starship. 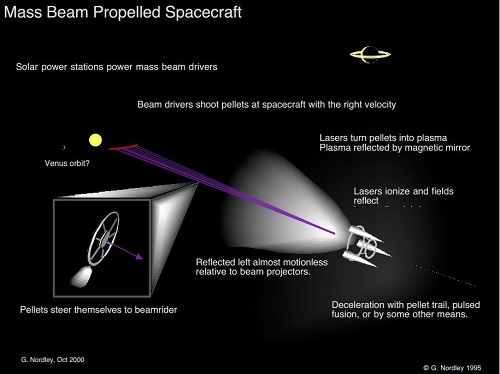 Image: Pushing pellets to a starship, where the resulting plasma is mirrored as thrust. Credit: Gerald Nordley.

Nordley’s pellet stream added a significant new wrinkle to Singer’s in that it would be made up of pellets that could steer themselves to the beam-riding spacecraft. Remember the scope of the problem: Singer needed those stations in deep space to make course adjustments for the pellet stream, which had to hit the spacecraft at distances of several hundred AUs. Nordley talks about nanotech-enabled pellets in the shape of snowflakes capable of carrying their own sensors and thrusters, tiny craft that can home in on the starship’s beacon. Problems with beam collimation thus vanish and there is no need for spacecraft maneuvering to stay under power.

In “Beamriders,” a non-fiction article in the July/August, 1999 Analog, he sees these pellets as weighing no more than a few micrograms, although here again the question of interstellar dust comes into play. Singer had found in his second JBIS paper (see citation at the end of yesterday’s entry) that pellets over a gram in size should be impervious to large-scale dispersion. It would obviously have to be demonstrated that much lighter ‘smart pellets’ like these would not suffer from dust strikes. But the beauty of lighter pellets is that they would rely on shorter accelerators than the 100,000 kilometer behemoth Singer described.

Efficient delivery of the pellet stream can also make for smaller magsails because the incoming stream is tightly concentrated. The pellet concept Singer introduced is thus significantly enhanced by Nordley’s application of nanotechnology, and forces us to ask the question that has infused this entire series of posts: Given the rapid pace of miniaturization and computing, can we imagine a paradigm shift that takes us from smart pellets all the way to self-contained probes the size of bacteria? Developing the technologies by which such minuscule craft would travel in swarms, combining resources for scientific study and communications, will surely energize one stream of interstellar studies in coming decades.