Both the Kepler and Spitzer space telescopes had a role to play in recent work on the planet Kepler-93b, whose size is now known to an uncertainty of a mere 120 kilometers on either side of the planet. What we have here is the most precise measurement of an exoplanet radius yet, a helpful result in the continuing study of ‘super-Earths,’ a kind of world for which we have no analogue in our own Solar System. A third instrument also comes into play, for studies of the planet’s density derived from Keck Observatory data on its mass (about 3.8 times Earth’s mass) and the known radius indicate this is likely an world made of iron and rock.

And that is absolutely the only similarity between Kepler-93b and Earth, for at 0.053 AU, six times closer than Mercury to the Sun, the planet’s surface temperature is estimated to be in the range of 760 degrees Celsius. The planet is 1.481 times the width of Earth. The accuracy of the measurement is the story here, a result so precise that, in the words of Sarah Ballard (University of Washington), lead author of the paper on these findings, “it’s literally like being able to measure the height of a six-foot tall person to within three quarters of an inch — if that person were standing on Jupiter.” 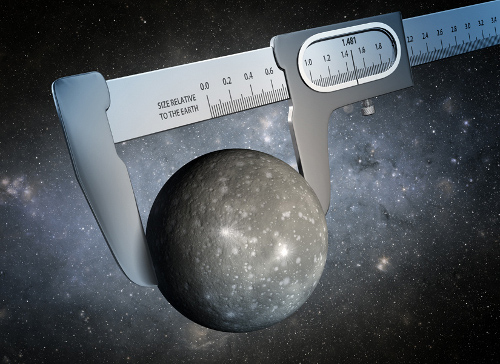 Image: Using data from NASA’s Kepler and Spitzer Space Telescopes, scientists have made the most precise measurement ever of the size of a world outside our solar system, as illustrated in this artist’s conception. The diameter of the exoplanet, dubbed Kepler-93b, is now known with an uncertainty of just one percent. Credit: NASA/JPL-Caltech.

Just how the measurement was made is a story in itself. The Spitzer instrument provided data for seven transits of Kepler-93b between 2010 and 2011, three of them studied with a new observational technique called ‘peak up’ that halved the uncertainty of Spitzer’s own radius measurements. Kepler-93 thus served as a test subject for the new technique, which was developed in 2011 and allows tighter control over how light affects individual pixels in the observatory’s infrared camera. The paper examines all seven light curves in detail.

Meanwhile, we have the Kepler data, which provided light curves as well as the dimming of the star caused by seismic waves in motion in the interior. Now we’re in the realm of asteroseismology, which is a powerful way to probe the makeup of individual stars. Asteroseismic measurements over a long observational baseline can provide useful information about the density of the star (with a precision of 1 percent) as well as its age (within 10%). Such measurements require a long observational baseline at high cadence — cadence refers to the time between observations of the same target — as well has high photometric precision.

When we have both an asteroseismic density measurement of the exoplanet host star as well as a transit light curve, we can improve the precision of our radius measurements. Sara Seager (MIT) and colleagues examined host star densities in relation to planetary orbits and the radius of the star as early as 2003, and later work by a team led by Philip Nutzman (Harvard-Smithsonian CfA) used asteroseismology along with transit light curves to constrain the radius of HD 17156b, highlighting a method that has been found to be relevant to a wide number of recent studies.

The Kepler mission’s long baselines and unprecedented photometric precision make asteroseismic studies of exoplanet hosts possible on large scales… Kepler-93 is a rare example of a sub-solar mass main-sequence dwarf that is bright enough to yield high-quality data for asteroseismology. Intrinsically faint, cool dwarfs show weaker-amplitude oscillations than their more luminous cousins. These targets are scientifically valuable not only as exoplanet hosts, but also as test beds for stellar interior physics in the sub-solar mass regime.

The combination of the Kepler data and Spitzer’s new technique was powerful, and adds luster to the already rich history of Spitzer’s Infrared Array Camera (IRAC) in exoplanetary science. The instrument has been helpful in mapping planetary weather and characterizing super-Earth atmospheres, and has been a major tool in ruling out exoplanet false-positives, because an actual planet will present the same transit depth no matter the wavelength at which it is observed. After losing its coolant in 2009, the telescope, now dubbed ‘warm Spitzer,’ continues to provide key readings that are now enhanced with the development of the ‘peak up’ process.

Kepler-93 is a star of approximately 90 percent of the Sun’s mass and radius, located some 300 light years from Earth. With the Spitzer data corroborating the find and the use of asteroseismology to constrain the result, we wind up with an error bar that is just one percent of the radius of Kepler-93b. A planet thought to be 18,800 kilometers in diameter might be bigger or smaller than that by about 240 kilometers, but no more, an outstanding result for exoplanetary science and a confirmation of the power of asteroseismology in determining stellar radii.

Previous post: A Needle in the Cosmic Haystack: Formal and Empirical Approaches to Life in the Universe