Be aware of Open Source, a radio show on Boston’s WBUR that last week did a show about exoplanets and the possibility of extraterrestrial life. Earth 2.0 is available online, featuring David Latham (Harvard-Smithsonian Center for Astrophysics), Dimitar Sasselov (Harvard University), Jason Wright (Penn State) and Sarah Rugheimer (a PhD student at Harvard studying exoplanet atmospheres). The discussion ranges through the Kepler mission to the Fermi question and recent studies of exoplanet atmospheres, the latter particularly appropriate to today’s post.

For I want to talk today about ‘Hot Jupiters’ and their atmospheres, and what we can learn about planet formation by studying their composition. Hot Jupiters were a surprise when first discovered, but models of planetary migration seemed to explain them. We would expect a gas giant to form at or beyond the ‘snow line,’ where volatiles like water would form ice grains. As we saw in our discussion of Kepler-421b (see Transiting World at the Snow Line), planetary embryos that become gas giants should coalesce in this low temperature regime, with the resulting worlds richer in ice and water than the drier inner Solar System, which relies on volatile delivery by impacting comets or other objects with a formation history in the outer system.

Planetary migration is a way of getting those ‘hot Jupiters’ where they have been observed to be. We assume gravitational interactions with other young worlds that drive some gas giants into the inner system, taking a planet that has formed in the cold regions beyond the snow line into close proximity to the parent star. It would be reasonable to assume high water content in these worlds, but new work led by Nikku Madhusudhan (University of Cambridge, UK) comes up with a surprisingly different result.

Madhusudhan and team used near-infrared spectra of hot Jupiters observed by the Hubble Space Telescope, whose position in space allows accurate measurement of water in an exoplanetary atmosphere because it is far above contaminating water in the Earth’s own atmosphere. The method is transmission spectroscopy, in which some of the star’s light passes through the atmosphere of a planet in transit across its face as seen from Earth. The spectrum that results tells us much about the molecules in the atmosphere, but the researchers are finding only a small fraction of the water predicted by standard planet formation models.

“It basically opens a whole can of worms in planet formation. We expected all these planets to have lots of water in them. We have to revisit planet formation and migration models of giant planets, especially ‘hot Jupiters’, and investigate how they’re formed.” 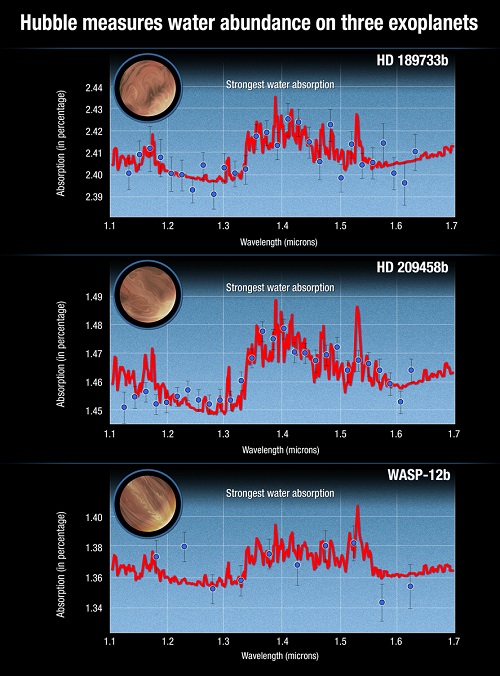 Image: This graph compares observations with modeled infrared spectra of three hot-Jupiter-class exoplanets that were spectroscopically observed with the Hubble Space Telescope. The red curve in each case is the best-fit model spectrum for the detection of water vapor absorption in the planetary atmosphere. The blue circles and error bars show the processed and analyzed data from Hubble’s spectroscopic observations. Credit: NASA, ESA, N. Madhusudhan (University of Cambridge), and A. Feild and G. Bacon (STScI).

The planets in question are HD 189733b, HD 209458b, and WASP-12b, with temperatures ranging from 800 to 2200 degrees Celsius. The water measurement of HD 209458b is the highest-precision measurement of any chemical compound in an exoplanet, and while it does find water, the low abundance creates problems for core accretion scenarios of planet formation beyond the snow line. Is our Solar System unusual in its high water content?

One thing to remember is that exoplanets are, in certain respects, easier for us to measure than some of the worlds in our own system. We know little about the constituents of the planetesimals that formed our own gas giants. The paper explains this seeming paradox while also pointing to an upcoming space mission that can help (internal references omitted for brevity):

Atmospheric elemental abundances of solar-system giant planets have led to important constraints on the origin of the solar system. The observed super-solar enrichments of C, S, N, and inert gases, support the formation of Jupiter by core accretion. However, the oxygen abundance of Jupiter is yet unknown. The upper atmosphere of Jupiter (P < 1 bar) has T < 200 K, causing water to condense and to be confined to the deepest layers (> 10 bar), requiring dedicated probes to measure it. The upcoming Juno mission to Jupiter aims to measure its O abundance, which is important to estimate the amount of water ice that was available in the planetesimals forming Jupiter and the rest of the solar system.

So Juno should be able to give us a better read on Jupiter’s oxygen, thus helping us better understand the kind of planetesimals that formed in our system’s earliest days. As to the measurements of exoplanets vs. planets closer to home:

The O/H and C/O ratios are easier to measure for hot giant exoplanets than they are for solar-system giant planets. The vast majority of extrasolar gas giants known have equilibrium temperatures of ~1000-3000 K, thus hosting gaseous H2O in their atmospheres accessible to spectroscopic observations.

HD 189733b, HD 209458b, and WASP-12b are good choices because they range widely in temperature, with HD 189733b being one of the ‘coolest’ hot Jupiters known, and Wasp 12b one of the hottest. On the matter of equilibrium temperature (Teq), I’m drawing on Sara Seager’s book Exoplanet Atmospheres: Physical Processes (Princeton, 2010), which explains that equilibrium temperature is the temperature attained by an isothermal planet after it has attained complete equilibrium with the radiation from the star it orbits. The Madhusudhan paper adds that these hot Jupiters have the best spectroscopic precision of all the hot Jupiters that have been observed using the transmission spectroscopy technique.

So we have high-quality results that have the researchers looking at various scenarios to explain low water abundances. The paper adds that the Galileo probe reported a low H20 abundance in Jupiter that was explained by saying the probe moved through an unusually dry region. But at least one alternative explanation came in a 2004 paper suggesting that Jupiter may have formed by planetesimals dominated by tar rather than water ice. The Madhusudhan results reawaken such questions and cause us to look anew at formation and migration models for all giant planets.