When I was a boy in ninth grade, I asked our science teacher whether the nearest star was likely to have planets. He loved the question because it gave him the chance to explain to the class that Alpha Centauri was a binary star (we left poor Proxima out of the discussion), and that as a binary, it couldn’t possibly have planets because their orbits would be too disrupted by gravitational effects to survive. That sounded reasonable to me, and I began putting my hopes on places like Tau Ceti and Epsilon Eridani, single stars with no disruptive companion.

Since then we’ve begun finding binary stars with planets and are learning about the diversity of exoplanetary systems, putting Alpha Centauri back into the game. A good thing, too, given the fact that binary stars are common, and keeping them in the planet hunt allows that many more chances to find an Earth 2.0, not to mention all the other interesting kinds of planets including ‘super-Earths’ that we’re locating. But the fact that binary systems can have planets doesn’t mean we can ignore the powerful effects two stars in the same system can have on the objects orbiting them.

Take the case of the interesting HK Tauri system, located some 450 light years from Earth in the constellation Taurus. Here we’re dealing with a young system, the two stars being between one and four million years old, the age range in which planet formation is believed to occur. Their separation is about 58 billion kilometers, which works out to 386 AU. Given the youth of the system, it’s not surprising to find protoplanetary disks here, one of them (HK Tauri B) edge-on and observable in visible or near-infrared wavelengths. The orientation of the disk helps to block the light of the central star, making observations at these wavelengths possible.

The other disk, around HK Tauri A, is best observed in millimeter-wavelength light because we do not see it edge-on and visible light observations are overpowered by the star’s light. Now we have new results from the Atacama Large Millimeter/submillimeter Array (ALMA), which draw on observations of the planet-forming disks in this system. A team led by Eric Jensen (Swarthmore College), able to measure the rotation of the HK Tauri A disk for the first time, has discovered that the two disks are mutually misaligned by at least 60 degrees. 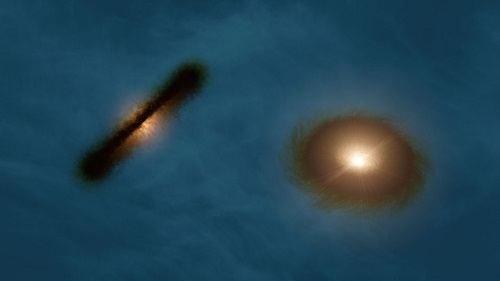 Image: This artist’s impression shows a striking pair of wildly misaligned planet-forming gas discs around both the young stars in the binary system HK Tauri. ALMA observations of this system have provided the clearest picture ever of protoplanetary discs in a double star. The new result demonstrates one possible way to explain why so many exoplanets — unlike the planets in the Solar System — came to have strange, eccentric or inclined orbits. Credit: R. Hurt (NASA/JPL-Caltech/IPAC).

What we’re seeing is that when stellar orbits and protoplanetary disks are not in the same plane, the planets under formation are likely to end up in eccentric, tilted orbits, with the gravitational effects of one star perturbing the disk of the other. Is the disk arrangement we find here a unique case or a common process around binary stars? A good deal of work lies ahead before we can answer that question, and not all oddball exoplanet orbits can be explained by this mechanism. But in at least this case, disk misalignment is a powerful indicator. Says Jensen:

“Our results show that the necessary conditions exist to modify planetary orbits and that these conditions are present at the time of planet formation, apparently due to the formation process of a binary star system. We can’t rule other theories out, but we can certainly rule in that a second star will do the job.” 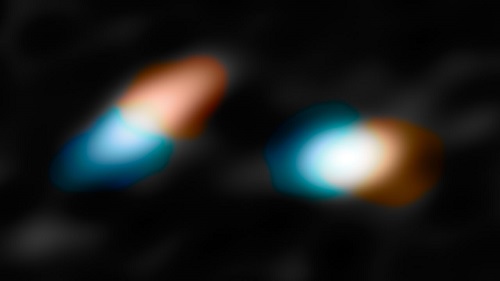 Image: This picture shows the key velocity data taken with ALMA that helped the astronomers determine that the discs in HK Tauri were misaligned. The red areas represent material moving away from Earth and the blue indicates material moving toward us. Credit: NASA/JPL-Caltech/R. Hurt (IPAC).

The paper on this work notes that the team’s findings are consistent with recent simulations of binary formation that predict such misalignments, especially in systems with separation greater than 100 AU, as we find here. Moreover, we may not always be aware of the companion responsible for a perturbed disk. From the paper:

While it remains to be seen how the protoplanetary disks in a statistical sample of young binary systems are oriented, it is suggestive that in the handful of systems where this measurement has been made, the misalignments are large. If this is a common outcome of the binary formation process, and especially if it extends to lower-mass binary companions (which may easily go undetected) as well, then perturbations by distant companions may account for many of the orbital properties that make the current sample of extrasolar planets so unlike our own solar system.

The paper is Jensen and Akeson, “Misaligned Protoplanetary Disks in a Young Binary System,” published online in Nature 31 July 2014 (abstract).

Next post: 101 Geysers on Enceladus (and What They Imply)