101 Geysers on Enceladus (and What They Imply)

I’ve mentioned before the irony that we may discover signs of robust extraterrestrial life sooner around a distant exoplanet than right here in our own Solar System. The scenario isn’t terribly implausible: Perhaps we come up empty on Mars, or find ourselves bogged down with ambiguous results. As our rovers dig, we still have Europa, Enceladus and other outer system possibilities, but probably face a wait of decades before we could build and fly the missions needed to identify life.

Meanwhile, the exoplanet hunt continues. While we’ve had many a setback — the Space Interferometry Mission will always stand out in this regard, not to mention the inability to follow through with Terrestrial Planet Finder, Darwin and other high-end concepts — it’s just possible that within the next few decades, a space-based observatory will detect a solid biosignature from an exoplanet’s atmosphere. Even the James Webb Space Telescope should be able to detect the transmission spectrum of an Earth-class planet transiting a dim red dwarf star. Future instruments will be able to take atmospheric characterization down to an Earth 2.0 around a Sun-like star.

Then again, maybe the outer Solar System will prove so enticing that we do decide to make it a priority. We could be seeing this happen right now. Every new piece of evidence from Cassini helps to build the case that Enceladus is an attractive proposition for the life search, the latest news being that the Saturn orbiter has identified 101 distinct geysers erupting on the moon’s surface. We first detected geysers of ice particles and water vapor at Enceladus’ south pole almost a decade ago. Now we have a map of geysers erupting from the so-called ‘tiger stripe’ fractures coincident with surface hot spots. 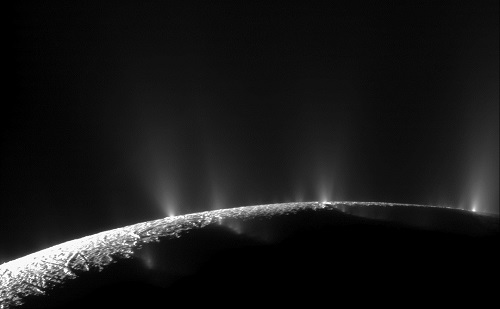 Image: This two-image mosaic is one of the highest resolution views acquired by Cassini during its imaging survey of the geyser basin capping the southern hemisphere of Saturn’s moon Enceladus. It clearly shows the curvilinear arrangement of geysers, erupting from the fractures. From left to right, the fractures are Alexandria, Cairo, Baghdad, and Damascus. As a result of this survey, 101 geysers were discovered: 100 have been located on one of the tiger stripes , and the three-dimensional configurations of 98 of these geysers have also been determined. The source location of the remaining geyser could not be definitively established. These results, together with those of other Cassini instruments, now strongly suggest that the geysers have their origins in the sea known to exist beneath the ice underlying the south polar terrain. Credit: NASA/JPL-Caltech/SSI.

The reason this is so exciting is that the hot spots that Cassini’s heat-sensing instruments found in the south polar region are only a few tens of meters across. That means they’re too small to be produced by the kind of frictional heating that would be caused by the repeated flexing of Enceladus due to tidal effects from Saturn. Frictional heating could have accounted for the geyser phenomena by turning surface ice into vapor and liquid, but it now appears that we’re dealing with water from the ocean below being exposed by opening and closing of the fractures.

Carolyn Porco (Space Science Institute) is leader of the Cassini imaging team, and lead author of a new paper on the Cassini findings:

“Once we had these results in hand we knew right away that heat was not causing the geysers but vice versa. It also told us the geysers are not a near-surface phenomenon but have much deeper roots.”

The source of the material forming the geysers of Enceladus is thus found to be the sea that exists under the ice shell, a sea that Cassini’s gravity data on the moon has confirmed. This news release from CICLOPS (Cassini Imaging Central Laboratory for Operations) has more, including the results of a second paper in which the authors report that the brightness of the combined geyser plume as viewed by Cassini changes periodically during the moon’s orbit of Saturn. In most respects, the brightness variations track the expected tidal venting cycle.

But not entirely. What would be expected from the opening and closing of the fractures does not predict when the plume begins to brighten, a finding that could implicate the spin rate of Enceladus. Francis Nimmo (UC-Santa Cruz) is lead author on the second paper:

“It’s an interesting puzzle. Possibilities for the mismatch include, among other effects, a delay in the response of the ice shell, which would suggest tides are heating the bulk of the ice at the south pole, or subtle changes in the spin rate of Enceladus.”

That last remark points to the possibility that the liquid water under the Enceladan ice may be global, even if deeper under the south pole region. So we have yet another reason for fascination with a moon whose salty sea, known to contain organic compounds, is spouting geysers and, possibly, reaching the surface on occasion as a liquid. We have a potentially habitable environment under the ice that periodically offers up samples to nearby spacecraft.

Enceladus is too good a target to resist, and it’s worth remembering mission concepts like Life Investigation for Enceladus (LIFE), developed by Peter Tsou. LIFE could launch in the early 2020s, reaching Saturn in 2030 with the help of gravity assists along the way, capturing material from the Enceladus geysers with an aerogel collector like the one NASA used in its Stardust comet mission. With a final gravity assist at Titan, LIFE would then bring its samples back to Earth in 2036.

I’m remembering, too, NASA astrobiologist Chris McKay’s exhortation that the venting of water and organics into space is ‘an open invitation to go there.’ The German Aerospace Center (DLR) has likewise been exploring Enceladus mission concepts, envisioning a lander that would drill through the ice. Enceladus Explorer would use an ice drill probe to melt its way into a water-bearing crevasse to look for microorganisms, on the theory that any life in the plumes would have been destroyed by sudden exposure to space. Thus the need to probe the ocean itself.

So the ideas for sampling Enceladus for life are out there and they’ll doubtless increase as Cassini continues to demonstrate how potent an astrobiological target this moon is. Which concept should we choose, and for that matter, which should we choose between Enceladus and Europa in terms of life-seeking mission destinations for spacecraft that can be flown in the near future? Both have legitimate claims on our attention, and the possibility of plumes on Europa itself (see Water Vapor Detected Above Europa) may change the equation. Will these enticing moons motivate us to reach them before a near-term space telescope finds the first biosignatures around an exoplanet?

The papers are Porco et al., “How the Geysers, Tidal Stresses, and Thermal Emission Across the South Polar Terrain of Enceladus are Related,” The Astronomical Journal Vol. 148, No. 3 (2014), 45 (abstract) and Nimmo et al., “Tidally Modulated Eruptions on Enceladus: Cassini ISS Observations and Models,” The Astronomical Journal Vol. 148, No. 3 (2014) 46 (abstract). On the LIFE mission, see Tsou et al., “LIFE: Life Investigation For Enceladus: A Sample Return Mission Concept in Search for Evidence of Life,” Astrobiology Vol. 2, No. 8 (September 12, 2012). Abstract available.