I’ve made no secret of my interest in red dwarf stars as possible hosts of life-bearing planets, and this is partially because these long-lived stars excite visions of civilizations that could have a stable environment for many billions of years. I admit it, the interest is science fictional, growing out of my imagination working on the possibility of life under the light of a class of stars that out-live all others. What might emerge in such settings, in places where tidal lock could keep the planet’s star fixed at one point in the sky and all shadows would be permanent?

Some of this interest grows out of an early reading of Olaf Stapledon’s 1937 novel Star Maker, in which the author describes life in the form of intelligent plants that live on such a tidally locked world. For that matter, Larry Niven developed an alien race called the Chirpsithra, natives of a red dwarf who have a yen for good drink and socializing with other species (you can sample Niven’s lively tales of these creatures in The Draco Tavern, a 2006 title from Tor). I tend to imagine red dwarf planet dwellers as something more like philosophers and sages than intelligent carrots or Niven’s incredibly tall barflies.

But no matter. A new paper from Christa Van Laerhoven and Rory Barnes (University of Washington) and Richard Greenberg (University of Arizona) has me absorbed in matters such as how close an Earth-class planet would need to be to stay habitable around a red dwarf. There’s no one answer because of the range of stellar temperatures between different types of red dwarf, but Laerhoven and company are looking at a star with a mass of 0.1 solar masses and a luminosity 1.15 x 10-3 times that of the Sun. Here it turns out that to receive the same incident flux as the Earth, the planet would need to orbit at 0.034 AU.

Now Mercury is about 0.38 AU from the Sun, which gives us a feel for how much cooler such a star must be. We can also note that because of their long lifetimes, many red dwarfs are much older than our Solar System, on the order of twice as old in some cases, and because a transiting Earth-class planet around such a star should be detectable (the transit depth would be huge), it’s possible that the first Earth-like habitable planet we find will be billions of years older than our own. Thus my visions of ancient races of philosophers under a darkened sky.

But maybe not. The Van Laerhoven paper makes the case that planets like these are going to be cooling internally as they age, enough so to cause problems. Plate tectonics are driven by heat, and we’re learning their necessary function in the carbon cycle that allows the planet to avoid greenhouse overheating. Here’s the issue (internal citations omitted):

On an Earth-like body, long before reaching twice Earth’s age, plate tectonics would probably have turned off as the planet cooled, primarily because solidification of the core would terminate the release of latent heat that drives mantle convection. While plate tectonics may not be essential for life on all habitable planets, an equivalent tectonic process to drive geochemical exchange between the interior and the atmosphere is a likely requirement. The necessary amount of internal heat for such activity is uncertain (even the mechanisms that govern the onset and demise of terrestrial plate tectonics are still poorly understood and controversial), but it seems likely that a planet ~10 Gyr would have cooled too much…

So my race of philosophers and poets may have a much shorter time to thrive than the ten trillion years its dim star will live. What we need is an additional heat source, and the possibility in play in this paper is tidal heating, which the paper argues calls for either non-synchronous rotation or an eccentric orbit. Even these are a problem because tidal effects gradually synchronize the rotation and circularize the orbit, but we need them to help us on geological timescales.

The solution may be another planet in the same system, an outer companion that can keep the inner planet’s orbit from circularizing and thus maintain the tidal stresses that heat the planet. The computer models the researchers used allow this effect to keep the inner world habitable for billions of years even when other internal sources of heat have long perished. The paper argues that this effect, while studied here only in terms of two-planet systems, can also come into play in systems with a larger number of planets. From the paper:

…a reasonable fraction of terrestrial-scale planets in the HZ of very old, low-mass stars may be able to sustain life, even though without a satisfactory companion they would have cooled off by now. The requirements on the outer planet are not extremely stringent. For example, one could well imagine a Neptune-size outer planet a few times farther out than the rocky planet with an orbital eccentricity ~0.01-0.02. Not only would such an outer planet yield an appropriate amount of tidal heating to allow life, but the heating would be at a steady rate for at least tens of Gyr. 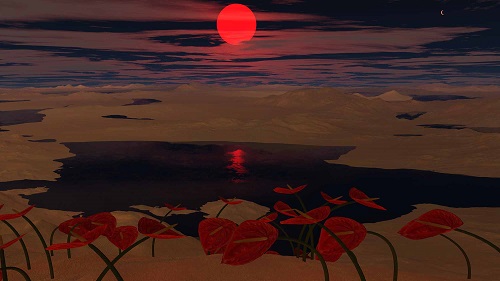 Image: For certain ancient planets orbiting smaller, older stars, the gravitational influence of an outer companion planet might generate enough energy through tidal heating to keep the closer-in world habitable even when its own internal fires burn out. But what would such a planet look like on its surface? Here, UW astronomer Rory Barnes provides a speculative illustration of a planet in the habitable zone of a red dwarf. “The star would appear about 10 times larger in the sky than our sun, and the crescent is not a moon but a nearby Saturn-sized planet that maintains the tidal heating,” Barnes notes. “The sky is mostly dark because cool stars don’t emit much blue light, so the atmosphere doesn’t scatter it.” Credit: Rory Barnes / University of Washington.

It could be, then, that a planet in this configuration — a terrestrial world like the Earth orbiting a 0.1 solar mass star with an outer companion — could experience enough tidal heating to make it the longest lived surface habitat in the galaxy. Is such a world, as the authors speculate, a possible home for humanity in the remote future, when our own Earth becomes uninhabitable? For that matter, given that such worlds seem made to order for ancient civilizations, shouldn’t we consider them as good SETI candidates? The paper recommends that any search for habitable Earth-scale planets should include a search for outer system companions.