Rosetta: Arrival at a Comet

How do you close on a comet? Very carefully, as the Rosetta spacecraft has periodically reminded us ever since late January, when it was awakened from hibernation and its various instruments reactivated in preparation for operations at comet 67P/Churyumov–Gerasimenko. The spacecraft carried out ten orbital correction maneuvers between May and early August as its velocity with respect to the comet was reduced from 775 meters per second down to 1 m/s, which is about as fast as I was moving moments ago on my just completed morning walk.

What a mission this is. When I wrote about the January de-hibernation procedures (see Waking Up Rosetta), I focused on two things of particular interest to the interstellar-minded. Rosetta’s Philae lander will attempt a landing on the comet this November even as the primary spacecraft, now orbiting 67P/Churyumov–Gerasimenko, continues its operations. We’re going to see the landscape of a comet as if we were standing on it, giving Hollywood special effects people legions of new ideas and scientists a chance to sample an ancient piece of the Solar System.

You’ll want to bookmark the Rosetta Blog to keep up. But keep in mind the other piece of the puzzle for future space operations. Rosetta will be looking closely at the interactions between the solar wind — that stream of charged particles constantly flowing from the Sun — and cometary gases. We’ll learn a great deal about the composition of the particles in the solar wind and probably get new insights into solar storms.

Remember that this ‘solar wind’ isn’t what drives the typical solar sail, which gets its kick from the momentum imparted by solar photons. But there are other kinds of sail. The Finnish researcher Pekka Janhunen has discussed electric sail possibilities, craft that might use the charged particles of the solar wind instead of photons to reach speeds of 100 kilometers per second (by contrast, Voyager 1 is moving at about 17 km/s). Rosetta results may help us understand how feasible this concept is. 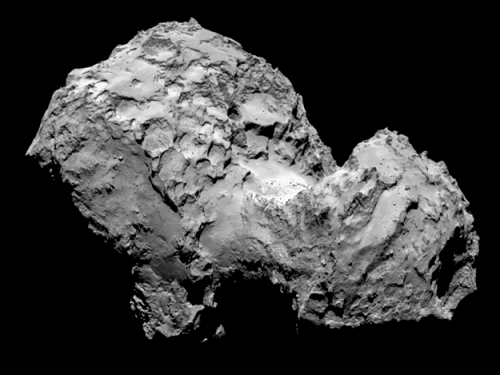 That image is a stunner, no? Now that Rosetta has rendezvoused with 67P/Churyumov-Gerasimenko, we can think back not only to the orbital correction maneuvers but the three gravity assist flybys of the Earth and one assist at Mars, allowing a trajectory that produced data about asteroids Steins and Lutetia along the way. It’s been a long haul since 2004 and you can see why Jean-Jacques Dordain, the European Space Agency’s director general, is delighted:

“After ten years, five months and four days travelling towards our destination, looping around the Sun five times and clocking up 6.4 billion kilometres, we are delighted to announce finally ‘we are here.’ Europe’s Rosetta is now the first spacecraft in history to rendezvous with a comet, a major highlight in exploring our origins. Discoveries can start.”

Getting the hang of operations around the comet is going to be a fascinating process to watch. Right now the spacecraft is approximately 100 kilometers from the comet’s surface, and over the course of the coming six weeks, while close-up studies from its instrument suite proceed, it will nudge closer, down to 50 kilometers, and eventually closer still depending on comet activity. Remember that images from the OSIRIS camera showed a dramatic variation in activity between late April and early June as the comet’s gas and dust envelope — its ‘coma’ — brightened and then dimmed within the course of six weeks. These are quirky, lively objects, and we now proceed to teach ourselves the art of flying a spacecraft near them for extended periods.

This ESA news release tells us that the plan is to identify five landing sites by late August, with the primary site being chosen in mid-September. The landing is currently planned for November 11, after which we’ll have both lander and orbiter in operation at the comet until its closest solar approach in August of 2015. Comets are ancient pieces of the Solar System that may well have delivered the bulk of Earth’s oceans. Now we’ll see up close what happens to a comet as it approaches the Sun. Congratulations and Champagne are due all around for the planners, designers, builders and controllers of this extraordinary mission. Onward to the surface.