Here’s an interesting notion: Put future radio telescopes like the Long Wavelength Array, now under construction in the American southwest, to work looking for exomoons. The rationale is straightforward and I’ll examine it in a minute, but a new paper advocating the idea homes in on two planets of unusual interest from the exomoon angle. Gliese 876b and Epsilon Eridani b are both nearby (15 light years and 10.5 light years respectively), both are gas giants, and both should offer a recognizable electromagnetic signature if indeed either of them has a moon.

The study in question comes out of the University of Texas at Arlington, where a research group led by Zdzislaw Musielak is looking at how large moons interact with a gas giant’s magnetosphere. The obvious local analogue is Io, Jupiter’s closest moon, whose upper atmosphere (presumably created by the active volcanic eruptions on the surface) encounters the charged plasma of the magnetosphere, creating current and radio emissions.

The researchers calls these “Io-controlled decametric emissions,” and they could be the key to an exomoon detection if we can find something similar around a nearby gas giant like those named above. Io’s atmosphere may be volcanic in origin, but we know from the example of Titan that moons in greatly different configurations can also have an atmosphere. The interactions with the magnetosphere are what is important. “We said, ‘What if this mechanism happens outside of our solar system?’” says Musielak. “Then, we did the calculations and they show that actually there are some star systems that if they have moons, it could be discovered in this way.” 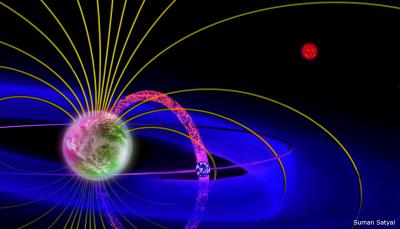 Image: Schematic of a plasma torus around an exoplanet, which is created by the ions injected from an exomoon’s ionosphere into the planet’s magnetosphere. Credit: UT Arlington.

We’ve often speculated about the habitability of a moon orbiting a gas giant, but neither of the planets named above, Gliese 876b and Epsilon Eridani b, is within the habitable zone of its respective star. The former has a semimajor axis of 0.208 AU, beyond the HZ outer edge for this M4V-class red dwarf. Epsilon Eridani b is likewise a gas giant (about 1.5 times Jupiter mass) with an orbital distance of approximately 3.4 AU, again outside the K2V primary’s habitable zone. So early work on these two planets would not be related to the habitability question but would serve as a useful test of our ability to detect exomoons using electromagnetic interactions.

I wrote David Kipping (Harvard-Smithsonian Center for Astrophysics) this morning to ask for his reaction to the electromagnetic approach to exomoon detection. Kipping heads The Hunt for Exomoons with Kepler, which uses techniques involving planetary transits and the signature of exomoons within. He called this work “…an inventive idea which could discover exomoons not detectable with any other technique,” and went on to point out just where electromagnetic methods might be the most effective.

Magnetospheres are more extended for gas giants on wide orbits, like Jupiter. So I would expect this technique to be most fruitful for cold Jupiters, whereas the transit technique is better suited for planets at the habitable-zone distance or closer. The complementary nature of these detection techniques will allow us to find moons around planets at a range of orbital separations.

Adding more tools to our inventory can only help as we proceed in our search for the first exomoon. Let me quote Kipping’s further thoughts on the method:

In order to make a detection with this method, the moon must possess an ionosphere and so some kind of atmosphere. Io has a tenuous atmosphere because of intense tidal friction leading to volcanism and subsequent sulphur dioxide outgassing, but we don’t really know how common such a scenario is. Alternatively, a moon may be able to retain an atmosphere much like the Earth does, but in the Solar System only Titan satisfies this criteria.

The host planet must have a strong magnetosphere. For Jupiter-sized planets, this is reasonable but Neptunes and mini-Neptunes dominate the planet census and if such objects have moons, their magnetospheres are unlikely to be strong enough to produce an observable radio signal via interaction with a moon’s ionosphere.

For these reasons, an absence of a radio signal would not necessarily mean that there were no moons, unlike the transit technique which can make more definitive statements.

The technique is most useful for nearby planetary systems, within a few parsecs, but then again these are likely the most interesting systems to explore!

Unlike the transit method, this technique does not require the orbital inclination of the planetary system to be nearly aligned to our line of sight – a significant advantage.

This new exomoon work reminds me of Jonathan Nichols’ thinking on radio telescopes and exoplanet detection. An astronomer at the University of Leicester, Nichols proposed at a Royal Astronomical Society meeting in 2011 that a radio telescope like the Low Frequency Array (LOFAR), now under construction across France, Sweden, the Netherlands, Great Britain and Germany, could detect the radio waves generated by the aurorae of gas giants, emissions that we can detect from Jupiter and Saturn in our own system. Nichols believes we might use such methods to find planets up to 150 light years away. See Exoplanet Aurora as Detection Tool for more.