What Io Can Teach Us

Io doesn’t come into play very much on Centauri Dreams, probably because of the high astrobiological interest in the other Galilean satellites of Jupiter — Europa, Callisto and Ganymede — each of which may have an internal ocean and one, Europa, a surface that occasionally releases material from below. Io seems like a volcanic hell, as indeed it is, but we saw yesterday that its intense geological activity produces interactions with Jupiter’s powerful magnetosphere, leading to radio emissions that might be a marker for exomoon detection.

The exoplanet hunt has diverse tools to work with, from the transits that result from chance planetary alignments to radial velocity methods that measure the motion of a host star in response to objects around it. Neither is as effective at planets in the outer parts of a solar system as we’d like, so we turn to direct imaging for large outer objects and sometimes luck out with gravitational microlensing, finding a planetary signature in the occultation of a distant star. All these methods work together in fleshing out our knowledge of exoplanets, and it will be helpful indeed if electromagnetic detection is a second way beyond transits of looking for an exomoon.

That first exomoon detection will be a major event. But in studying Io’s interactions with Jupiter, the paper from Zdzislaw Musielak’s team at the University of Texas at Arlington (see yesterday’s post) leaves open the question of just how common such moons are, and of course we don’t know the answer, other than to say that we do have the example of Titan as a large moon with a thick, stable atmosphere. Clearly Io rewards study in and of itself, and its recent intense activity reminds us what can happen to an object this close to a gas giant’s enormous gravity well. With Musielak’s work in mind, then, lets have a run at recent Io findings.

What we learn from Imke de Pater (UC-Berkeley) and colleagues is that a year ago, Io went through a two-week period of massive volcanic eruptions sending material hundreds of kilometers above the surface, a pattern that may be more common than we once thought. Io is small enough (about 3700 kilometers across) that hot lava rises high above the surface, and in the case of the most recent events, pelted hundreds of square kilometers with molten slag.

“These new events are in a relatively rare class of eruptions on Io because of their size and astonishingly high thermal emission. The amount of energy being emitted by these eruptions implies lava fountains gushing out of fissures at a very large volume per second, forming lava flows that quickly spread over the surface of Io.” 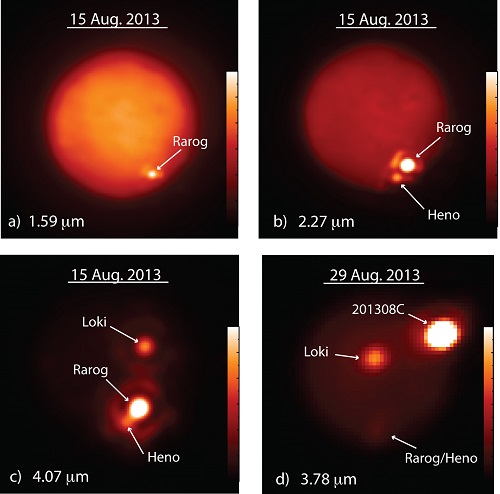 Image: Images of Io obtained at different infrared wavelengths (in microns, μm, or millionths of a meter) with the W. M. Keck Observatory’s 10-meter Keck II telescope on Aug. 15, 2013 (a-c) and the Gemini North telescope on Aug. 29, 2013 (d). The bar on the right of each image indicates the intensity of the infrared emission. Note that emissions from the large volcanic outbursts on Aug. 15 at Rarog and Heno Paterae have substantially faded by Aug. 29. A second bright spot is visible to the north of the Rarog and Heno eruptions in c and to the west of the outburst in d. This hot spot was identified as Loki Patera, a lava lake that appeared to be particularly active at the same time. Image by Imke de Pater and Katherine de Kleer, UC Berkeley.

De Pater discovered the first two outbursts on August 15, 2013, with the brightest at a caldera called Rarog Patera. The other occurred at the Heno Patera caldera (a caldera is not so much a crater but the collapse of surface after a volcanic eruption, leaving a large, bowl-shaped depression with surrounding scarps). The Rarog Patera event produced, according to observations conducted at the Keck II instrument in Hawaii, a 9-meter thick lava flow, one that covered 80 square kilometers. The Heno Patera flow covered almost 200 square kilometers.

But the main event was on August 29, revealed in observations led by Berkeley grad student Katherine de Kleer at the Gemini North telescope on Mauna Kea and the nearby Infrared Telescope Facility (IRTF). The actual thermal source of the eruption had an area of 50 square kilometers in an event apparently dominated by lava fountains. Usefully, the de Pater team tracked the third outburst for almost two weeks, providing data that will help us understand how such volcanic activity influences Io’s atmosphere. That, in turn, will give us insights into how eruptions support the torus of ionized gas that circles Jupiter in the region of Io’s orbit. 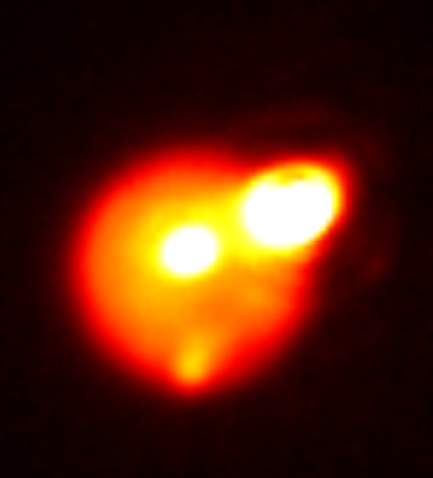 Image: The Aug. 29, 2013, outburst on Io was among the largest ever observed on the most volcanically active body in the solar system. Infrared image taken by Gemini North telescope, courtesy of Katherine de Kleer, UC Berkeley.

Here again we have helpful synergies between different tools, in this case the Japanese HISAKI (SPRINT-A) spacecraft, whose own observations of the Io plasma torus supplement what de Kleer observed in Hawaii. The correlation of the data sets may provide new insights into the process and, if Musielak’s methods at exomoon detection pay off through future radio observations, may help us interpret those results. The gravitational tugs of Jupiter, Europa and Ganymede feed Io’s volcanic activity, surely a scenario that is repeated around gas giants elsewhere. If so, the Io ‘laboratory’ will turn out to have surprising exomoon implications.