Magnetic sails — ‘magsails’ — are a relative newcomer on the interstellar propulsion scene, having been first analyzed by Dana Andrews and Robert Zubrin in 1988. We saw that the particle beam concept advanced by Alan Mole and discussed this week by Jim Benford would use a magsail in which the payload and spacecraft were encircled by a superconducting loop 270 meters in diameter. The idea is to use the magnetic field to interact with the particle beam fired from an installation in the Solar System toward the departing interstellar craft.

Within our own system, we can also take advantage of the solar wind, the plasma stream flowing outward from the Sun at velocities as high as 600 kilometers per second. A spacecraft attempting to catch this wind runs into the problem that sunlight contains far more momentum, which means a magnetic sail has to deflect a lot more of the solar wind than a solar sail needs to deflect sunlight. A physical sail, though, is more massive than a spacecraft whose ‘sail’ is actually a magnetic field, so the magsail spacecraft can be the less massive of the two.

Science fiction began exploring basic solar sails in the 1960s through stories like Clarke’s “Sunjammer” and Cordwainer Smith’s “The Lady Who Sailed the Soul.” In fact, SF writers have done an excellent job in acquainting the public with how solar sails would operate and what their capabilities might be. But magsails are hard to find in science fiction, and the only novel that springs readily to mind is Michael Flynn’s The Wreck of the River of Stars, whose haunting title refers to a magsail passenger liner at the end of its lifetime.

They called her The River of Stars and she spread her superconducting sails to the solar wind in 2051. She must have made a glorious sight then: her fuselage new and gleaming, her sails shimmering in a rainbow aurora, her white-gloved crew sharply creased in black-and-silver uniforms, her passengers rich and deliciously decadent. There were morphy stars and jeweled matriarchs, sports heroes and prostitutes, gangsters and geeks and soi-disant royalty. Those were the glamour years, when magsails ruled the skies, and The River of Stars was the grandest and most glorious of that beautiful fleet. 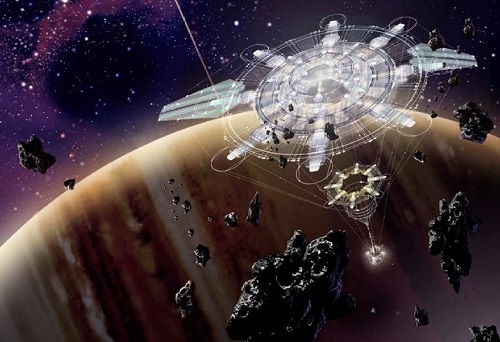 Image: There are few science fiction stories involving magsails, and even fewer visual depictions. The cover art for Michael Flynn’s book, by the artist Stephan Martiniere, is a striking exception.

The novel takes place, though, many years later, when the grand passenger liner has become no more than an obsolete freighter whose superconducting sail structure has been decommissioned in favor of newly developed fusion drives. What happens when she needs to power up the sail again because of a fusion emergency makes up the bulk of the tale. The Wreck of the River of Stars is not about an interstellar journey but a highly developed infrastructure within the Solar System that, for a time, used the solar wind. It will be interesting to see what science fiction tales grow out of the current interstellar thinking.

For magsails emerged in an interstellar context, and if it was Robert Zubrin and Dana Andrews who worked through the equations of what we conceive today as a magsail, it was Robert Bussard who first brought life to the idea through his notion of an interstellar ramjet that would use magnetic fields to scoop up fuel between the stars. Both Zubrin and Andrews saw the potential uses of a magsail for deceleration against a stellar wind. If beam dispersal cannot be prevented to allow an interstellar magsail to be accelerated by particle beam, we might still consider equipping a beamed laser sailcraft with magsail capabilities for use upon arrival.

And when it comes to magsails closer to home, one cautionary note is provided by a 1994 paper from the Italian physicist Giovanni Vulpetti, who describes the problems we may have operating superconductors within the orbit of Mars. The paper notes that superconductivity can be lost this close to the Sun unless massive thermal shielding is applied and that, of course, ramps up the spacecraft mass. This evidently does not preclude outer system work, but it could serve as a brake on using magsails near the Earth, at least until we make considerable advances in superconductor technology.

The Vulpetti paper is “A Critical Review on the Viability of Space Propulsion Based on the Solar Wind Momentum Flux,” Acta Astronautica 37 (1994), 641-642.