For those of you who, like me, are fascinated with red dwarf stars and the prospects for life around them, I want to mention David Stevenson’s Under a Crimson Sun (Springer, 2013), with the caveat that although it’s on my reading list, I haven’t gotten to it yet. More about this title after I’ve gone through it, but for now, notice that the interesting planet news around stars like Gliese 581 and GJ 667C is catching the eye of publishers and awakening interest in the public. It’s easy to see why. Planets in the habitable zone of such stars would be exotic places, far different from Earth, but possibly bearing life.

At the same time, we’re learning a good deal more about both the above-mentioned stars. A new paper by Paul Robertson and Suvrath Mahadevan (both at Pennsylvania State) looks at GJ 667C with encouraging — and cautionary — results. The encouraging news is that GJ 667Cc, a super-Earth in the habitable zone of the star, is confirmed by their work. The cautionary note is that stellar activity can mimic signals that we can interpret, wrongly, as exoplanets, and not every planet thought to be in this system may actually be there. 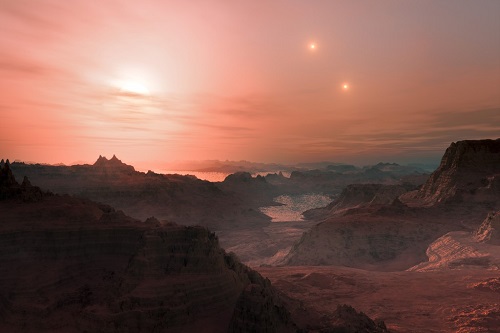 Image: The view from GJ 667Cc as presented in an artist’s impression. Note the distant binary to the right of the parent red dwarf. New work confirms the existence of this interesting world in the habitable zone. Credit: ESO/L. Calçada.

Remember that this is a system that was originally thought to have two super-Earths: GJ 667Cb and GJ 667Cc. The complicated designation is forced by the fact that the red dwarf in question, GJ 667C, is part of a triple star system, a distant companion to the binary pair GJ 667AB. It was just last year that the first two planets around GJ 667C were announced, followed by results from a different team showing five more super-Earths around the same star. See Gliese 667C: Three Habitable Zone Planets for my discussion of the apparent result, which at the time seemed spectacular.

The new paper from Robertson and Mahadevan takes a critical look at this system, examining the amount of stellar activity found in the host star and finding ways to study the average width of the star’s spectral absorption lines, which should flag changes to the spectrum being produced by magnetic features like starspots. Using these methods the team was able to remove the stellar activity component from the observed signals, allowing the signature of the real planets to remain while suggesting problems with the other candidates.

GJ 667Cc survives the test, a happy outcome for those interested in the astrobiological prospects here. GJ 667Cb also makes the cut, but Robertson and Mahadevan believe that planet d in this system, originally thought to be near the outer edge of the habitable zone, is a false positive created by stellar activity and the rotation of the star. As for the other planet candidates in this system, Paul Robertson has this to say in an online post:

The signals associated with them are so small that they cannot be seen with “industry-standard” analysis techniques, regardless of whether we have corrected for activity. However, considering how successful our activity correction has been at boosting the signals of real planets, the fact that we see no sign of any of these planet candidates after the activity correction leads us to strongly doubt their existence.

All of this should remind us not to jump too swiftly to conclusions about planet candidates, particularly given the sensitivity involved with the spectrographs used in our planet-finding work. Radial velocity data that looks strong can actually be the result of magnetic events on the surface of the star being observed. When Robertson and Mahadevan looked at Gliese 581, another highly interesting system because of planets possibly in the habitable zone, they found no sign of Gliese 581g, a controversial candidate whose existence is still being debated. In Gliese 581 and the Stellar Activity Problem, Robertson has this to say:

With an orbital period of 33 days, the controversial “planet g” also lies at an integer ratio of the stellar rotation period. Sure enough, no sign of g remains after our activity correction, revealing that it too was an artifact of magnetic activity. While this outcome is certainly disappointing for anyone hoping to find signs of life in the GJ 581 system, it is heartening to finally put the confusion and dispute surrounding this system to rest.

Moreover, another candidate potentially in the habitable zone, Gl 581d, falls back into the measurement noise, meaning that it was another signature of stellar activity rather than an actual planet. The red dwarf Gliese 581 is thus reduced to three planets in its system, and we’ve lost the best candidates for life. That may sound discouraging, but I think we can take heart from the fact that work like this shows we’re getting much better at eliminating false positives. Using these methods, real planets stand out in the data, which means we can more readily identify habitable zone planets as our spectrographic instrumentation improves.

The paper is Robertson and Mahadevan, “Disentangling Planets and Stellar Activity for Gliese 667C,” accepted for publication at Astrophysical Journal Letters (preprint). For Gliese 581, see Robertson and Mahadevan, “Stellar Activity Masquerading as Planets in the Habitable Zone of the M dwarf Gliese 581,” published in Science Express (3 July 2014).

Next post: Laniakea: Milky Way’s Address in the Cosmos