Binary Stars: The Likelihood of Planets

(Gollancz, 1990), a robotic probe called AXIS (Automated eXplorer of Interstellar Space) has used antimatter propulsion to make a fifteen-year crossing to Alpha Centauri. The world’s various networks of the future begin to feast on reports of what it finds, like this one:

“In the past few weeks, AXIS has returned images of three planets circling Alpha Centauri B. As yet these worlds have not been named, and are called only B-1, B-2, and B-3. B-3 was already known to moonbased astronomers; it is a huge gas giant some ten times larger than Jupiter in our own solar system. Like Saturn, it is surrounded by a thin rugged ring of icy moonlets. B-1 is a barren rock hugging close to Alpha Centauri B, similar to Mercury. But the focus of our attention is now on B-2, a justright world slightly smaller than Earth. B-2 possesses an atmosphere closely approximating Earth’s, as well as continents and oceans of liquid water. It is orbited by two moons each about a thousand kilometers in diameter.”

It’s a tale that is only partially devoted to interstellar matters, but those with an interest in artificial intelligence of a high order indeed and its possibilities in future probes will want to become familiar with it. As you can see, Bear’s guess about Centauri Bb is about right, at least based on what little we know about the candidate world located in a scorching inner orbit. We can rule out the gas giant based on subsequent work which has whittled down the possibilities for large worlds, but we do have the region within 2 AU in which to hope for a stable orbit for another planet (outside of that, planetary orbits according to our simulations are quickly disrupted).

Are we likely to find another Alpha Centauri planet, a hypothetical Centauri Bc? We can certainly hope so, but while we await the lengthy period of data acquisition and analysis that may tell us, we can look at recent work from Elliott Horch (Southern Connecticut State) and team, which has shown, using Kepler data, that 40% to 50% of host stars for exoplanets are binary stars. Says Horch: “It’s interesting and exciting that exoplanet systems with stellar companions turn out to be much more common than was believed even just a few years ago.” 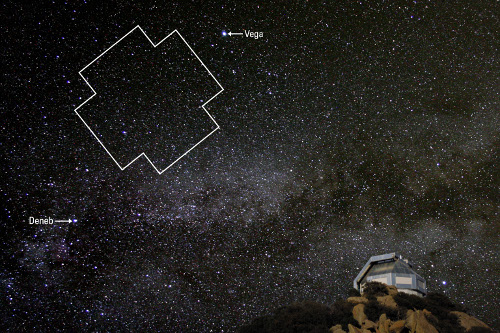 Image: The Kepler field of view, located between two bright stars in the summer triangle, rising over the WIYN telescope in southern Arizona. Credit: NOAO.

Indeed, there was a time not all that long ago when the idea of planets around multiple star systems was considered unlikely because of the gravitational disruptions such systems — at least relatively close binaries — would experience. But a number of studies since the 1990s have demonstrated stable orbits even in systems as close as Alpha Centauri, where the separation between Centauri A and B closes from 40 AU down to a tight 11 AU. That 2 AU of breathing room I mentioned above re Centauri B gives us a planet possibility perhaps as far out as the asteroid belt in our own system if we throw in a fudge factor, but not much further.

As to the work of Horch and company, the researchers used speckle imaging using data from the WIYN telescope located on Kitt Peak in southern Arizona and the Gemini North telescope (Mauna Kea) to look at targets at a rate of 15 to 25 times per second. The resolution achieved through this method, combining the images with suitable algorithms, can detect companion stars that are as much as 125 times as faint as the target star and only 0.05 arcseconds away. The occurrence rate of binaries in this work yields the high percentage of exoplanet host stars that turn out to be binaries, or at least appear to be. From the paper:

After a distance-limited subsample of these objects is constructed, the known statistics concerning binarity among stars near the Sun is added. The simulations predict that the very large majority of sub-arcsecond companions will be physically bound to the Kepler star.

The needed simulations are there to rule out objects that may only be in line of sight with the Kepler Object of Interest star being studied. As this National Optical Astronomy Observatory news release explains, the simulation relies on known statistical properties of binary star systems and line of sight ‘companions.’ Continuing from the paper:

This result suggests that, over the separation range to which we are sensitive, exoplanet host stars have a binary fraction consistent with that of field stars. Our speckle imaging program has identified a sample of candidate binary-star exoplanet systems in which only a modest number of false positives are likely to exist.

Thus the large majority of stellar companions revealed around KOI stars turn out to be actual companion stars rather than line of sight stars not connected with the system. And because we are talking about companion stars with separations between several AU out to no more than 100 AU, we may not always be sure around which star a given planet orbits. Now that binaries are thought to account for about half of known stars, these results suggest that the presence of the companion star does not not adversely affect the formation of planets.