Evidence for Plate Tectonics on Europa

It was the Galileo mission, which ended in 2003 when the probe descended into the depths of Jupiter’s atmosphere, that brought us the first solid evidence of an ocean beneath the ice of Europa. Galileo made multiple flybys of the Jovian moon, the first spacecraft to do so, with the closest pass being a scant 180 kilometers on October 15, 2001. As you would imagine, the radiation environment near Europa is hazardous, which is why the flybys were reserved for Galileo’s extended mission. We’ve been mining the Galileo data on Europa ever since.

You may remember that Galileo was unable to open its high-gain antenna on the way to Jupiter, so we had to rely on the ingenuity of mission controllers to get the maximum performance out of the low-gain antenna. That 70 percent of the mission’s science goals were still met, and that we are making new discoveries with the Galileo data today, still amazes me. Now we have new work on Europa that flags the evidence for plate tectonics on the distant moon, which would be the first sign of such activity on any world other than our own.

Simon Kattenhorn (University of Idaho) and Louise Prockter (Johns Hopkins University Applied Physics Laboratory) led this work, which offers visual evidence of the expansion of Europa’s icy crust. A look at Europa’s cracked and ridged surface as sent back by Galileo calls into question how the terrain formed, because while new crust is visible, the mechanism for destroying older crust is not apparent. Kattenhorn and Prockter suggest that this ‘missing terrain’ was absorbed into Europa’s ice shell rather than breaking through it into the ocean that lies beneath. But the evidence for plate tectonics is compelling, and the thickness of the ice shell remains controversial. 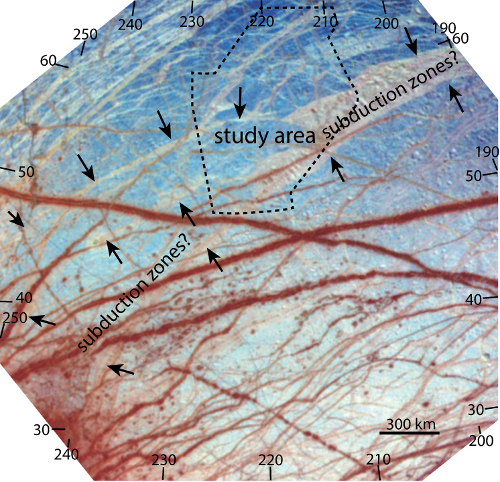 Image: Scientists have found evidence of plate tectonics on Jupiter’s moon Europa. This false-color image of the trailing northern hemisphere on Jupiter’s moon Europa — the hemisphere that faces away from Jupiter — shows numerous ridges (red) and band (light-colored) features. Subduction zones — regions where two tectonic plates converge and one is forced beneath the other — may also be present in the study area and are identified by arrows. Image credit: NASA/JPL/University of Arizona.

Plate tectonics describes the motion of large plates in the Earth’s outermost shell, causing earthquakes and volcanic activity as well as mountain-building and the formation of trenches in the oceans as the plates meet. Subduction can carry plate material back into the mantle, while new crust can emerge from seafloor spreading. On Europa’s surface, the break up of crustal material and its replacement by bands of fresh ice from below is apparent. The new material fills in broad bands that are kilometers wide. Kattenhorn and Prockter reconstructed what areas of the surface would have looked like before these disruptions occurred.

Just where was the old crust being destroyed so that the new crust could form? When the researchers looked at areas where subduction similar to Earth’s might be occurring on Europa, they found ice volcanoes on the overriding plate. The smoothness of the surface in these areas implied that older material was forced below rather than remaining as crumpled mountainous terrain on the surface. So now we have evidence not only of material moving up through the ice crust but a mechanism for moving surface material back into the shell.

Simon Kattenhorn comments on the significance of the finding:

“Europa may be more Earth-like than we imagined, if it has a global plate tectonic system. Not only does this discovery make it one of the most geologically interesting bodies in the solar system, it also implies two-way communication between the exterior and interior — a way to move material from the surface into the ocean — a process which has significant implications for Europa’s potential as a habitable world.” 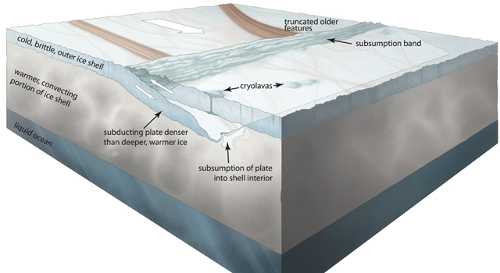 Image: Scientists have found evidence of plate tectonics on Jupiter’s moon Europa. This conceptual illustration of the subduction process (where one plate is forced under another) shows how a cold, brittle, outer portion of Europa’s 20–30 kilometer (roughly 10–20 mile) thick ice shell moved into the warmer shell interior and was ultimately subsumed. A low-relief subsumption band was created at the surface in the overriding plate, alongside which cryolavas may have erupted. Image credit: Noah Kroese, I.NK.

Bear in mind the reason for Galileo’s fiery plunge into the Jovian atmosphere. The spacecraft, its systems degrading in the high-radiation environment, its fuel largely spent, was crashed into the giant planet so that there would be no possibility it might contaminate Europa at some point in the future with bacteria from Earth. Europa remains a target of high astrobiological interest, and preventing even the faintest possibility of contamination kept this fascinating moon pristine. We now ponder what kinds of equipment it might take to explore near-Europa space and the surface itself in hopes of finding evidence of life from below.