Emergence of the ‘Venus Zone’

In terms of habitability, it’s clear that getting a world too close to its star spells trouble. In the case of Gliese 581c, we had a planet that some thought would allow liquid water at the surface, but subsequent work tells us it’s simply too hot for life as we know it. With the recent dismissal of Gl 581d and g (see Red Dwarf Planets: Weeding Out the False Positives), that leaves no habitable zone worlds that we know about in this otherwise interesting red dwarf system.

I’m glad to see that Stephen Kane (San Francisco State) and his team of researchers are working on the matter of distinguishing an Earth-like world from one that is more like Venus. We’ve made so much of the quest to find something roughly the same size as the Earth that we haven’t always been clear to the general public about what that implies. For Venus is Earth-like in terms of size, but it’s clearly a far cry from Earth in terms of conditions.

Indeed, you would be hard-pressed to find a more hellish place than Venus’ surface. Kane wants to understand where the dividing line is between two planetary outcomes that could not be more different. Says the scientist:

“We believe the Earth and Venus had similar starts in terms of their atmospheric evolution. Something changed at one point, and the obvious difference between the two is proximity to the Sun.”

Kane and company’s paper on this will appear in Astrophysical Journal Letters and is already available on the arXiv server (citation below). At stake here is solar flux, the incoming energy from the planet’s star, which can be used to define an inner and an outer edge to what Kane calls the ‘Venus Zone.’ Venus is 25 percent closer to the Sun than the Earth, but it gets twice the amount of solar flux. Get close enough to the star to trigger runaway greenhouse effects — the results of which make Venus the distinctive nightmare at the surface that it is — and you are at the outer edge of the Venus Zone.

Go further in toward the star and you can pick out the point where a planet’s atmosphere would begin to be eroded by the incoming flux. This is the inner edge of the Venus Zone, and by understanding the boundaries here, we are helping future attempts to characterize Earth-sized worlds in the inner systems of their stars. Find an Earth-sized planet in the Venus Zone and there is reason to suspect that a runaway greenhouse gas effect is in play. 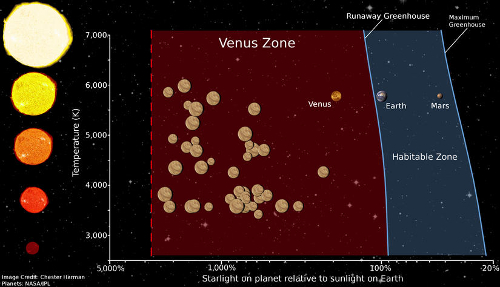 Image: This graphic shows the location of the “Venus Zone,” the area around a star in which a planet is likely to exhibit atmospheric and surface conditions similar to the planet Venus. Credit: Chester Harman, Pennsylvania State University.

The broader picture is an attempt to place our Solar System in context. The Kepler results have consistently demonstrated that any thought of our Solar System being a kind of template for what a system should look like must be abandoned. From the paper:

A critical question that exoplanet searches are attempting to answer is: how common are the various elements that we find within our own Solar System? This includes the determination of Jupiter analogs since the giant planet has undoubtedly played a significant role in the formation and evolution of our Solar System. When considering the terrestrial planets, the attention often turns to atmospheric composition and prospects of habitability. In this context, the size degeneracy of Earth with its sister planet Venus cannot be ignored and the incident flux must be carefully considered.

The study identifies 43 potential Venus analogs from the Kepler data, with occurrence rates similar to those for Earth-class planets, though as the paper notes, with smaller uncertainties. After all, Kepler is more likely to detect shorter-period planets in the Venus Zone than Earth-class planets with longer orbital periods. Overall, the team estimates based on Kepler data that approximately 32% of small low-mass stars have terrestrial planets that are potentially like Venus, while for G-class stars like the Sun, the figure reaches 45%.

Kane notes that future missions will be challenged by the need to distinguish between the Venus and Earth model. We’ll also be looking at the question of carbon in a planet’s atmosphere and its effects on the boundaries of the Venus Zone, the assumption being that more carbon in the atmosphere would push the outer boundary further from the star.

The paper is Kane, Kopparapu and Domagal-Goldman, “On the frequency of potential Venus analogs from Kepler data,” accepted for publication in The Astrophysical Journal Letters and available as a preprint. Be aware as well of the team’s Habitable Zone Gallery, which currently identifies 51 planets as likely being within their star’s habitable zone.