Hard to believe that it’s been ten years for Cassini, but it was all the way back in January of 2005 that the Huygens probe landed on Titan, an event that will be forever bright in my memory. Although the fourth space probe to visit Saturn, Cassini became in 2004 the first to orbit the ringed planet, and since then, the mission has explored Titan’s hydrocarbon lakes, probed the geyser activity on Enceladus, tracked the mammoth hurricane at Saturn’s north pole, and firmed up the possibility of subsurface oceans on both Titan and Enceladus.

I mentioned the Galileo probe last week, its work at Europa and its fiery plunge into Jupiter’s atmosphere to conclude the mission. Cassini has a similar fate in store after finishing its Northern Solstice Mission, which will explore the region between the rings and the planet. As discussed at the recent European Planetary Science Congress in Cascais, Portugal, the spacecraft’s final orbit will occur in September of 2017, taking Cassini to a mere 3000 kilometers above the planet on closest approach. A final Titan encounter will then provide the gravitational muscle to hurl the craft into Saturn’s atmosphere, where it will be vaporized.

But of course we’re not quite through with Cassini yet. New work out of the SETI Institute delves into the creation and destruction of moons on extremely short time-scales within the Saturnian ring system. Robert French, Mark Showalter and team accomplished their studies by comparing the exquisite photographs Cassini has produced with pictures made during the Voyager mission. The upshot: The F ring has taken on a completely new look.

“The F ring is a narrow, lumpy feature made entirely of water ice that lies just outside the broad, luminous rings A, B, and C,” notes French. “It has bright spots. But it has fundamentally changed its appearance since the time of Voyager. Today, there are fewer of the very bright lumps. We believe the most luminous knots occur when tiny moons, no bigger than a large mountain, collide with the densest part of the ring. These moons are small enough to coalesce and then break apart in short order.”

Short order indeed. It appears that the bright spots can appear and disappear in the course of mere days and even hours. Explaining the phenomenon is the nature of the F ring itself, which is at the critical point known as the Roche limit. This is the range within which the gravitational pull on a moon’s near side can differ enough from that on its far side to actually tear the moon apart. What we seem to be seeing is moon formation — objects no more than 5 kilometers in size — quickly followed by gravitationally induced breakup. 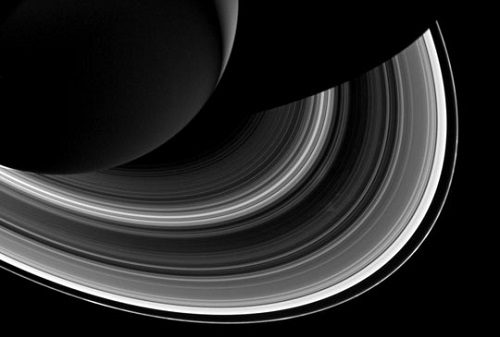 Image: Cassini spied just as many regular, faint clumps in Saturn’s narrow F ring (the outermost, thin ring), like those pictured here, as Voyager did. But it saw hardly any of the long, bright clumps that were common in Voyager images. Credit: NASA/JPL-Caltech/SSI

Mark Showalter compares these small moons to bumper cars that careen through moon-forming material, taking form and then fragmenting as they go. Adding to the chaos is the moon Prometheus, a 100-kilometer object that orbits just within the F ring. Alignments of this moon that occur every 17 years produce a further gravitational influence that helps to launch the formation of the tiny moonlets and propel them through their brief lives. Prometheus, then, should cause a periodic waxing and waning of the clumps of moon activity.

Further work with the Cassini data should help the researchers firm up this theory, for the Prometheus influence should cause an increase in the clumping and breakup activity within the next few years. Cassini has a sufficient lifetime to test that prediction. What adds further interest to the story is the fact that we’re seeing in miniature some of the elementary processes that, 4.6 billion years ago, led to the formation of the Solar System’s planets. Consider Saturn’s F ring, then, a laboratory for processes we’d like to learn much more about as we turn our instruments to young stars and the planets coalescing around them.

The paper is French et al., “Analysis of clumps in Saturn’s F ring from Voyager and Cassini,” published online in Icarus on July 15, 2014 (abstract). This news release from the SETI Institute is also helpful.