Since we don’t yet have flight-ready systems for getting to the outer Solar System much faster than New Horizons, we might as well enjoy one of the benefits of long flight times. Look at it this way: For the next ten months, we can look forward to sharper and sharper images and an ever increasing flow of data about Pluto/Charon and associated moons. It’s going to be a fascinating story that unfolds gradually, culminating in the July flyby next year, and then, of course, we can hope for further exploration of a Kuiper Belt object.

So New Horizons, launched in 2006, is going to be with us for a while, and it has already given us a brief look at asteroid 132524 APL and a shakeout of its science instruments during a gravitational assist maneuver at Jupiter. Now we’re getting down to much finer-grained imagery from Pluto. The first image distinguishing Pluto and Charon was returned in July of 2013. The latest imagery using the spacecraft’s Long Range Reconnaissance Imager (LORRI) shows Pluto’s diminutive moon Hydra, taken as part of a long-exposure strategy that controllers are using to search for other moons or debris near Pluto/Charon.

Interestingly, this report on the New Horizons site points out that the science team didn’t expect to detect Hydra until January. The spacecraft took 48 10-second images on July 18 and repeated the process on July 20, combining them to show the evidence of Hydra. 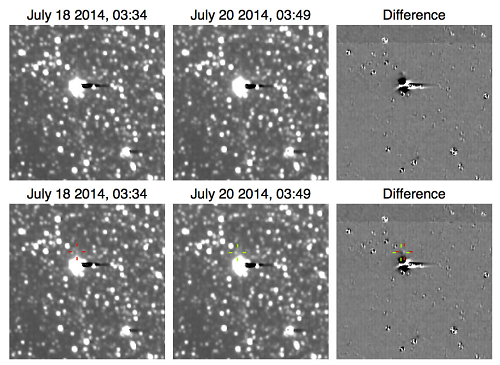 To untangle the image, start with the top row. With Pluto overexposed at image center, you can see a dark streak at the right that is an artifact of the imaging process. Both dates show similar images, but at the right is a ‘difference’ image that largely pulls out the background starfield. Here you can see Hydra as an overlapping smudge of bright and dark that appears immediately above Pluto in the image. In the bottom row are the same images, showing Hydra’s expected position on these dates as marked by red and green crosshairs. It’s tough to make Hydra out, but a close look at the enlarged image will identify it.

The JHU/APL article quotes Science Team member John Spencer as saying that at this point, Hydra is several times fainter than the faintest objects New Horizons’ camera is designed to detect. That’s good news overall because it speaks to the quality of the equipment as well as its operational status. It also confirms the efficacy of the plan to look for satellites and possibly hazardous smaller objects as the spacecraft approaches the system. Keeping New Horizons healthy and collision-free is obviously job number one — we only get one shot at this.

I also want to quote New Horizons co-Investigator Randy Gladstone (Southwest Research Institute) on the question of how we’ll study Pluto’s atmosphere during the flyby. We know, of course, that it’s low in pressure, mostly made up of molecular nitrogen with small amounts of methane and carbon monoxide, but Gladstone points out that models of the atmosphere are in disagreement because of the sparse data available. New Horizons will be engaged in survey observations that make few assumptions about what may be found, including a Pluto solar occultation operation:

The Alice ultraviolet spectrograph will watch the Sun set (and then rise again) as New Horizons flies through Pluto’s shadow, about an hour after closest approach. Watching how the different colors of sunlight fade (and then return) as New Horizons enters (and leaves) the shadow will tell us nearly all we could ask for about composition (all gases have unique absorption signatures at the ultraviolet wavelengths covered by Alice) and structure (how those the absorption features vary with altitude will tell us about temperatures, escape rates and possibly about dynamics and clouds).

We’ve only known about this atmosphere since 1988, when Pluto occulted a distant star. The refracted starlight observed then was hard evidence for an atmosphere. Like the atmosphere on Neptune’s large moon Triton, Pluto’s has a surface pressure of 30 to 100 microbars — that’s 3 to 100 millionths of Earth’s surface pressure. Sublimation of ices on the surface is responsible for what little atmosphere Pluto has. As Pluto continues to move away from the Sun following its closest approach in 1989, condensation should take over, but New Horizons should be getting there before the atmosphere has condensed back onto the surface.

And what about Charon? No evidence exists for an atmosphere there, but the moon is small enough that any atmosphere present would have to be considerably less dense than that on Pluto. While sublimation could produce gases that fed the atmosphere for a time, the tiny world would not be able to prevent their rapid dispersion into space.