“While other nations try to reach the moon, we are trying to reach the village,” said Julius Nyerere, who after serving as Tanzania’s first president retired to the village of his childhood. Mae Jemison likes to use this quote to introduce what she sees as a major theme of the 100 Year Starship project, which is that as we look for the extraordinary, we have the opportunity to impact things today. The connection between future and present is pivotal because spinoffs happen, and so does philosophy. Space is another platform from which to see ourselves.

It’s estimated that 500 million people watched Neil Armstrong step out onto the moon, the largest television audience for a live broadcast to that time. That impacts education and the making of careers as the surge in technicians and researchers in the Apollo era translates to role models for children and goals for the culture at large. In her opening address to the 100 Year Starship Symposium in Houston, Jemison said that the project’s goal is not to create a specific technology but to encourage a framework of ideas from which spinoffs occur:

“Radical leaps go beyond our personal experience, and farther than our eyes can see. Our goal is to foster radical leaps in technology that can only happen as the result of tackling a very difficult problem. We are not focused on launching an interstellar mission ourselves. We are focused on nurturing the environment for people to think about how it can be done one day, in the belief that by pursuing the extraordinary, we also create a better world today.” 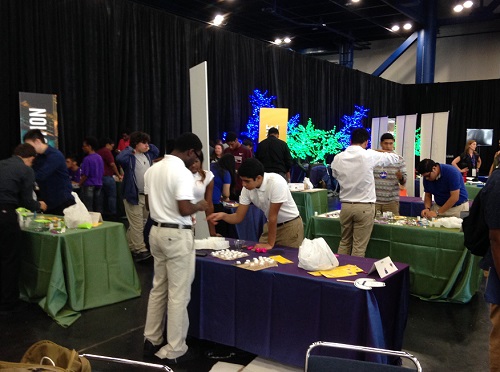 Image: Outreach at the 100 Year Starship Symposium. A shot of activity at the event called Expo Inspire, billed as an all-day learning experience with focus on space and science.

Jemison had just returned from the Jet Propulsion Laboratory, as had Claudio Maccone and Les Johnson, where a specific technology was beginning to come into focus. Centauri Dreams readers will know of my interest in the Innovative Interstellar Explorer mission concept developed by Ralph McNutt and his team at Johns Hopkins University’s Applied Physics Laboratory. McNutt was at the JPL meetings as well, where the topic was an interstellar precursor mission much in the same mode, a trip to 200 AU and beyond.

Once New Horizons reaches Pluto/Charon next summer, we will have no instrumented encounters in the outer Solar System unless a suitable flyby object in the Kuiper Belt can be identified. A probe to 200 AU and beyond, specifically designed as an interstellar precursor, would be the successor not just to New Horizons but to the Voyagers, whose journeys have fired the imagination of more than one generation. At our present state of readiness, even 200 AU is an extreme hurdle that demands innovation in propulsion and instrumentation.

In a way, this is a descendant of the TAU mission of the 1980s. TAU stood for Thousand Astronomical Units, a mission concept that grew out of a 1976 conference called ‘Missions Beyond the Solar System’ that was held at JPL. It’s quite a target: 1000 AU is 25 times the distance between the Sun and Pluto. In 1984, Lew Allen, then director of JPL, asked Aden and Marjorie Meinel to put together a team to figure out how to make the mission happen. The resulting study called for a small nuclear reactor-driven ion drive using xenon, with the goal of reaching 100 kilometers per second after ten years of sustained thrust. The 1000 AU target would be roughly 50 years away, with a launch thought to be possible by 2010. 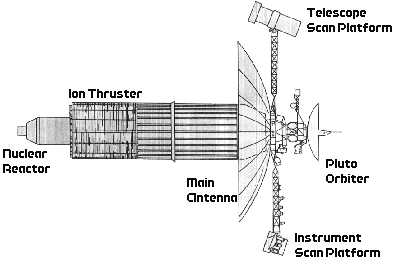 Image: One configuration of the TAU mission. Note the Pluto orbiter to be dropped off along the way. Interesting to speculate on the power requirements for that particular add-on.

The TAU mission never flew, like many design concepts that nonetheless contribute to the evolving framework of ideas that move the subject forward. We’ll keep a close eye on the latest JPL study. Meanwhile, the work on getting places faster continues to churn up new ideas elsewhere. At a session in the Propulsion & Energy track in Houston, David Chesney (Florida Institute of Technology) explored what he calls a Magnetic Reconnection Rocket, one that trades off things we observe in the Solar System. The solar wind blows particles out from the Sun into the heliosphere, at speeds between 400 and 800 kilometers per second. Coronal mass ejections can drive matter outwards at up to 3000 kilometers per second.

Are there possibilities here? The phenomenon of magnetic reconnection happens in plasmas, converting magnetic energy into kinetic and thermal energy and driving particle acceleration. Loop structures emerge in the solar atmosphere as a result of the phenomenon as field lines connect and disconnect with each other, releasing vast amounts of energy and further heating the plasma. What Chesney hopes to do is to reproduce this effect to produce reconnection in a much smaller area, offering higher thrust than conventional ion thrusters and, as Chesney describes it, taking ion propulsion to orders of magnitude higher efficiency. 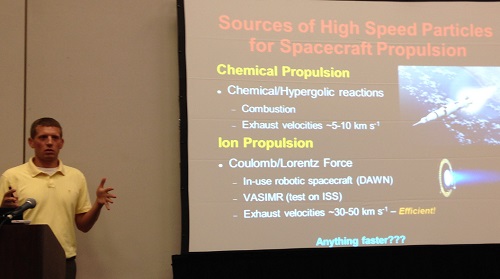 We’re out on the cutting edge here, dealing with a phenomenon that is not well understood. In fact, NASA has a mission called Magnetospheric Multiscale that is being developed at GSFC that involves not one but four spacecraft that will launch on a single rocket and fly in formation to study how magnetic reconnection changes the magnetic environment near the Earth, in the process sending fast moving particles into space with intense bursts of energy. Chesney believes the FIT work could lead to ion engines with higher efficiency and scalability.

We develop the things we need by studying the parameters of the problem to be solved, and when we make the problem truly difficult — the very definition of a starship — we open up a wave of speculation, theory and experiment. Interstellar missions in a rational timeframe (I define this as one century or less to another star) have no solution we can engineer today, which is why we keep all the lines of study open and stay alert for the outlier that may surprise everyone. Out of this new technologies emerge, with effects on society and culture we have yet to imagine. Push the process and you eventually get hardware. Keep pushing.