100YSS: An Encouraging Future for Sails

India can take great pride in the successful insertion of its Mangalyaan Mars probe into orbit around the red planet. At a cost of $75 million, the spacecraft is a bargain — Maven, which entered Mars orbit on Sunday, cost almost ten times as much. In an Associated Press story this morning, I noticed that B. N. Raghunandan (Indian Institute of Science) said that every time India launches another rocket, he is besieged with students asking how they can enter his school’s aerospace program. It’s the same effect I was talking about yesterday, in which inspirational achievements drive cultural perceptions and influence careers.

Meanwhile, I want to tackle solar sails this morning, prompted by Les Johnson’s presentation at the 100 Year Starship Symposium in Houston last week. What caught my attention here was the positive news Les had to share about what’s ahead in the pipeline. But to put it into context, let’s think about what has already flown in space. The Russian ‘sail mirror’ experiments called Znamya were pitched as an attempt to light up Siberian cities at night, but of course can be considered experiments in sail deployment, the first successful in 1993, the second a failure when it became entangled on an antenna on the Mir space station. 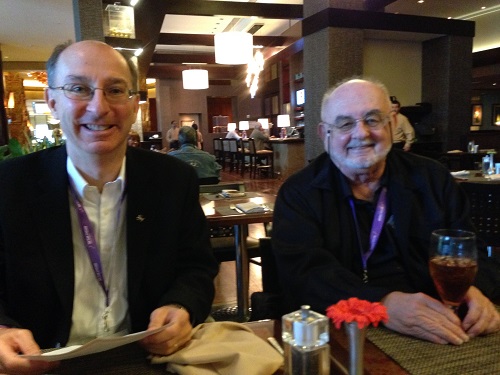 Image: Les Johnson (left) and Al Jackson. The latter, by the way, presented some startling ideas in Houston about how an extraterrestrial culture might use astronomical objects — including neutron stars and black holes — as ways of flagging its existence to other cultures. Al is writing up these SETI ideas for a future article on Centauri Dreams.

Since then we’ve had IKAROS, which flew as a secondary payload on a Venus mission, was spin-deployed, and is still active in and around the orbit of Venus. This is a story that caught a lot of people by surprise. I remember when I was watching the launch of this mission online and my wife came into the room. Looking over my shoulder, she asked what I was watching. “The Japanese are launching a solar sail,” I replied. She was headed out of the room as I responded, then came back. “You’re kidding,” she said, and just stood there watching.

The early success of IKAROS was a surprise to me because we had seen ground deployment experiments from NASA as well as from DLR, the German Aerospace Center, and a lot of us took our eye off what was going on with JAXA, the Japanese space agency. IKAROS was and is a thumping success, and one that deployed an ingenious electro-optical material to vary the brightness of parts of the sail in order to maneuver. That gets around trying to ‘tack’ the sail as one would with a conventional wind sail on the ocean, and Johnson said it was a marker for the future — the plan will be to avoid mechanical systems wherever possible, to keep things simple.

NASA’s NanoSail-D sails were actually cut down from one of the earlier 20 square meter ground deployment test sails, the first launched and lost in the attempt, the second (NanoSail-D2) successfully achieving orbit. Keep in mind that NanoSail-D, a 10 square meter sail, was not only a deployment test but also a look at how satellites might be de-orbited, using a small sail to create enough atmospheric drag to cause the satellite to burn up upon re-entry. There was no NanoSail model A, B, or C, by the way — the D has been variously said to stand for ‘demonstrate,’ ‘deploy,’ ‘drag,’ and ‘de-orbit,’ so you can take your pick.

And look at everything that’s coming up. The Planetary Society’s CubeSat-based sails, LightSail-A and LightSail-B, both using an aluminized 4.5 micron mylar film and sails of 32 square meters is on the horizon. We’re looking at April of next year for the first LightSail launch, which could well herald the era of small CubeSat missions driven by sail propulsion to Mars and other planets. NASA’s Sunjammer is also in the mix, though I’m waiting on a clarification from the builders as to its flight status.

Beyond LightSail, we have three different versions ranging in size up to 50 square meters of the European Space Agency’s Gossamer sail, the first of which has already been built and is awaiting a launch date. Developed in tandem with Germany’s DLR, the sails are designed as technological demonstrators with increasing levels of complexity in a scalable design. The first deployment will be of a 5 meter by 5 meter sail in a 320 kilometer Earth orbit, to be documented by at least four onboard cameras. The intermediate sail is 20 X 20 meters. 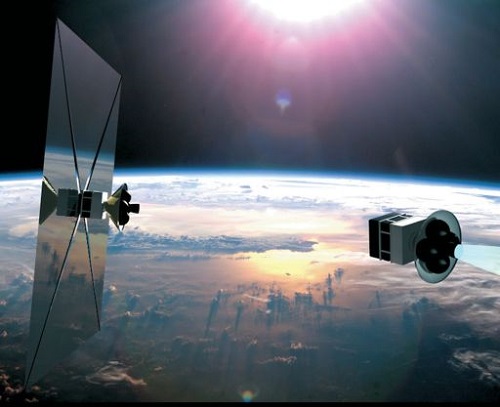 I’ll be looking in future days at some of the other possibilities, which include the University of Surrey’s CubeSail, with three CubeSat sail missions slated to fly in the next three years (emphasis here on de-orbiting spacecraft in low-Earth orbit), and the CubeSat-based Near Earth Asteroid (NEA) Scout, a solar sail prospector designed for eventual rendezvous with multiple NEAs to evaluate their possibilities for mining. And then there’s Lunar Flashlight, a CubeSat mission out of the Jet Propulsion Laboratory and Marshall Space Flight Center which will orbit the lunar poles to look for signs of water at the south pole.

As to JAXA: The long-range plan is to develop a joint ion propulsion/sail mission to the outer planets, so it’s clear that Japan will remain a force to be reckoned with in sail technology

Johnson pointed out that the key for our future sail ambitions is to learn how to make large sails in space. The worst place to work on a sail is on the ground, in a gravity well — we have to launch and safely deploy these huge structures. Most people watching the sail scene believe that we’ll ultimately be building sails that dwarf these early efforts in space using materials we’ve harvested from the asteroids. Then we can start the ramping up of sail technologies for true interstellar precursors.