Myriad Worlds, Some with Clear Skies

Like most people, I’m highly interested in the hunt for habitable worlds, planets that could truly be called Earth 2.0. But sometimes we need to step back from the ‘habitable’ preoccupation and think about the extraordinary range of worlds we’ve been finding. I’m reminded of something Caleb Scharf says in his new book The Copernicus Complex (Farrar, Straus and Giroux, 2014), in a chapter where he describes the work of Johannes Kepler and other astronomical pioneers. Kepler’s laws of planetary motion first told us that planetary orbits are ellipses rather than the perfect circles envisioned by the school of Ptolemy.

The implications are striking and lead us to expect just the kind of wild variety we find in the exoplanet hunt, where we’re uncovering everything from ‘hot Jupiters’ to ‘super-Earths’ and a wide variety of Neptune-like worlds. Says Scharf:

If planets follow elliptical paths as a general rule, and those paths need not be all within a single plane around a centrally massive star, the possibility exists for an extraordinary range of planetary motions and arrangements that nonetheless all obey Kepler’s rules (and what would soon be Newton’s physics). I doubt anyone suspected it at the time, but the door had been opened to a universe of far greater abundance and diversity than anything yet imagined, even by the atomists and pluralists of the past.

That’s a variety that carries its own awe — Scharf also talks about Galileo’s telescope and his discovery that the Milky Way, a seemingly smooth cloud of light, was in fact made of stars, something that would have surely set him back on his heels. We’re so lucky to live in a time when exoplanet discoveries are coming at such a rapid pace that we can share in the same kind of wonder.

Which brings me to the planet HAT-P-11b, the subject of new work out of the University of Maryland. Jonathan Fraine and team have been using transmission spectroscopy to study the atmosphere of this world. Here a planet is studied as it transits its parent star. The light of the star filters through the planetary atmosphere to provide us with the signatures of various molecules. What emerges about HAT-P-11b is the discovery of water vapor on a planet about the size of Neptune, the smallest world yet on which we’ve found water vapor. 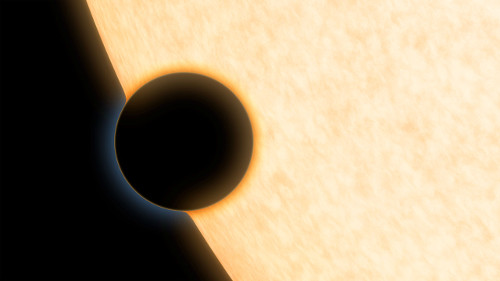 Image: How transmission spectroscopy (also known as absorption spectroscopy) works. As the planet passes in front of its star, starlight filters through the rim of the planet’s atmosphere and into the telescope. If molecules like water vapor are present, they absorb some of the starlight, leaving distinct signatures in the light that reaches our telescopes. Using this technique, astronomers discovered clear skies and steamy water vapor on the planet. Credit: NASA/JPL-Caltech.

As described in Nature, HAT-P-11b is a Neptune-class planet in a five day orbit around a star located some 120 light years away in the constellation Cygnus. It is four times the size of Earth and 26 times as massive. Exo-Neptunes are another marker for how other solar systems so frequently differ from our own. We’re used to our ice giants — Uranus and Neptune — being in just the kind of orbit we would expect them to have, far from the Sun and well beyond the ‘snowline,’ where ices can readily coalesce.

But now we have Neptunes in close orbits to account for, and this work on HAT-P-11b is helping us dig into their characteristics. We’ve already detected water vapor in the atmospheres of Jupiter-class planets close to their stars, their size making them natural targets for study, whereas the smaller exo-Neptunes have proven more difficult to probe. Thus far such planets have yielded evidence of nothing more than thick layers of clouds and haze. Four Neptune-class worlds have been studied as they transited their stars, all of them yielding no absorption features, probably because of clouds.

But HAT-P-11b evidently lacks the upper atmosphere clouds that might have concealed information about the molecular makeup of its lower atmosphere. Hence the discovery of water vapor, which left a strong signature. Nikku Madhusudhan (University of Cambridge), a member of the study team, comments on the work, which was accomplished with the help of the Hubble telescope’s Wide Field Camera 3, along with Kepler and Spitzer data:

“We set out to look at the atmosphere of HAT-P-11b without knowing if its weather would be cloudy or not. By using transmission spectroscopy, we could use Hubble to detect water vapour in the planet. This told us that the planet didn’t have thick clouds blocking the view and is a very hopeful sign that we can find and analyse more cloudless, smaller, planets in the future. It is groundbreaking!” 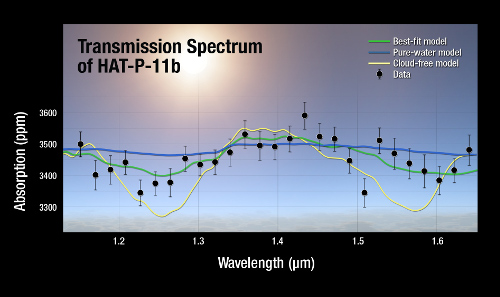 Image: A plot of the transmission spectrum for exoplanet HAT-P-11b, with data from NASA’s Kepler, Hubble and Spitzer observatories combined. The results show a robust detection of water absorption in the Hubble data. Transmission spectra of selected atmospheric models are plotted for comparison. Credit: NASA/ESA/STScI.

HAT-P-11b is not only the smallest planet on which water vapor has been detected, but it is also the smallest planet for which spectroscopy has been used to detect molecules of any kind. The work will be extended to other exo-Neptunes, and we can assume that methods like these will eventually be used to study ‘super-Earths,’ planets up to ten times the mass of Earth that have proven to be relatively common. The James Webb Space Telescope, scheduled for a 2018 launch, should be able to make similar detections for these interesting worlds.

And yes, we’re pushing toward rocky planets like the Earth as part of our quest for life elsewhere. But for now, let’s revel in the sheer diversity of the worlds we are finding.

Previous post: Primordial Origins of (Some) of Earth’s Water