A Surprise from Ligeia Mare

Interesting doings on Titan. I would guess that the odd feature that has cropped up in Ligeia Mare, a large ethane/methane sea in Titan’s northern hemisphere — has something to do with seasonal change, and that’s one possibility this JPL news release explores. After all, summer is coming to the northern hemisphere, and studying what happens during the course of a full seasonal cycle is one of Cassini’s more intriguing duties. Have a look at the image:

Image: These three images, created from Cassini Synthetic Aperture Radar (SAR) data, show the appearance and evolution of a mysterious feature in Ligeia Mare, one of the largest hydrocarbon seas on Saturn’s moon Titan. The dark areas represent the sea, which is thought to be composed of mostly methane and ethane. Most of the bright areas represent land surface above or just beneath the water line. The mysterious bright feature appears off the coast below center in the middle and right images. Credit: NASA/JPL-Caltech/ASI/Cornell.

We’re looking at a feature that covers about 260 square kilometers within the 126,000 square kilometers of Ligeia Mare (the latter is an area a bit larger than Lake Michigan and Lake Huron combined). My first thought was that this could be explained by evaporation, but JPL points out that the shoreline of Ligeia Mare has not changed noticeably in this period, which would seem to rule that out. For now, we can consider the feature an enigma and leave it interestingly unsolved, even as we continue to watch what happens as Titan continues into its cold summer.

Three different Cassini flybys were involved in the above imagery, demonstrating that whatever this is, it was not visible in 2007, appearing only in early July of 2013. The mission’s Visible and Infrared Mapping Spectrometer could not find the feature in late July and in September of that year, and low-resolution Synthetic Aperture Radar (SAR) images from October of 2013 also fail to show it. But by August of 2014 SAR can find the feature again, although it had changed in the eleven months since the last observation.

From the JPL news release:

The SAR observation from Cassini’s August 21, 2014 Titan flyby shows that the feature was still visible, although its appearance changed during the 11 months since it was last observed. The feature seems to have changed in size between the images from 2013 and 2014 — doubling from about 30 square miles (about 75 square kilometers) to about 60 square miles (about 160 square kilometers). Ongoing analyses of these data may eliminate some of the explanations previously put forward, or reveal new clues as to what is happening in Titan’s seas.

Possibilities under discussion include surface waves, rising bubbles and solids either floating on the surface or suspended just below it. Whether or not the enigmatic changes are caused by the approaching summer at the north pole of Titan, we’re learning a great deal about how the seasons impact the distant moon. The image below gives some idea of the effect. 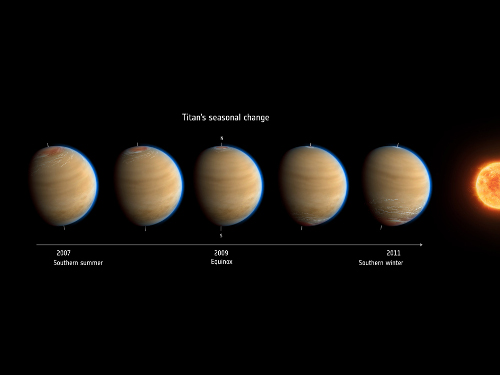 Image: This artist’s impression of Saturn’s moon Titan shows the change in observed atmospheric effects before, during and after equinox in 2009. The Titan globes also provide an impression of the detached haze layer that extends all around the moon (blue). Credit: ESA.

Notice the high-altitude red areas at the north pole in the earlier depictions, when it was summer in the southern hemisphere. These are apparent ‘hot spots’ amidst dense haze over the pole, in a period when the north pole was pointed away from the Sun. At equinox in 2009, both hemispheres are receiving equal amounts of sunlight and the red area is almost gone. As spring arrives in the north and the south plunges toward fall and winter, some of the haze over the north pole persists, but the hot spot is now to be found over the south pole.

Nick Teanby (University of Bristol) commented on the reversal in circulation of Titan’s atmosphere back in 2012, in an ESA news release following publication of a paper for which he was lead author in Nature:

“Even though the amount of sunlight reaching the south pole was decreasing, the first thing we saw there during the six months after equinox was actually an increase in temperature at altitudes of 400–500 km, as atmospheric gases that had been lofted to these heights were compressed as they subsequently sank into a newly forming southern vortex.”

Notice, too, the bluish layer of haze at higher altitude (400-500 kilometers), which can be seen in the limb of the moon throughout these images. It’s a separate layer from the now familiar orange smog that is produced by complex molecules filtering down into the lower atmosphere. We’re looking at a place that receives about 100 times less sunlight than the Earth does. Considering that a Titan year is almost 30 Earth years, the atmospheric changes we can make out in a period of months by Cassini’s close observation are startlingly swift.

Surely the huge area seen surfacing and partially disappearing again in the latest Cassini studies is related to all of this activity? But just what it is, and how that relationship would work, remain unknown. The Daily Mail quotes Emma Bunce (University of Leicester) as speculating that we might be seeing something analogous to an iceberg. An interesting thought, but all we can do now is continue to observe what happens next.