Curiosities like the unusual feature in Ligeia Mare we discussed yesterday emphasize how important it is to have a long-term platform from which to study a planetary surface. If we are looking at something related to seasonal change on Titan, we have to remember that each season there lasts about seven Earth years. Winter turned to spring in 2009 in the northern hemisphere and as we approach summer there, we’re seeing rapid activity. Studying these changes over time is essential if we’re to understand meteorology on the only moon in the Solar System with a dense atmosphere.

Alex Tolley mentioned in a comment to yesterday’s post that he wasn’t sure we should rule out evaporation as the explanation for what might be an emerging area of sea floor. The argument against that is that the shoreline of Ligeia Mare seems stable throughout this period, but we have a lot to learn about Ligeia Mare and the other Titan seas, and as Alex notes, it’s possible that we’re seeing erosion at work on a gentle sea-floor rise that is now being revealed. What we really need, of course, is something like AVIATR (Aerial Vehicle for In-situ and Airborne Titan Reconnaissance), a 120 kg unmanned aerial explorer that could fly at will over Titan’s landscape and give us stunning views of its mountains and lakes.

We do know that Ligeia Mare, an ethane/methane sea, is all but glass-like in its appearance, based on Cassini measurements from 2013. The spacecraft bounced radio waves off the surface, finding that the resulting echo was bright, an indication that any waves on Ligeia Mare would be smaller than one millimeter, the sensitivity of Cassini’s radar in the study. An earlier flyby studying Ontario Lacus had indicated a surface just as smooth there.

Immediately after the later Ligeia Mare news came word of another study of Titan’s weather. A paper just published in Nature describes a huge, toxic cloud that appeared over Titan’s south pole as the atmosphere cooled and autumn took hold in the region. As we edge toward winter there, frozen particles of toxic hydrogen cyanide (HCN) have been detected in this polar vortex, which is found some 300 kilometers above the surface. Lead author Remco de Kok (Leiden Observatory and SRON Netherlands Institute for Space Research) notes: “We really didn’t expect to see such a massive cloud so high in the atmosphere.”

The reason: Hydrogen cyanide can only condense to form these frozen particles when atmospheric temperatures get down to minus 148 degrees Celsius. This is fully 100 degrees Celsius colder than our previous models of Titan’s upper atmosphere. Cassini’s Composite Infrared Spectrometer (CIRS) confirms that the southern hemisphere has indeed been cooling rapidly as large masses of gas have been drawn south since autumn began in 2009. 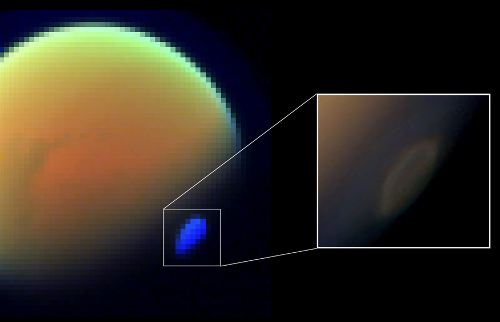 Image: These two views of Saturn’s moon Titan show the southern polar vortex, a huge, swirling cloud that was first observed by NASA’s Cassini spacecraft in 2012. The view at left is a spectral map of Titan obtained with the Cassini Visual and Infrared Mapping Spectrometer (VIMS) on Nov. 29, 2012. The inset image is a natural-color close-up of the polar vortex taken by Cassini’s wide-angle camera. Three distinct components are evident in the VIMS image, represented by different colors: the surface of Titan (orange, near center), atmospheric haze along the limb (light green, at top) and the polar vortex (blue, at lower left). Credit: JPL/Remco de Kok.

This is a region seeing much less sunlight as winter approaches but the frozen HCN molecules and the rapid cooling they represent appear to have caught researchers by surprise. Earl Maize (JPL) is Cassini project manager:

“These fascinating results from a body whose seasons are measured in years rather than months provide yet another example of the longevity of the remarkable Cassini spacecraft and its instruments,” said Maize. We look forward to further revelations as we approach summer solstice for the Saturn system in 2017.”

I wish writing about workable concepts like AVIATR didn’t seem so much like crafting a science fiction story, because this is a mission we can fly if we can get it funded, and other ideas for Titan surface exploration — from Titan Mare Explorer to various balloon designs — could provide not only priceless data but spectacular views from the distant moon. The problem isn’t a lack of ideas but the budgetary constraints that bedevil the space agencies. The Titan Lake In-situ Sampling Propelled Explorer (TALISE) was actually developed with Ligeia Mare in mind by SENER, a private engineering group, with the idea of landing a probe in the middle of the sea and cruising its coast for a six to twelve month period.

Over the long haul, we’ll want both landers and aerial craft, but I particularly like the option of being able to move quickly to observe features anywhere on the moon. Remember that flying on Titan is relatively simple. You’re dealing with a much reduced gravity well and a dense atmosphere. The designers think that AVIATR could stay aloft for a year, drawing power from Advanced Stirling Radioisotope Generators (ASRG), a stable platform for continuing observations. Imagine if we had it available to check out that odd object in Ligeia Mare!

Next post: How Common Are Potential Habitable Worlds In Our Galaxy?