The interstellar mission that Dana Andrews describes in his recent paper — discussed here over the past two posts — intrigues me because I’m often asked what the first possible interstellar mission might be. Sure, we can launch a flyby Voyager-class probe to Alpha Centauri if we’re willing to tolerate seventy-five thousand years in cruise, but what would we accept by way of acceptable cruise times? The lifetime of a human being? Multiple generations? And if we had to launch as soon as possible, what would the mission parameters be?

The mission that Andrews conceives grows out of questions like these. I can say upfront that this isn’t a mission I would want to fly on. For one thing, it’s a generation ship, so entire lives will be spent in cramped quarters, and the prospect of being overtaken by a later, faster ship is always there. But that’s not the point. 18th Century voyagers with a yen for the unknown could have waited for the age of steamships, but how could they have anticipated it? In any case, waiting would have cost them the journey that was in front of them. I think there will always be pioneers in search of experience unique to them, the first to step onboard as long as a viable mission presents itself.

Yesterday we looked at various propulsion strategies for Andrews’ starship, including a personal favorite, the Sailbeam design of Jordin Kare, which uses tiny micro-sails driven by laser as a stream of beamed energy that can be ionized when it arrives at the ship, providing thrust to a magsail. Dana Andrews knows a lot about magsails — working with Robert Zubrin in 1988, he showed that Robert Bussard’s interstellar ramjets would produce more drag than thrust, and the idea of turning a magnetic scoop into a magnetic sail began to grow. We’re seeing that it can be used both for acceleration and deceleration upon arrival. 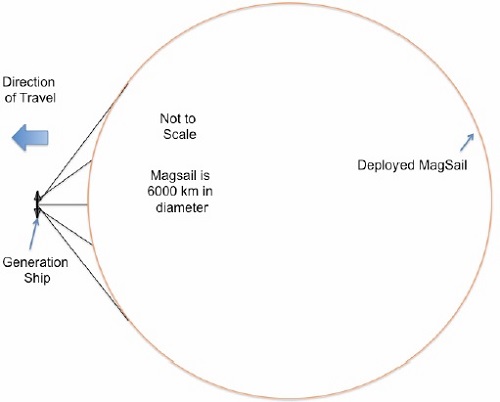 Several decades before the Andrews/Zubrin paper, Robert Forward had been taking note of laser developments at Hughes Research Laboratories in Malibu, CA. He already knew about solar sails, which had appeared in the work of Konstantin Tsiolkovsky and Fridrikh Tsander in the 1920s and which had been the subject of a technical paper by Richard Garwin in 1958. As a science fiction writer, Forward was surely aware as well of Carl Wiley’s “Clipper Ships of Space” article, which appeared under the byline Russell Saunders in Astounding Science Fiction. Why not, Forward mused, boost a solar sail with a laser?

I can see why Andrews included Forward’s laser lightsail ideas in the current paper, but the magsail seems like a far more likely candidate for the near-term mission that he describes. Even working with a minimal Forward configuration, we still have to solve problems of deployment and infrastructure that are huge, including, in Andrews’ calculations, a beam aperture fully 20 kilometers in diameter. He goes on to describe a lightsail mission with acceleration of 0.05 gees that reaches 2 percent of c in 155 days at a distance of 267 AU. “The minimum cost system is to invest in really good stationary optics,” he adds, “thereby allowing less power and smaller sails, but then beam jitter begins to dominate.”

We quickly examined four different near-term interstellar propulsion concepts. Each has its issues… The laser-powered ion thruster needs aggressive weights for the design to close, but has no obvious showstoppers. The Neutral Particle Beam concept appears workable at planetary distances, but requires very high acceleration and power levels to maintain divergence angles of one microradian or more. Projecting a beam of neutralized particles presents the problem of re-ionizing a dispersed cloud of particles, which is a definite showstopper. The Sailbeam propulsion has potential, but needs tests of the acceleration capability and is still power hungry (~4000 TW of electrical power for the example presented here). Even at 4000 TW it needs pointing accuracy better than a nanoradian to finish the acceleration. The laser-lightsail actually came off as relatively low risk at 800 TW of electrical power, but that is very dependent on the availability of a 20 km diameter diffraction-limited steering optic, and a one-gram/m2 lightsail (both risk factor 4+).

What makes predictions about spaceflight so tricky is that we can’t anticipate the emergence of disruptive technologies. The risk factors that Andrews develops as he looks at the progress of interstellar flight are, by his admission, estimates and ‘guesstimates,’ which is about the best we can do, and he characterizes near-term technologies as less than risk factor 4. 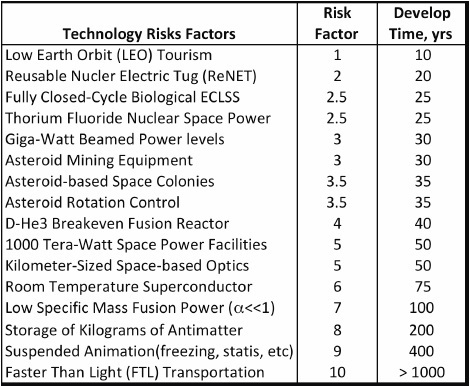 We can all find things we might take exception to here and there in this list. You can see, for example, that Andrews characterizes a breakeven fusion reactor at risk factor 4, with a 40 year development time. Fusion has wreaked havoc with our predictions since the 1950s, and I think it’s optimistic to hope for working fusion power-plants even within this timeframe, though I know fusion-minded people who think we’re much closer. Fusion for starship propulsion he ranks at a risk factor of 7, needing 100 years to develop. Notice, too, that for the purposes of this mission, freezing or suspended animation are ruled out as being at risk factor 9, which would place their development 400 years out. A disruptive advance could negate this.

I find it useful to lay out our assumptions in such direct form. The biggest question I have regards fully closed-cycle biological ECLSS (Environmental Control and Life Support Systems). At a risk factor of 2.5 and 25 years of development, we could deploy these technologies on a generation ship, but will they be tested and ready by late in this century, when the starship would presumably be launched? My own guesstimate would lean toward a higher risk factor and 50 years for development, a tight but perhaps possible fit.

Other things the ship will need: Protection against galactic cosmic radiation (GCR), which Andrews proposes may be resolved by using magnetic fields to deflect charged particles away from the crew areas. He gives the topic a fuller discussion in a 2004 paper (see citation below). Dust in the interstellar medium poses a challenge because at 2 percent of c, impacting particles become plasma and can cause erosion to the spacecraft. Andrews notes this will need to be addressed in any starship design but doesn’t elaborate.

The conclusions [Andrews adds] are that near-term interstellar colonization flights are not completely science fiction, but there has to be a powerful requirement to generate the funding necessary to work many of the problems identified. The alternative is to wait a hundred years or so for low specific power fusion, or much longer for warp drive. We’ll see.

The paper is Andrews, “Defining a Near-Term Interstellar Colony Ship,” presented at the IAC’s Toronto meeting and now being submitted to Acta Astronautica. The 2004 paper is Andrews, “Things To Do While Coasting Through Interstellar Space,” AIAA-2004-3706, 40th AIAA/ASME/SAE/ASEE Joint Propulsion Conference and Exhibit, Fort Lauderdale, Florida, July 11-14, 2004.