A Planet Each for Stars in Binary System

The WASP Consortium (Wide Angle Search for Planets) has come up with an interesting find: Two new Jupiter-class worlds, one around each star in a binary star system. Both are ‘hot Jupiters,’ a class of planets that is susceptible to discovery by transit methods, as in this case, and radial velocity as well. Consisting of two robotic observatories, one on La Palma (Canary Islands) and the other in South Africa, WASP has a proven track record, having found over 100 planets since 2006. WASP-94A and WASP-94B, like all WASP candidates, were confirmed by radial velocity techniques through a collaboration with the Geneva Observatory.

The two stars are about 600 light years away in the constellation Microscopium. In this case, it was the WASP-South survey team that noticed dips in the light of WASP-94A, the mark of a likely hot Jupiter, with WASP-94B being found by the Geneva team during the confirmation process for the first planet. “We observed the other star by accident, and then found a planet around that one also!”, says Marion Neveu-VanMalle (Geneva Observatory), lead author of the paper on this work. 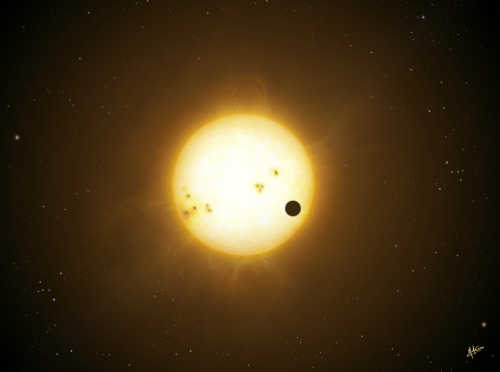 We’ve sometimes speculated in these pages about a close binary system like Centauri A and B, wondering whether there could be planets around each star, a matter that remains undecided. WASP-94A and WASP-94B are in a much different situation — the estimated separation between the two is 2700 AU. The paper lists three other binary systems with pairs of planets. Like WASP-94, HD20782/HD20781 is a wide binary, with HD20782 hosting a Jupiter-mass planet and HD20781 two Neptune-class worlds.

We also have Kepler-132, an interesting system hosting three ‘super-Earths,’ with an angular separation too small to allow us to tell which of the two stars the planets are transiting, although researchers believe that the two planets with the shortest periods cannot be orbiting the same star. Finally, there is XO-2, another wide binary in which one star hosts a transiting hot Jupiter, while the other hosts two gas giants, one Jupiter-class, the other the mass of Saturn.

We may learn something interesting about the formation of hot Jupiters from the WASP-94 system. Planets like these should form far enough from their primary to allow ices to freeze out of the protoplanetary disk, while being later forced, presumably through interactions with another star or planet, into the inner system. The paper comments: “The discovery of a hot Jupiter around each star suggests that the same formation process took place and that similar favorable conditions boosted the migration of the planets.” Interactions between the two stars are problematic given the large separation but this may help us stretch our theories:

Even though at this stage nothing can be proven, there are recent dynamical theories relevant to this system. Moeckel & Veras (2012) described interactions in which a planet orbiting one component of a stellar binary can ‘jump’ to the other star. If the two giant planets were formed around the same star, planet-planet scattering could have occurred. This would have pushed one of the planets near the host star and ejected the second one, which could then have been captured by the stellar companion. As we do not know the eccentricity of the stellar system, we can also consider the ‘flipping machanism’ described by Li et al. (2014), in which a coplanar system leads to very high eccentricities for the planet.

We may also find the WASP-94 system valuable on other grounds. Like most of the WASP planets, WASP-94A and WASP-94B orbit stars that are relatively bright — most of the Kepler stars, by contrast, are faint. This Keele University news release quotes the university’s Coel Hellier speculating on the possibility of atmospheric studies through transmission spectroscopy, where the atmosphere of the transiting world can be analyzed as it moves onto and off the stellar disk during a transit. I can scarcely imagine what John Herschel, who first observed this stellar system back in 1834, would have made of possibilities like these.

The paper is Neveu-VanMalle et al., “WASP-94 A and B planets: hot-Jupiter cousins in a twin-star system,” in press at Astronomy & Astrophysics (preprint).